A short video visualizes Meta’s vision of a future office: the fluid change between AR and VR in a productive environment. However, it doesn’t come from Meta.

The start-up Immersed is getting into virtual working. With the app of the same name, it already offers a VR office environment for Quest 2, where you can either meet virtually with other avatars or place digital screens in reality.

Immersed is currently presenting itself on the NFT platform Premint.xyz to potential investors looking to sink their money into virtual property. The start-up uses the following short video, which has since been deleted from the site.

The demo probably shows the Immersed app with the color AR passthrough of the Quest Pro. This feature is confirmed and was already presented by Meta CEO Mark Zuckerberg.

In the Immersed video, we see freely arrangeable digital screens that could replace traditional monitors, smooth switching into a VR meeting with avatars, and integration of real objects into the VR environment, in this case, the keyboard. Metas Horizon Workrooms also offers these features in part, which already work with Quest 2.

What’s new and interesting about the video is, firstly, the brief look through the lenses at the color pass-through image of the Quest Pro, as well as a screenshot of the back of the VR AR headset looking at the lenses. Here you can also see a face cover that blocks side light for fully immersive VR. Previously leaked footage showed a more open design. Quest Pro will likely offer both modes. 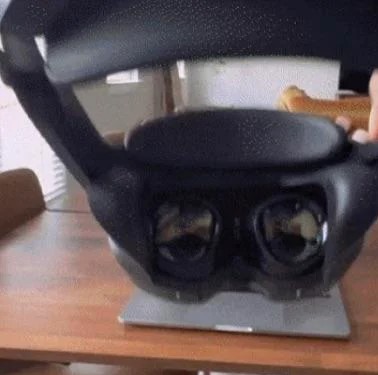 It is not confirmed that the headset is indeed Quest Pro. Furthermore, we don’t know if the Passthrough-part of this video has been post-processed or actually shows the direct camera view of Quest Pro. There is hardly any difference between the original and the video image, which rather points to post-processing. However, the quality of the short video is very low, which masks any image errors.

Concrete information will be available soon: Quest Pro will be unveiled on October 11 at the XR Connect conference and is scheduled for release in the same month.