The popular strategy game Stellaris is getting its first VR spin-off, “Ghost Signal”. I played it at Gamescom 2022.

That said, I was happily surprised when Fast Travel Games (Cities VR, The Curious Tale of the Stolen Pets) presented me with a Stellaris spin-off for virtual reality behind closed doors at Gamescom 2022. In August, it was still under the working title “X 15”, but now the title is out. Ghost Signal: A Stellaris Game is a rogue-lite in the Stellaris universe.

But will it also be a good Stellaris game?

The gameplay is simple at first glance. I fly with my spaceship Aurora through different levels in search of the mysterious “Ghost Signal”. In the process, I collect resources and fight enemy spaceships that come at me in waves.

Aiming is done by the spaceship itself, I just have to indicate the approximate direction and then choose the right weapons. Various big ships just want to ram me away, so I’d better light them up quickly with missiles.

If they get too close to me, I have to dodge them with a speed boost at just the right moment. In general, I can push the Aurora in a zigzag course through the space scenery and past asteroid clusters. I use waypoints to program the trajectory, which frees up time for the rest of the action.

As the game progresses, things get hectic and I have to learn to master the VR controller’s button assignments perfectly. This requires practice, and before I have it, my spaceship explodes. Then I start the journey through space all over again. Rogue-lite, that is. 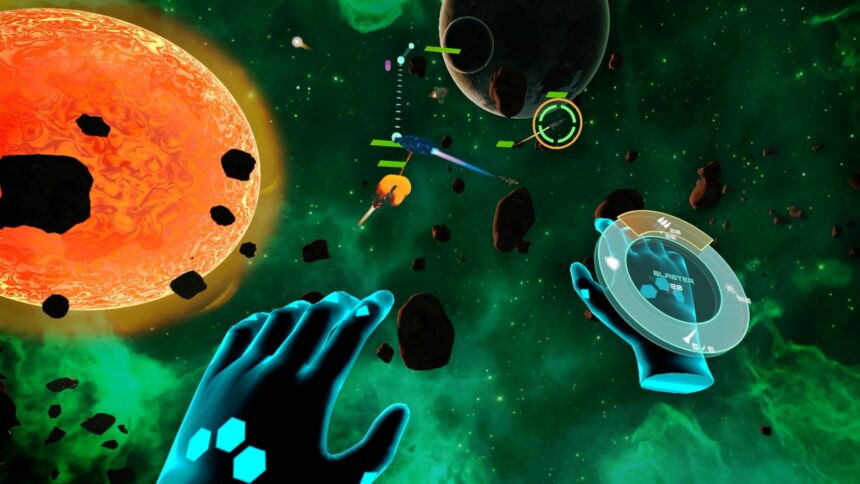 Space in Ghost Signal: A Stellaris Game is full of enemies and nasty traps that threaten our spaceship. | Image: Fast Travel Games

At least I keep my experience and resources, research permanent upgrades in various tech skill trees, and install new destructive weapons. On my way, I not only find enemies but also come across friendly familiar alien races from the Stellaris universe who trade with me. It is questionable whether these interactions later get more in-depth than three selection buttons with materials or weapons.

In addition, there are various challenges, such as giant space creatures that – if I don’t leave quickly enough – intervene in battles and give me unpleasant surprises. Hesitated a bit too long? Then I end up as space debris again.

Ghost Signal: A Stellaris Game is coming in 2023 for Quest 2

To keep things interesting, the maps I visit are randomly generated. In addition, daily challenges and leaderboards supposedly provide motivation later on. Will that be enough? I don’t dare to make a prediction yet, the play session was too short. 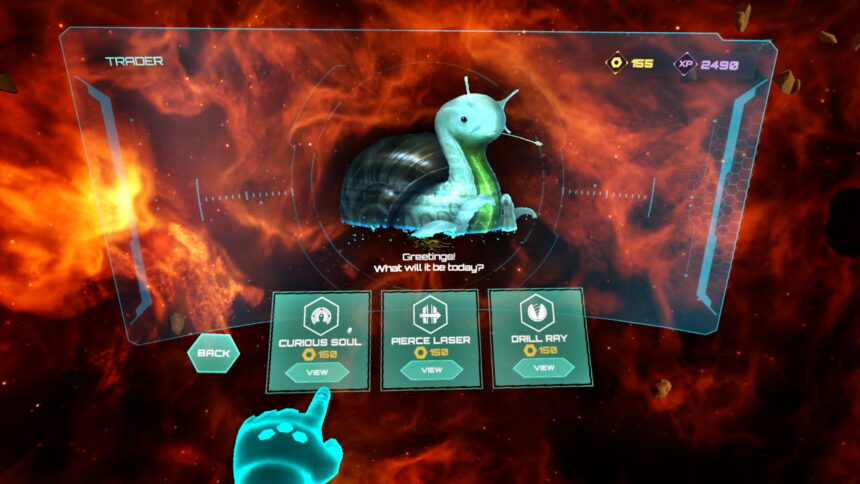 Basically, I’m happy about any VR game that isn’t a first-person shooter, and even more so if it makes use of a good IP. Sure, I would love it if I could experience Stellaris completely in VR. Ghost Signal is “just” a relatively straightforward game in this glorious gaming universe.

I did like the mood of the VR game, though. Whether it also conveys Stellaris vibes over a longer period of time or whether the repetitions become monotonous too quickly remains to be seen.

Ghost Signal: A Stellaris Game looks much better than the loveless screenshots from the PR department show and seems to have some motivating elements. The controls are well thought-out but, typical for Fast Travel Games, they are only implemented via controller menus. When will the studio discover the power of 3D elements for VR games?

Ghost Signal: A Stellaris Game by Fast Travel Games will be released in early 2023, exclusively for Meta Quest 2. In the meantime, you can check out Eternal Starlight, a similar game that has already been released for Quest 2.