Cities: VR could have been the greatest city-building simulation for VR – after all, the Cities: Skylines brand stands behind it. But the VR version shows that 2D games cannot be ported to VR just like that.

This is a very sad review for me. Everything about it drags me down. Because while Townsmen VR is a terrific plea for virtual reality, Cities: VR impressively and painfully shows how not to do VR.

Not only that, but it’s grist to the meta-haters’ mill because this game should never have been released like this for Quest 2. Anyone who passed it either didn’t understand VR or simply didn’t care.

Cities: VR review in a nutshell

Cities: VR is horrible to look at. Objects pop up everywhere, trees and cars change their appearance constantly, from reasonably detailed to completely unrecognizable. White areas or grids flicker like crazy, lights and shadows jerk around, and shadows look like saw blades. The most beautiful thing about Cities: VR is the night sky. The controls are as intuitive as starting an engine with a crank and are reminiscent of Bethesda’s laziness in creating decent VR menus for Skyrim and Fallout 4.

On the positive side, the entire Cities: Skylines game has been ported to VR. The controls for constructing roads, buildings, and zoning also work well enough.

Apart from the muddy graphics and the occasional tracking and display dropouts, however, there is a much more important point that makes Cities: VR bad: There is never a VR feeling. Even when I go down to street level, the entire environment remains strangely lifeless and static. It doesn’t feel like true virtual reality, like it’s not real 3D. There is a complete lack of plasticity and wow effect.

For Cities: VR, Cities: Skylines was loaded onto the Quest 2, the graphics were edited until they ran reasonably smoothly, and then cheap menus were added. That’s no fun!

Cities: VR isn’t your thing if …

Cities: VR is the complete base game of Cities: Skylines on a 2×2 kilometer map called a “tile”. A tutorial shows how I move around in VR. With the left analog stick, I move forward or backward smoothly and slowly. With the right analog stick I turn or “snap” to “right” and “left”. “Down” brings me almost to street level, “Up” creates more overview. The “A” key is reserved for quick teleport, the “B” key takes me back to the previous menu.

The latter is an unfortunate assignment because the build menus, which are arranged as a circular menu on the left virtual controller, are quite deep. Thus, I have to select several times with the left analog stick until I reach the desired blueprint. If I want to return to a previous menu, I have to press B. However, this is not as easy for me and my average-sized hands to reach as it would be for this function. This quickly gets on my nerves.

The user interface is pretty bad

As mentioned earlier, the circular menu is not very intuitive. Townsmen VR has solved this much better, with real 3D models that I can easily grab or select via pointer. Little Cities (preview) also uses an adapted 3D menu that supports motion control by selecting and deselecting via hand/controller.

In Cities: VR, I can use the right touch controller’s laser pointer to place roads, buildings, city areas, water pipes and power poles easily and also quite precisely. As my city grows, I unlock more and more buildings, like police, fire departments, parks, and more. Overviews of the individual areas, such as electricity and water supply, public transport or finances, can be found in another menu. 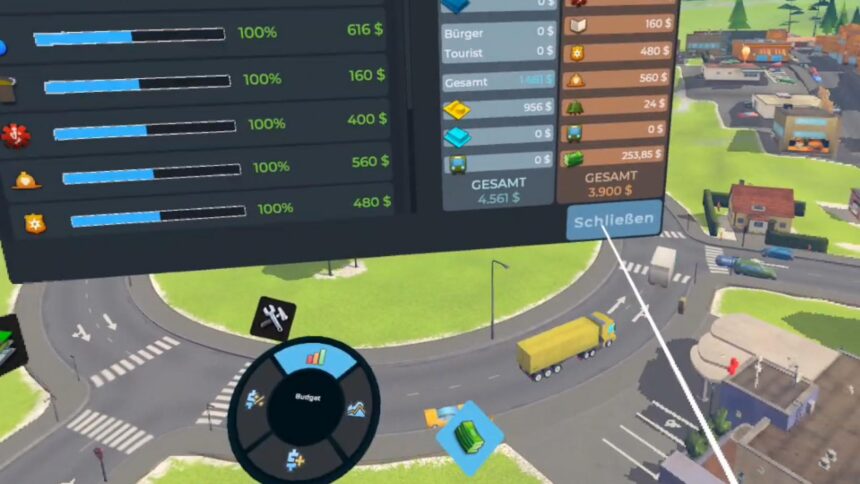 Switching between build and overview menus is, by the way, the only process rudimentary adapted to modern VR menus: Three flat (!) menu icons (see screenshot) float in front of me, and I make a selection by moving the VR controller towards the menu icon.

Cities: VR will hurt your eyes

While the core gameplay works well, the rendering is atrocious. I can hardly remember the last time I saw such muddy textures. Trees are barely recognizable as such. If I turn my head a little at a certain distance, they turn into completely unsightly texture blocks.

Cars have an incredibly low-resolution base model, like washed-out little cardboard boxes. A slightly more detailed textured model only appears up close. From a certain distance, this goes so far that a tractor model becomes an indefinable pile of pixels.

Despite all the understandable performance limitations when developing for a mobile platform: Meta, Paradox Interactive and Fast Travel Games should have questioned the sense of a 1:1 port of Cities: Skylines at this point at the latest. Wouldn’t it have been better to create a separate concept for Quest 2 based on a possible Cities: Skylines 2? Or simply develop a PC VR version that works via Link Cable or Air Link?

I’m serious: your eyes will hurt

The white building grid flickers extremely at night, as do the illuminated windows. While in the PC version I still have a reasonably working illusion of illuminated windows even when zooming in on houses, this doesn’t work at all in virtual reality: Here, every workaround, every weak texture, every botch-up comes out clearly and cannot be hidden.

The poor graphics do not end with a few bad windows. From a certain distance, all details are faded out: Lanterns, trees, air conditioners on buildings and many other details. In the case of electricity pylons, the cross-bracing is removed after just a few meters – what remains is a leftover structure that won’t withstand the next gust of wind. 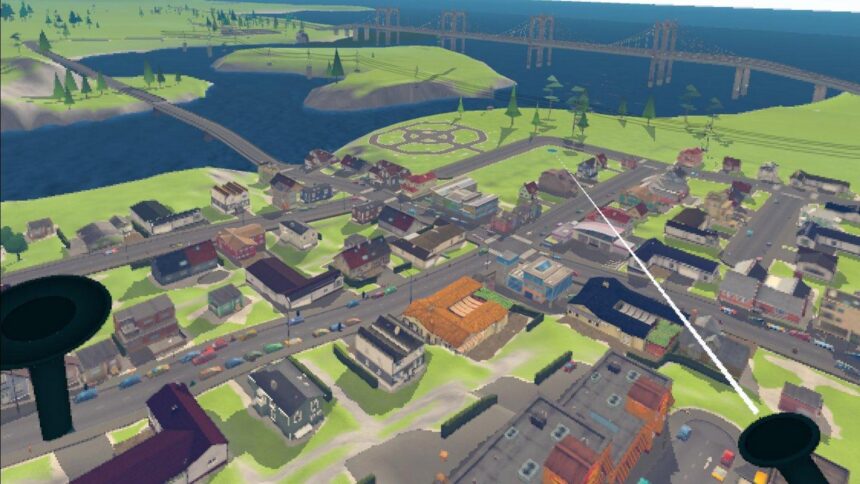 From a certain distance, objects are simply completely hidden – for example, all the trees in the park.

The strict fade-out mechanism causes assets to constantly jump in or out of the frame everywhere. I have never played such a choppy VR game. This is especially noticeable in parks: All trees suddenly jump out, so that only the ground plan and the paths are visible – but the shadows of the trees remain for a while.

The shadows themselves look like saw blades – the aliasing is horrible. 16-bit pixel games produce more convincing shadows. In addition, the light and thus also the shadows do not move smoothly, but jump a bit every second. This is not so noticeable on the PC monitor in the original game – in VR, however, it conveys the feeling of experiencing a slide show at the highest game speed. 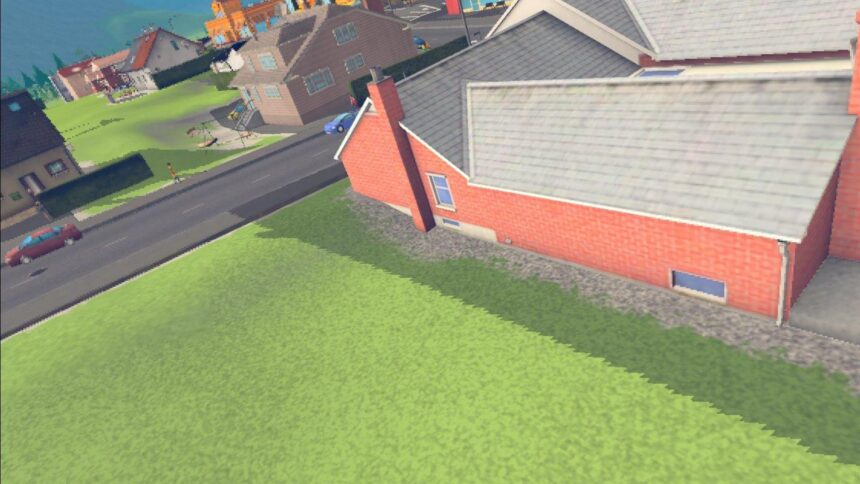 Cars and streetlights emit almost no light at night. I don’t know whether this is a bug or to improve performance – but it fits into the overall picture.

Despite the poor graphics, the performance is still not great. Cities: VR can occasionally stutter when moving through the city with the analog stick. Furthermore, the Guardian grid appeared several times even though I was sitting quietly in the center of my play area. A couple of times the image in the center went black, and I got a very brief, unreadable error message, possibly about a tracking error. I can rule out that it was due to the environment or brightness.

Cities: VR is a story full of (intentional?) misunderstandings:

I am disappointed – but also by myself. From the first trailers, I could have guessed that Cities: VR was not a sensible project. Cities: Skylines is far too complex to be easily ported to the Quest 2 with decent graphics. Little Cities shows how it can be done better: sharp assets and intuitive 3D menus.

Instead, Fast Travel Games simply ported Cities: Skylines as is, with the most necessary adjustments for VR. The heavy graphics downgrade ensures a mostly decent performance – but at what price? There are glitches everywhere, objects and textures pop up. The following video gives you an impression.

VR does not deserve that. Nor does Quest 2. Other studios have already proven that the mobile VR headset is capable of complex VR games as well — if you optimize these games from the ground up for VR and the mobile platform.

Choosing Cities: Skylines as a cheap port was the wrong choice and hurts VR more than it helps. Simply throwing players into a PC game that has been trimmed down for VR is not enough. We should quickly forget this failed attempt. And Meta should rethink its demands on quest developers.

Note: The screenshots and videos in this article were created using the Quest 2’s recording function.