Does Bonelab bring creative release, or does disillusionment follow the hype? I threw myself into the wild VR game for Quest 2 and PC VR.


Bonelab promises more than just a VR shooter. Changing game characters with completely different proportions are supposed to convey a crazy body feeling. In the blink of an eye, the fast-sprinting character becomes a massive warrior or a small cat for navigating narrow secret passages.

In addition, there is an experimental area with physics games, mods, and bonus modes, including a horde mode full of firearms or an alley with gigantic bowling balls. Can the indirect successor to Boneworks convince with its chaotic mix or has Stress Level Zero overdone itself this time?

Bonelab Review in a nutshell

Bonelab offers a playground full of physics experiments, mods, and challenges for single players. However, the cool new mechanic of changeable bodies unfortunately only comes into play towards the end of the campaign. I was also disappointed by the too-easy battles, a lack of comfort options, and the sometimes confusing staging.

Bonelab is suitable for me if I …

Bonelab is less suitable for me if I …

Wild escape in a VR shooter

The story puts me in the role of an outcast who escapes execution at the last second. After my escape through medieval dungeons, I quickly end up in a strange lab full of tests and physics gadgets.

Mods to the game, as well as Horde modes, are also available at a terminal.

So this hub with various bonus modes is part of the story here. Unfortunately, Stress Level Zero embedded it into the story in a somewhat jumbled fashion. Only after wandering around the lab for a while and trying out some challenges did I figure out how it was all connected. Only then did the exit to the rest of the story mode open up.

In general, it’s not that easy to decipher all the meta-levels of the narrative. Even if I read all the scattered text panels and pay close attention in the surreally staged cutscenes, a large part of the story can pass me by, such as the allusions to Meta’s Horizon Worlds. I learn some details from the mysterious off-screen voice, which even makes useful things like a knife appear.

Obviously, some things went wrong in the simulation of a medieval fantasy world. Again and again, I am attacked by clattering skeletons, mages, religious fanatics, or even the “Nullbodies” already known from Boneworks, who stagger towards me as glowing wireframe models.

As in the predecessor, I can freely choose how I deflect attacks. Mostly my opponents get to taste lead from all kinds of pistols, shotguns, or assault rifles.

Physics gimmicks for Quest 2 and PC-VR

Even during manual reloading, the physics engine plays an important role. Obstacles like a railing can delay the process or cause a silly twitching of the hand.

Nevertheless, considerably less care is required than in the survival shooter Into the Radius (review). In Bonelab, an empty magazine even slips out of the weapon automatically during reloading. 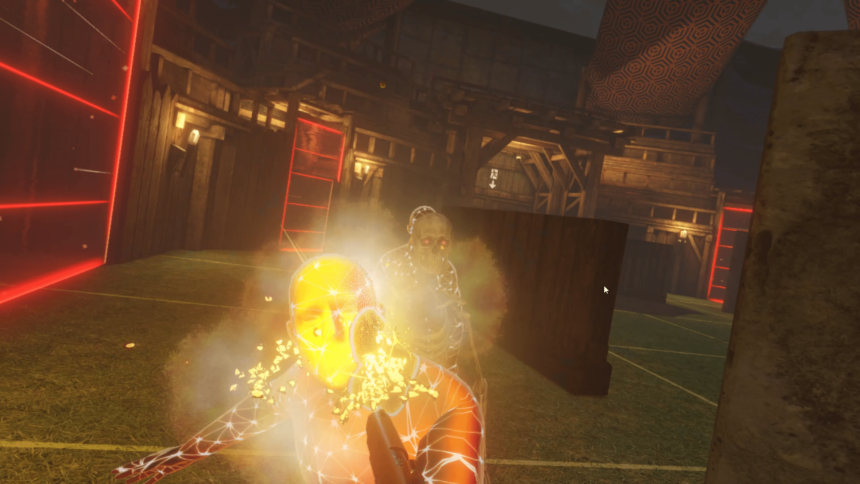 In the second level, challenges await the players – until they solve a puzzle and find the exit to the rest of the story. (Screenshot: PC) | Image: Stress Level Zero, MIXED

The weak enemy AI usually encourages me to simply leave firearms behind and switch to melee combat. Even stronger patrols with assault rifles walk through the rooms surprisingly inattentive. Most of the time, I just sprint out of cover, hit them with the sledgehammer, and then easily finish off two more colleagues.

The nail club, morning star, and other weapons also prove effective. I can even turn garbage cans or shopping carts into weapons. The physically correct implementation at least provides some fun in the fight, even if it lacks challenge.

Similar to The Walking Dead: Saints & Sinners (review), the weight of heavy objects is really noticeable. An axe only develops enough force with two hands and at the right angle. Heavy conference tables and other things also feel appropriately heavy when moved.

The disadvantage of the hefty physics engine is that my character gets tangled up in the environment relatively often. Especially when climbing between twisted scaffolding and swinging ropes, inaccuracies in the controls gave me some annoying falls into the depths.

This problem is somewhat alleviated by the cool new body swap between characters. This mechanic is unfortunately only unlocked towards the end of the roughly six-hour campaign, but then provides the most entertaining moments in the game. 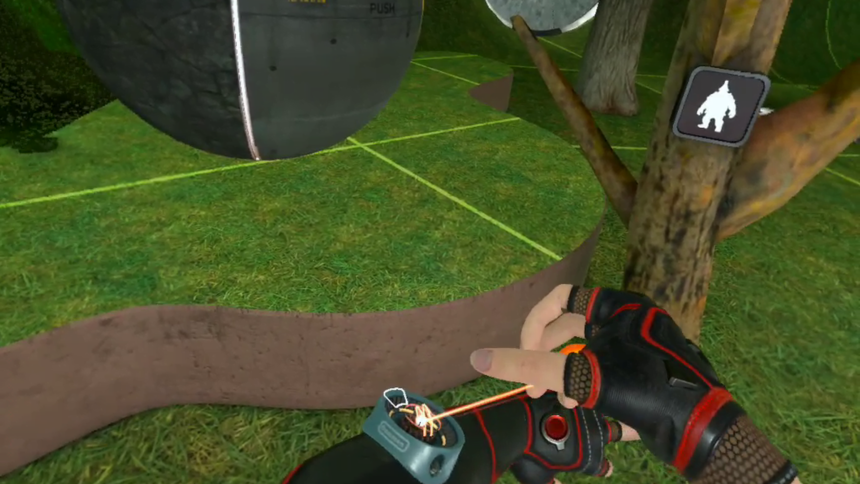 Before a balancing act over narrow beams, I simply change into an agile runner, who can bridge larger chasms with a faster run-up. Or I change to a long lunger, who reaches higher swing ropes with his spindly arms.

As a small cat I crawl through narrow ventilation shafts and as a massive metal warrior I heave skeletons off the cliff or push large balls into pits. There is also a lightweight pilot, with whom I finally jet over a short cart track.

The change of characters doesn’t bring a completely new body feeling (apart from the rather unfamiliar view of my own cleavage), but a welcome change to the game. It is praiseworthy that arm movements are not implemented exactly, but relatively. Only when my hands reach my shirt do the virtual fingers also touch the well-fed belly of the massive warrior.

Thanks to these tricks, the last hours of the campaign are much more entertaining than the tough start. Small detours into hidden ventilation shafts or over fast treadmills create nice little aha moments again and again. The excursions are usually accompanied by appropriately fast-paced dubstep and synthpop sounds.

Shortcomings in the balance

Away from the abilities, however, weaknesses in the puzzle design are noticeable. In Red Matter 2 (review) or Lone Echo 2, I found it almost uncanny how motivating the puzzle mechanics were to my abilities as an averagely clever adventure gamer. There, I almost always came up with the right idea after a few minutes. 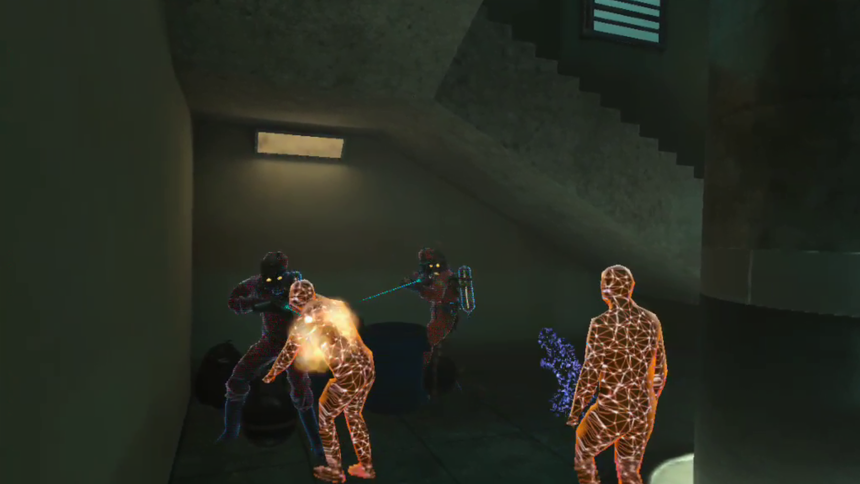 In Bonelab, on the other hand, the balance wavers even when you’re thinking. Many levers, bridges, or vehicles I pushed to the appropriate place in no time. Elsewhere I almost despaired.

A ball falling from the ceiling, for example, has to hit a hydraulic bolt with meticulous timing so that the bolt hurls it onto a button. On my run-through on Quest 2, I caught the right moment by chance; on the PC, it didn’t work for ages.

Even the boss fights – if you can call them that – disappoint. Chasing a colorful flashing orb in a narrow tower just frustrates. Since the body change takes on a life of its own here, ascending under constant attacks leads to many crashes and tedious new attempts.

However, there are also some really cool environmental puzzles where I have to carefully examine the surroundings in order to be able to hang a crane appropriately, among other things. Ultimately, a bit more fine-tuning would probably have given the game much more motivating puzzles.

Borderline experience for the stomach

The team should have paid more attention to other facets of the game as well. The most important issue is the lack of comfort. I’m thrown dozens of feet through the air every minute, fall out of a minecart, or jet over a go-kart course with a terribly shaky camera.

VR beginners and players susceptible to motion sickness should think twice before buying. As a somewhat hardened VR veteran, I could only play Bonelab in bits and pieces and with long pauses. 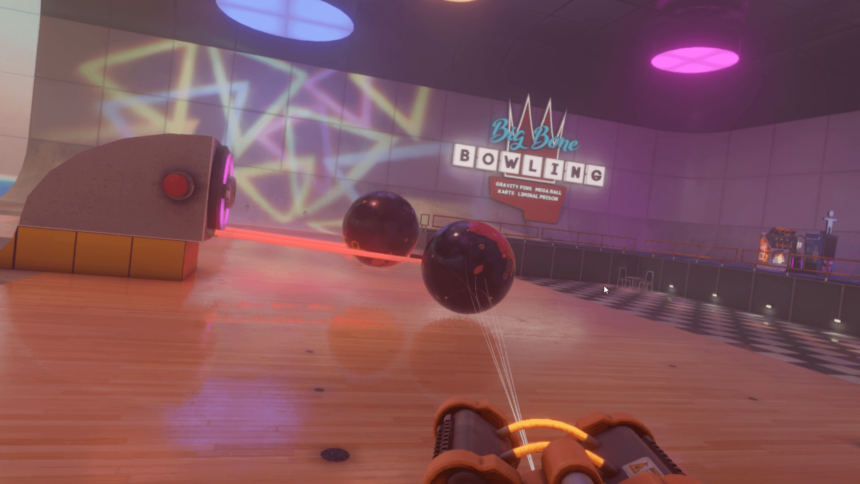 Especially with such demanding movements, it’s a mystery to me why Stress Level Zero offers so few comfort options. There are a handful of options, including jerky turning (snap turn) in different angles or a running direction aligned with the head or the hand.

However, the team does without common aids like a black border at the edge of the screen or movement via teleport. The sitting game is also more complicated than elsewhere. This is neither contemporary for virtual reality, nor does it show professionalism.

More love has gone into the graphic implementation of the digital dream worlds. The richness of detail cannot compete with graphics highlights like Half-Life: Alyx or even upcoming PSVR2 titles like Horizon Call of the Mountain. However, the idiosyncratic art design mix of different themes conveys the feeling of a varied journey.

The revamped physics and interaction engine “Marrow” also gives the game a unique selling point. Compared to Boneworks, I didn’t notice too many changes – apart from the body switching and the fact that I got my hands stuck to the environment a bit less often. With a Rift S, it ran smoothly on high to ultra settings (Intel i7-8700K, GeForce RTX 2080 Ti).

A full-fledged VR shooter for Quest 2?

Quest 2 users will of course have to live with significant graphical drawbacks on mobile hardware. Nevertheless, the Quest 2 implementation does quite well. The full-fledged implementation of the physics engine is remarkable. You can also play around with the authentic weight of the objects and characters on the mobile VR headset to your heart’s content.

Drawbacks include missing shadows, significantly less detailed textures and surfaces, and overall weaker lighting. In return, the experience on the Quest 2 at least remains smooth for the most part, albeit with occasional jerks and crashes. The mobile Bonelab setting cannot keep up with the pretty shiny Quest 2 implementation of Red Matter 2. 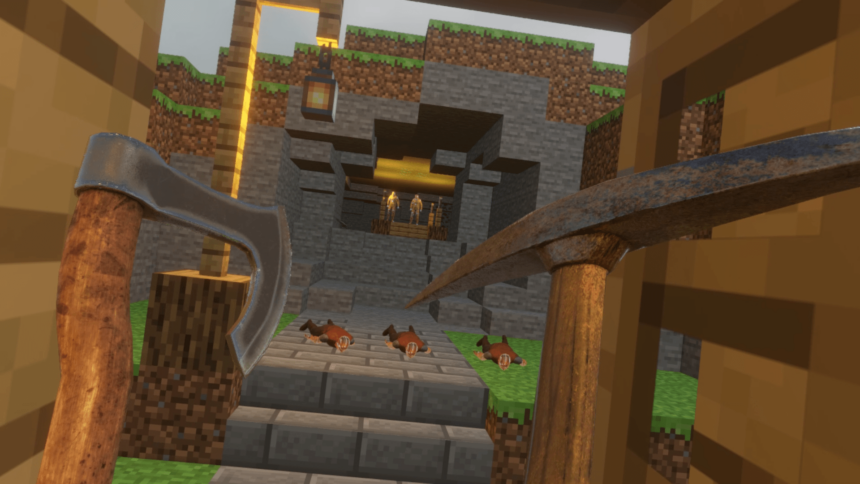 Both versions support community mods based on the Marrow SDK (beta). So far, mainly avatars from well-known games and manga series are online. Simple levels like bowling halls or cart tracks of mustachioed plumbers also already exist, but often without interactive game mechanics.

Strangely, so far only a few mods have been officially released and are directly accessible in the game world. There are already hundreds of creations, but most of them have to be downloaded outside of the game and copied into the appropriate folder.

Apparently, the developers are still being careful not to corrupt game data or saves. Alternatively, there is an option that makes unchecked mods from the Mod.io site directly accessible in the game.

For this, only a web address has to be changed in a text file of the game. A corresponding video tutorial for the repository mod in Bonelab shows you how it works. However: Use at your own risk!

All in all, Bonelab leaves me with a feeling of disappointment. Sure, the physics engine and body switching make for cool moments. However, the latter only comes into play far too late in the story mode. In addition, many things still seem half-baked, whether in the too-easy combat, the somewhat muddled campaign, or the blatant lack of comfort options.

Commendably, even the Quest 2 version supports mods. Hopefully, the user creations will give Bonelab more gameplay depth in the long run.

Bonelab is available for the Quest 2 and PC VR headset. In theQuest Store or Rift Store, you can get the other version for free. This cross-buy offer does not apply in the Steam Store.

You can buy Bonelab here: