Into the Radius VR: Thrilling survival in a bizarre world

Into The Radius combines a supernatural survival shooter with careful maintenance of weapons and equipment.


Nothing is the same in the remote Soviet mining town of Pechorsk. Instead of people, ghost-like creatures wander through a surreal exclusion zone full of uprooted trees and floating structures. Your task playing Into the Radius VR: survive in this chaos.

With its story mode, the game from CM Games is aimed at single players. After the end of the Early Access phase, I went into the VR battle for survival. What makes the game special and maybe even particularly good?

As the apparent last survivor of a mysterious accident, I explore the bizarre zone while keeping an eye on my health. The bubbling space-time anomalies can knock me back severely if I don’t detect their partially glowing pulses in time.

In keeping with the story in 1987, my only contact with the outside world is a rattling computer. At my secure base, I pick up differently prioritized missions from the United Nations Pechorsk Special Committee (UNPSC). If desired, I can tackle several active missions in parallel.

From the money I earn, I buy new rifles and attachments like scopes or silencers to make myself less conspicuous in the wasteland. Sometimes I even have to lure the shadows or ghost sheriffs sprinting out of cover. I later deliver good photos to the UNPSC to advance the exploration.

Mostly, however, it is advisable to sneak along walls to avoid attracting too many enemies. After all, many missions are about tracking down an item, such as a photographic film – and filling up your backpack with vital loot along the way.

Into the Radius: Messages from the Ether

In between, cries for help from the mysterious Katja reach me again and again. She and her fellow sufferers keep providing me with new background stories in the form of short audio messages. The story is not the focus here, but the short stories make me curious for more.

On the Quest 2, Into the Radius VR’s scenery runs smoothly for the most part. However, there are clear drawbacks in terms of detail and lighting. | Image: CM Games

Sometimes the suddenly appearing jet-black figures give me a good scare. The reason is less a jump scare, but more the dense atmosphere in the bizarre world. This is especially true when I go exploring at night.

It’s not only the deadly spiky grass that springs out of the walls that reminds me to be careful. Enemies regularly gather at the edge of buildings to threateningly (and too loudly, the sound mix doesn’t fit here yet) draw attention to themselves. Strangely enough, the creatures almost never enter buildings – maybe they can’t use doors?

But when they do, and one of them surprises me while I’m looting, I drop the flashlight in fright. Later, I get access to useful gadgets like a headlamp.

Manage inventory in the fight for survival

The large backpack inventory is clearly implemented less effectively than in other survival shooters like The Walking Dead: Saints & Sinners (review). In the large main compartment, many objects simply jut wildly into each other in a confusing manner. Targeting and picking up objects with the two triggers of the VR controller is also too imprecise in hectic moments.

This also applies to the impractically placed inventory belt on the body. I can often only reach its contents with very awkward controller movements, especially when I play in a sitting position. During gun battles or when I reach for a knife, such inaccuracies quickly lead to sensitive health loss. 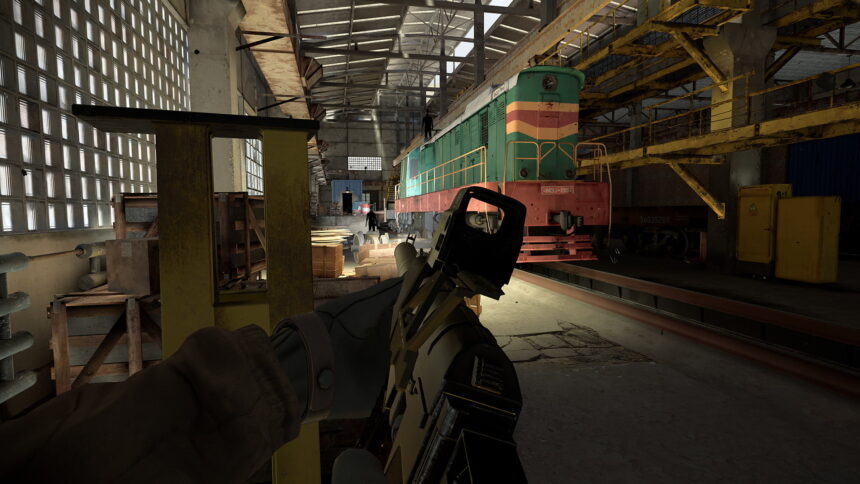 Sometimes important objects slip through holes at the edge of the game world and can’t be reached afterwards. Or the inventory belt is suddenly behind my back. Fortunately, the game can be saved at any time to quickly iron out these mistakes.

If the technology plays along, the weapon handling makes for exciting moments. Only if I fill up all the pistol magazines before my next trip will I be safe from running low. It’s especially fun to use the motion controllers to reload shotgun ammunition or stow it on a holder.

A jammed pistol slide causes nasty surprises if I don’t pull it back in time. To prevent this from happening in the first place, good preparation is already necessary at the base. Here I even have to spray gun parts regularly with oil and clean the barrel with a brush and paper towel. This ensures reliably functioning shooting in the zone. In the persistent world, a lot of care is required when cleaning up anyway.

Into the Radius: A classy VR survival shooter

Finds I bring with me stay exactly where I leave them, including candy bars to stave off hunger and declining stamina. You can even “pick” canned food out of the can with a knife in post-apocalyptic style.

Let go of the fright: I once even felt these fast fringe monsters on my arm. In truth, it was fortunately only my headphone cord slipping out of my shirt. (Here: Quest 2 version) | Image: CM Games

All of this actually creates the feeling between missions that I’m in a fight for survival, for which I have to prepare myself scrupulously. The wondrous world and its twitching creatures also support the atmosphere, even if the technical implementation is only mediocre.

In the PC  version of Into the Radius VR, weapons and some objects offer pretty shiny details up close. Some blurry piles of earth and wood paneling, on the other hand, look a bit dull and stale.

There is visibly less detail on the Quest 2 (review). Especially outdoors, the backdrops here are littered with less authentic-looking debris. However, the good art design and (mostly) clean performance create a coherent overall picture on the Quest 2 as well.

In the end, the survival fight already unfolds a certain addictive effect in its first hours, despite some problems like the sometimes choppy controls. Over 90 percent positive reviews on Steam and almost full five stars in the Quest Store speak for themselves: Into the Radius VR is a really good survival game for virtual reality.