Red Matter 2 is supposed to set graphic standards on the Quest 2. In the test, I also made my way through nicely illuminated stations via SteamVR.

Hardly any VR game presented the isolation of space as atmospherically as Red Matter from 2018. In the sequel, the Spanish developer Vertical Robot wants to refine the concept even more, with intuitive, modern controls and unrivaled pretty backdrops on the Meta Quest 2. At the same time, the game also launched for PC VR on August 18, with even more elaborate lighting and glossy effects.

Set in a fictional cold war, I embark on a quest to find a lost friend and colleague. The adventure full of physics puzzles, jetpack jumps, sneak attacks, and manipulable machines takes me across the solar system with its shady research stations. Along the way, I fight against bizarre hallucinations and intrusive guard robots.

Red Matter 2 in the test – Review in a nutshell

Red Matter 2 offers the most technically impressive backdrops for Quest 2. For long stretches, it’s also a wonderfully immersive VR adventure that draws gameplayers into its mystical space stations. Later in the game, however, bugs and a lack of fine-tuning interfere with the mechanics of fun puzzles, sneaking around, and shootouts.

Red Matter 2 is suitable for you if you

Red Matter 2 is not for you if you

If you want to unravel the mystery from part 1 yourself, you should not read any further. The story picks up directly from the predecessor. Therefore, spoilers are unavoidable. Of course, the plot still revolves around the mysteriously proliferating red matter, which brings all kinds of mysterious and apparently dangerous effects with it.

After the protagonist Sasha Riss’s consciousness is freed from a simulation, he finds himself in the body of a guard at a base of the hostile Atlantic Union.

On the run, his Russian-influenced mutant nation Volgravia provides him with an ally codenamed “Beta.” She gives him further instructions and helps in the search for his injured colleague Stas Volkov: He was apparently still able to send a distress call and has left video snippets on various space stations like a scavenger hunt.

On the way to the terminals, there are of course some dark caves and ventilation shafts. Sometimes I sneak through hidden entrances crouched with the sparkle, elsewhere I hover purposefully with jet power through industrial halls. The revised jetpack doesn’t control as sensitively as in Lone Echo 2, but it fits well with the concept of quiet exploration.

During the roughly eight hours of gameplay, some wonderfully old-fashioned sci-fi machines wait for your input. I push mechanical joints into the right position by myself to redirect light beams. Even when hacking, I carefully move electronic tubes or glowing spatial projections to their destination. Gradually, I reach more explorable space stations to explore on my journey through space.

The most fun I had on the trip was manipulating a wildly whirring contraption in the mines. Its design pleasantly reminded me of the mysterious backroom shorts by Youtuber “Kane Pixels.”

As is so often the case in the game, the studio demonstrates a knack for ingenious puzzle design here. After some experimentation with my tools and the spatial controls, I again had the saving flash of inspiration after a few minutes, which finally caused the mechanical monstrosity to overheat. 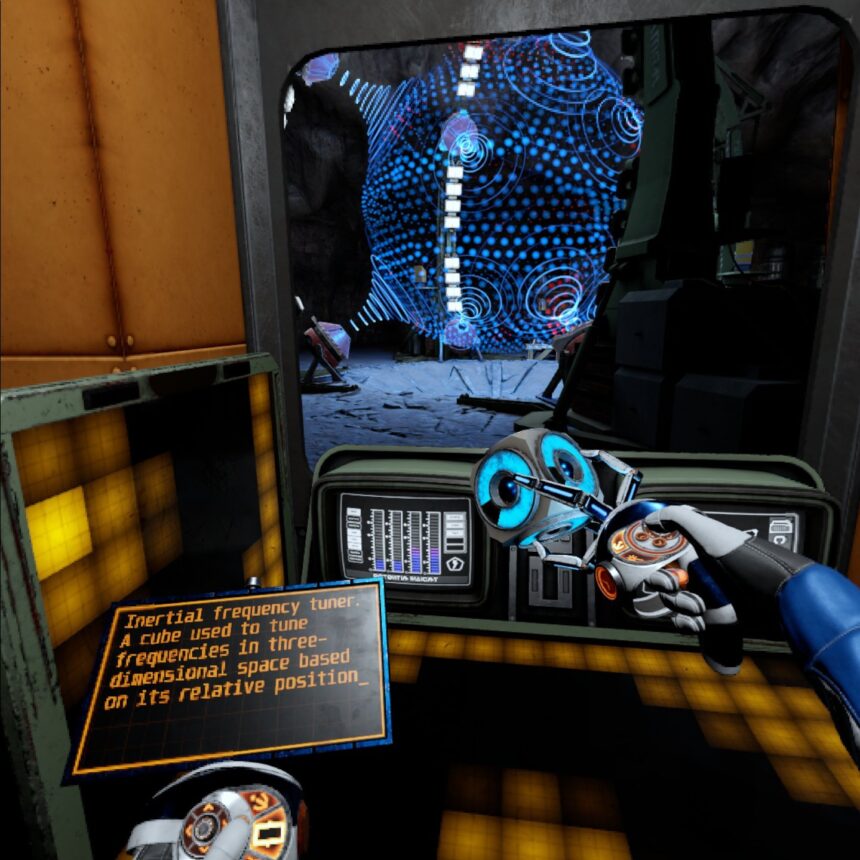 Screenshots and trailers can’t begin to capture how graphically impressive and stylish the puzzling machines already look on the Quest 2.

A nice touch for immersion in all of this are the multi-function tools in my hand, which are modeled after the real Quest 2 controllers (or index controllers). As I grab at their handy tip with mechanical grappling hooks, I feel like an astronaut in a suit.

Functions such as a flashlight, scanner, and pistol also prove useful amidst the environmental puzzles. Sometimes you even have to find numerous components to repair a machine using scattered blueprints.

Similar to the mechanically old-fashioned Myst remake for Virtual Reality, there are no help functions or other modern achievements. So newcomers will inevitably have to muddle through and pay close attention to Beta’s instructions over the radio.

Unlike in the adventure masterpiece Lone Echo 2, there is, unfortunately, no trustworthy companion or philosophically inclined dialogue options. Instead, only some pre-set conversations in cutscenes are offered. Nevertheless, Red Matter 2 also manages to completely capture my attention in a masterful way. 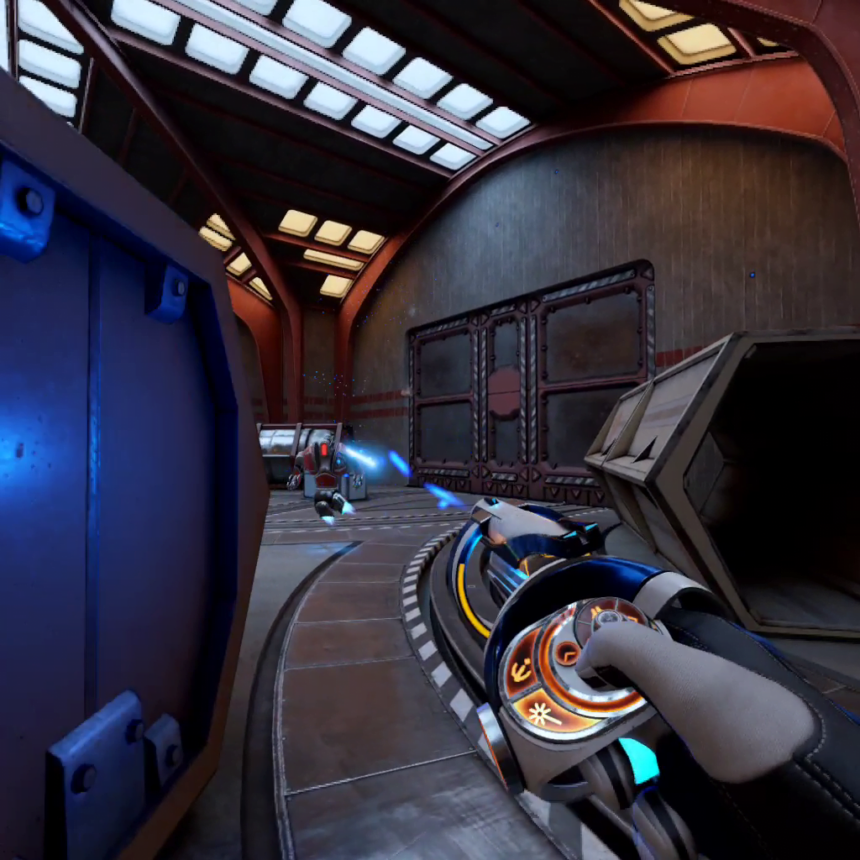 The occasional gunfights against dull metal buckets become more of a chore, especially since the simple weapon handling can’t quite keep up with full-fledged VR shooters. | Image: Vertical Robot

The professionally dubbed conversations in English or Spanish always leave enough room for exciting doubts. Can I really trust the Space Bureau, Beta, and their liberation operation? What do the many inconsistencies surrounding my backstory, wayward scientists, and red matter exploration mean? In Sasha’s surreal visions, the viscous mass partly overgrows the complete scenery.

Due to many twists and possible interpretations, newcomers might feel overwhelmed by the plot at first. However, after reading numerous notes, more and more puzzle pieces of the story surrounding Sasha and his old colleagues Stas and Irina start to come together. Through it all runs the theme of remorse in the midst of unscrupulous experimentation.

The design of the planetary stations is a feast for fans of old sci-fi movies full of flashing mainframes and brutalist concrete buildings. Those who, like me, like to explore ruins and abandoned sites in real life will have a blast. Between massive research equipment and huge blood banks with robotic arms, I can’t help but leisurely stroll through the scenery and soak up every last detail.

Red Matter 2 makes it impressively clear how well old analog technology fits the encapsulating immersion of VR. There’s no overkill of messages, waymarkers, or quest logs here. Fans of modern open-world games might feel irritated. I, however, love this focus on the essentials! A grumpy AI even prints out its complaints about my intrusion on the dot matrix printer again. Exceedingly charming.

Again and again, the thought came to my mind whether our today’s world with its overstimulation could be only an intermediate station. Who knows – maybe in the future “spatial computing” will again serve us more spatial objects floating in front of our AR headset in the room.

The most beautiful VR game for Meta Quest 2?

The unrivaled graphical realization on the Quest 2 also looks like a glimpse into the future. At times, I can hardly believe what the heavily modified Unreal Engine tickles out of the XR2 chip. 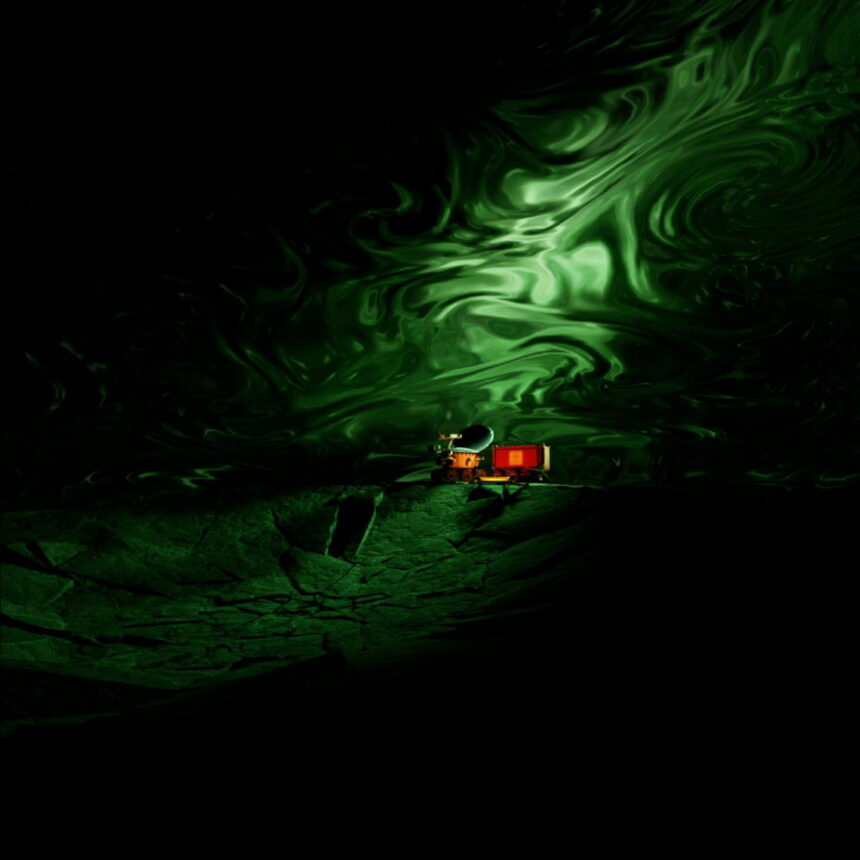 Some backdrops could easily be exhibited in a museum. Even the other-worldly glowing Adventure Form from Charm Games doesn’t offer so many cool panoramas. | Image: Vertical Robot

From glowing particles to laser beams, light refracts and reflects in the environment in multiple ways. Particularly impressive are the tarnished glass panes, on which even the finest scratches and smudges affect the result.

Even ray tracing is used, for example for reflections on monitors or laser beams like from the scanning tool. Here it is a real pleasure to examine even the smallest, nicely shimmering detail or to translate volgravic writing with the scanner.

I’m not allowed to move freely through the world in the mostly straightforward sections. However, some branchings (and some backtracking) have been suitably integrated into the level design. Meanwhile, the sensitively interspersed orchestral soundtrack underlies the atmosphere.

Shortcomings in the fine-tuning

In the course of the VR game, the fun of exploring is unfortunately clearly slowed down by some bugs and puzzles with poor fine-tuning. Sometimes a metal rod or an important fuse gets stuck in the shaft, elsewhere I sink into the wall with a black screen – or a faulty hacking mini-game cannot be completed.

In one hall, even a trolley starts floating in the air when I launch an unintended solution idea (a patch is already in the works). Fortunately, the automatic save points are not too far apart. 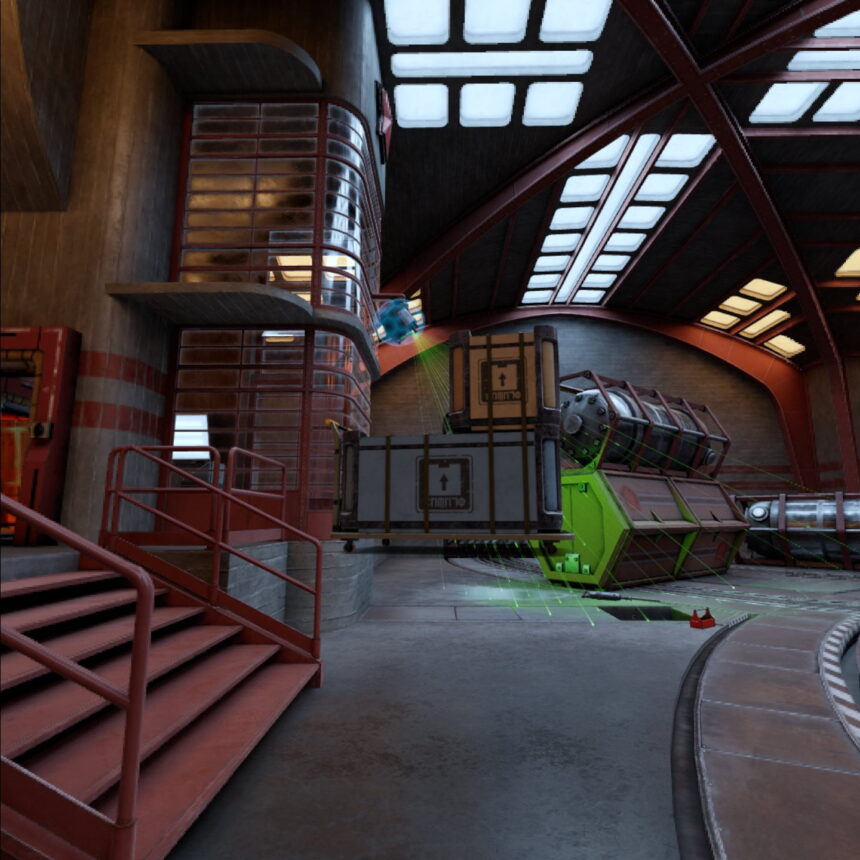 Instead of alternative solutions, there are later bugs like this hovering trolley on Quest 2. Similar to the vehicle, the patch unfortunately couldn’t be rolled out before launch. | Image: Vertical Robot

The jetpack jump sequences and sporadic gunfights against guard robots also don’t seem as polished later on. They hardly put the hero under pressure with their weak AI, while they hop unmotivated between predictable positions – even on the higher of the two difficulty levels.

Perhaps the team simply lacked time for fine-tuning the later sections. More effort has gone into the comfort options. They include all the usual mechanisms for a stomach-friendly VR game, either standing or sitting. This includes smooth and jerky turning in different angles, different vignette thicknesses, and movement according to head or hand direction.

Even the slow hover bounces I tolerate very well as a moderately sensitive VR gamer. Overall, the more stick-based handling feels much more modern than in the predecessor. If you want, you can also use teleportation again.

Also impressive on the PC

Red Matter 2 is primarily meant to show what can be tickled out of the Quest 2’s mobile chip. However, the SteamVR implementation offers significantly more details and effects. This includes higher resolution textures and dynamic and indirect shadows.

With a Valve Index (review), a GeForce RTX 2080 Ti, and a lot of supersampling, the smooth result is even more impressive. Meta’s Space competitor Lone Echo 2, which was developed purely for the PC, still looks much more impressive on PC VR headsets. 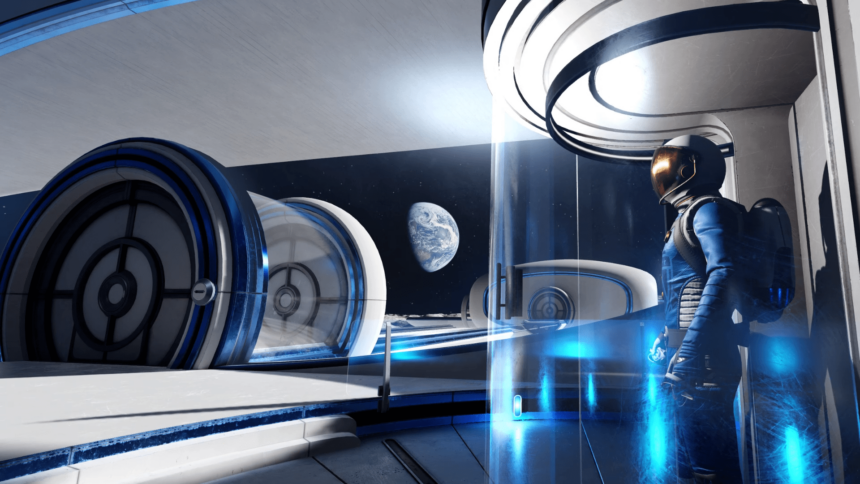 On the PC, some additional details and effects like reflections enable such artistic snapshots. | Image: Vertical Robot