What a relief, finally no more heavy backpack PC. The VR Arcade Zero Latency streams graphics wirelessly from VR PCs to the VR headsets on the field, using the WiFi 6E standard. I checked out the newly-opened location in Hanover for this article, but the company operates 62 arcades across 25 countries, including 15 in the United States.

The contemporary technology made the multiplayer experience almost as elegant and straightforward as with mobile standalone headsets like the Quest 2 (review), albeit in more elaborate shooter settings from the gaming PC. Eight computers, each with a GeForce RTX 2070 on the edge, route their signal to multiple wall-mounted access points (Cisco Meraki).

In between, up to eight participants run across the field with a VR headset, headphones, and plastic guns to shoot down AI enemies – or their friends, depending on the game. In the cooperative Far Cry VR: Drive Into Insanity, for example, the signal arrives pleasantly clean and with low latency on the provided Vive Focus 3 while I mow down the pirate hordes with gun controllers.

The name “Zero Latency” is not entirely true. But, I have to move the gun controller in my hands at lightning speed to feel a minimal delay. In the action, I don’t notice any more of it anyway, because the gameplay is noticeably more direct than with the Wifi-6 streaming of Quest 2 or Pico 4.

Only one player reported a few short dropouts. I didn’t notice any. In the game, up to eight participants struggle side-by-side in a macabre manhunt. The villain, Far Cry 3‘s Vaas Montenegro, sends his warriors after us just for fun. We cooperatively fight our way across the island and through dimly lit caves.

The scenery cannot keep up with the splendor of a conventional Far Cry game in an open world. Nevertheless, the dense vegetation, exploding barrels, and detailed wildlife create an overall atmospheric picture. As so often in virtual reality, trailers or screenshots cannot adequately depict the true experience.

While we squeeze into a gondola back-to-back, the wide view over the island is particularly convincing, which would not be possible in this form on a standalone headset. The cooperation with the experienced VR studio Ndreams (Fracked, Phantom: Covert Ops) might have helped here. The intensive fixed foveated rendering only makes the image look a bit too blurry at the edges.

Convivial co-op action in the jungle

Five players fit well in the size of the playing field. It measures around 360 square feet (ca. 33 m²), plus a buffer zone at the edge. Before we get too close, a beep warns us of physical contact. The space can get a bit crowded with eight people, according to operator Tom Wojtera. 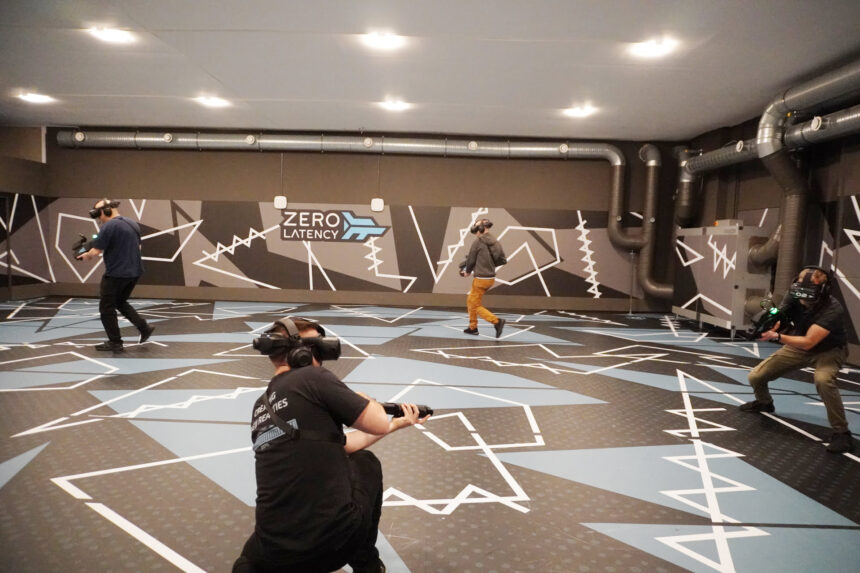 The room measures around 360 square feet. Around the perimeter, there are numerous WiFi access points and jagged patterns so that the Vive Focus 3’s inside-out tracking recognizes its surroundings. | Image: Jan Wöbbeking

So, amateur snipers should feel free to drop back a few steps to catch enemies from a distance with the bow. Occasionally, our two groups split up, for example in caves and at ancient temples.

Those who are familiar with Far Cry 3 can already imagine that things get supernatural at times. This is mainly the case after Vaas delivers one of his delusional monologues. I won’t reveal more, for spoiler reasons. However, these scenes are among the coolest moments of the game.

Although the shooter-like combat is simple, it kept me entertained. In addition to cooperation, there is also a motivating competitive aspect. See who got the most kills or headshots and who died the least number of times courtesy of a scoreboard both on-site and online.

PvP matches in the VR arcade

These online statistics are also available for the competitive VR shooter, Sol Raiders, also be played with up to eight VR athletes. The space stations, reminiscent of Halo, remain graphically simple. But, I like them even better than the Far Cry experience.

In twisting science fiction settings, players destroy a target or guide a ball into the goal with an energy beam in order to score. Meanwhile, the opposing team takes them under fire or jets in on a gondola. There are even virtual ramps for height differences. These steps over the actually straight ground feel richly strange, but add variety to ranged shooting.

Some Zero Latency locations already set up a league operation to Sol Raiders (sometimes still with backpack PCs). In 2023, the Europe-wide Champions League of city winners is to follow. 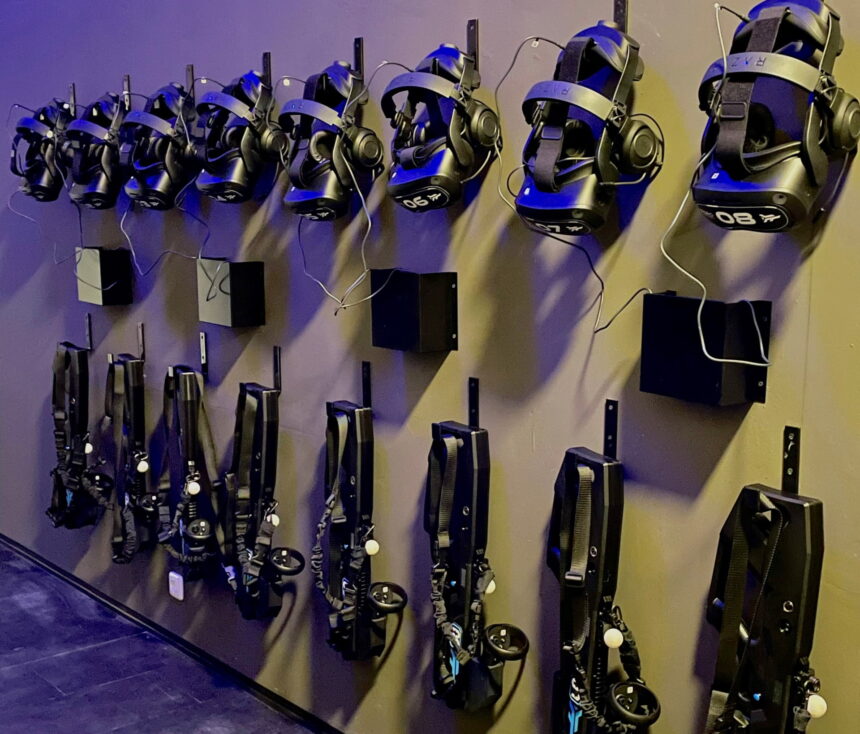 The VR equipment appears to be considerably streamlined, with eight VR headsets and weapon controllers ready to play. In between, the headset batteries are changed at the headband. | Image: Jan Wöbbeking

Even with fully booked times, by the way, a spontaneous demand in the arcade can be worthwhile. Sometimes the organizers fill up groups with additional players.

In addition to martial zombie carnage like Outbreak Origins or Undead Arena, there are also less violent experiences on offer. The ancient gravity puzzle game Engineerium leads into a surreal alien world and plays with the expectations of the participants. A new Warhammer game is also planned for 2023.

In summary, the Zero Latency excursion got me much more involved than other VR arcade experiences I’ve had. Unfortunately, I can’t yet judge how it stacks up against modern competition from Sandbox VR or Hologate. However, I would have preferred to stay longer on site to take in another round.