Google is taking the next step and bringing the Youtube Globe into your living room. Literally.


While Google has buried one VR project after another in recent years, Youtube VR is still being nurtured. For good reason: the VR app brings the platform’s best features to virtual reality, with an intuitive interface that supports voice recognition and hand tracking. Anyone who has tried Youtube VR for themselves will appreciate the polish of the VR app.

On Twitter, Youtube VR’s UX head Mike Alger teased a new feature that takes advantage of two new augmented reality interfaces from Meta Quest (2) at once, taking the app to the next level.

First, the next update for YouTube VR adds the ability to switch to the VR glasses’ pass-through mode, allowing you to see your surroundings while watching videos. This AR mode is already used by a number of VR games like Unplugged, Blaston, and Cubism.

Second, you can permanently hang the virtual YouTube screen on a physical wall of your choice, just like a TV. The app remembers the size and position of the screen so that it appears in exactly the same place the next time you put on the VR glasses. Alger showcases the new features in a Twitter video, which I’ve copied in for you above.

Fading in the physical environment in VR is made possible by an interface called Passthrough API. Developers can implement the AR mode in their store apps since November 2021.

The permanent anchoring of digital objects in physical space is enabled by so-called Spatial Anchors. The feature first appeared in December 2021 as an experiment, which means that developers are already allowed to try out the interface, but cannot yet implement it in their Store apps. That will only be the case with general availability. The release should happen soon. Youtube VR could then be the first VR app to use the interface.

The video is older and was first shown at the Connect 2021 meta conference without anyone taking notice. In the video, Alger says that it is a “working prototype” of the VR app. According to the video, the interface was implemented months ago, suggesting that Google gained early access to it. It’s quite possible that the company is just waiting for Spatial Anchors to become generally available. 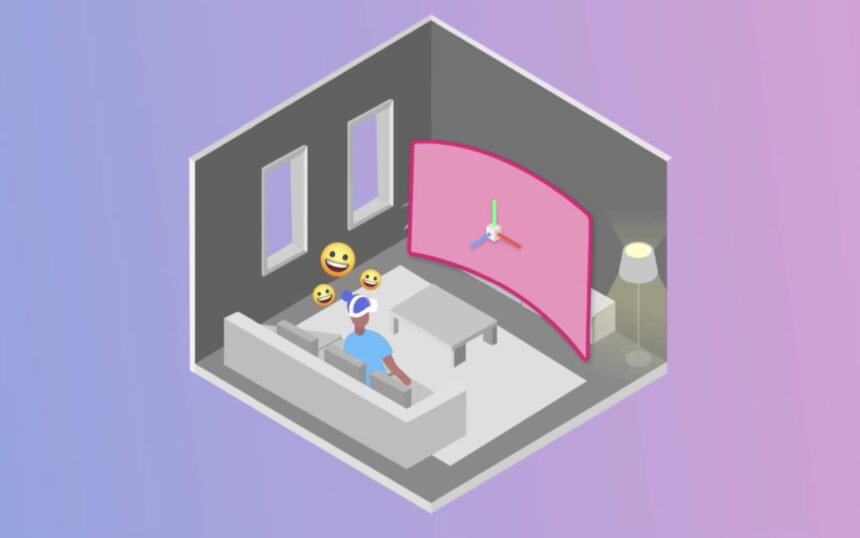 On Twitter, Alger writes that the Passthrough API does not share information about the physical environment with developers, probably for privacy reasons. For this reason, users must first draw in the walls before they can hang the YouTube screen on the wall. However, this is easy to do, as the video shows.

Yeah, the passthrough API doesn’t pass any mesh, surfaces, or video to the app currently. If it did, there would be no wall-setting step and environmental effects would be more doable. But it would likely need a privacy permission.

A taste of the AR future

The AR mode of the Meta Quest (2) is not optimal, as the integrated cameras are primarily designed for tracking and not for capturing the environment as realistically as possible. The result is a grainy black-and-white image of the physical environment. This will change with Meta’s next VR headset, Cambria.

Google is working on a similar device, Project Iris, which is scheduled for release in 2024. That alone justifies the further development of YouTube VR in the direction of augmented reality. It is quite possible that Google will use Meta’s VR glasses as an experimentation and learning environment for later AR applications.

AR visionaries speculate that AR glasses could make physical screens superfluous in the long term. According to Meta-CEO Mark Zuckerberg, in the future, all media could become an app that projects an image onto the wall or three-dimensionally into the room. The new Youtube VR gives a taste of this future.