Virtual reality and augmented reality in healthcare could soon grow into a $10 billion market, according to a report.


According to a market research report, a niche market with huge potential is just forming in healthcare. Virtual reality and augmented reality are increasingly being used in medical settings. In about five years, the market for VR and AR in healthcare is expected to be worth close to ten billion US dollars.

VR and AR have huge potential in healthcare

The report, published on Research and Markets, draws on historical market years 2017 to 2020 for forecasts. The base year is 2021, with the remainder of 2022 estimated based on past performance. The forecast period is 2023 to 2027. 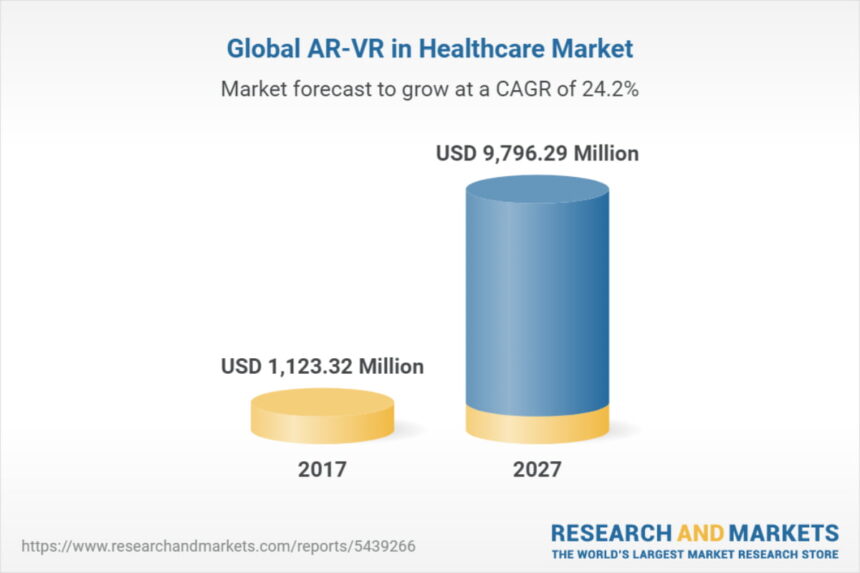 VR and AR have huge potential in healthcare, according to market researchers. | Image: Research and Markets

In 2017, the global AR-VR market in healthcare had a total value of nearly $1.12 billion. By 2021, the value grew to about $2.7 billion and is expected to increase three and a half times in the upcoming years. By the end of 2027, researchers expect the total value to reach $9.796 billion.

Reasons for AR and VR market growth in medicine

The research report attributes the market growth to the increasing technological advancements in the healthcare industry and industrial expansion in recent years. AR and VR are two of the fastest developing technologies that can be integrated into healthcare systems without much effort and improve patient care, it adds.

Already, immersive technologies are increasingly being used in the education and training of physicians and surgeons, according to the study. For example, students in VR training can gain vivid experience in treating diseases without exposing themselves to the risk of infection, it said.

AR and VR are already being used in medicine today

There are many current examples of AR and VR applications in medical settings. For example, a Swiss clinic is training staff in virtual reality and making dangerous hospital germs visible in VR. In the UK, many hospitals are using VR as an anesthetic, reducing side effects and costs.

Start-up Osso VR recently received a million-dollar investment for a VR training app for surgeons. Surgeons can use the app to examine CT scans of bones as 3D models in VR headsets and plan interventions.

Microsoft also wants to establish its AR headset HoloLens 2 as a medical tool. In 2020, the Balgerist University Hospital in Switzerland performed the first operation with AR headsets and successfully operated on a patient’s spine.