The QooCam EGO brings back the classic 3D format. The stereoscopic images and videos are compatible with Meta Quest 2.

Most VR cameras aimed at consumers are designed for 360-degree monoscopic or 180-degree stereoscopic viewing.

The QooCam EGO offers something no other camera can: It captures stereoscopic images and videos in the classic rectangular format. In doing so, it picks up on a technology invented nearly 200 years ago and has survived into the 21st century in the form of the View-Master.

The QooCam EGO brings this tradition into the digital present. Thanks to inexpensive VR headsets like the Meta Quest 2, stereoscopic images and videos can be viewed in a large format.

QooCam EGO: Camera and viewer in one

The camera has two horizontally arranged lenses that are 65 millimeters apart, which is the average distance of the human eye.

A special feature of the QooCam EGO is the included viewer. The attachment can be clipped onto the camera module via a magnetic mount and allows instant viewing of images and videos in 3D.

This also works during shooting and filming. The viewer thus becomes a 3D viewfinder that lets you judge the framing and depth effect of a shot even before you pull the trigger. For this innovative combination, the product from Chinese VR camera manufacturer Kandao won an iF Design Award.

The camera’s touchscreen and the viewer attachment’s lenses are matched to display images and videos with a relatively high pixel density of 37 PPD.

The QooCam EGO is compact and lightweight: the camera module weighs 160 grams and the viewer just under 115 grams. The battery capacity is 1,340 mAh and corresponds to one hour of recording time. The battery can be replaced in an emergency. Additional batteries cost about $25.

With a companion app, which is currently only available for iOS, the 3D images and videos can be edited directly on the smartphone and shared on social networks like YouTube, which natively supports the camera’s 3D format. 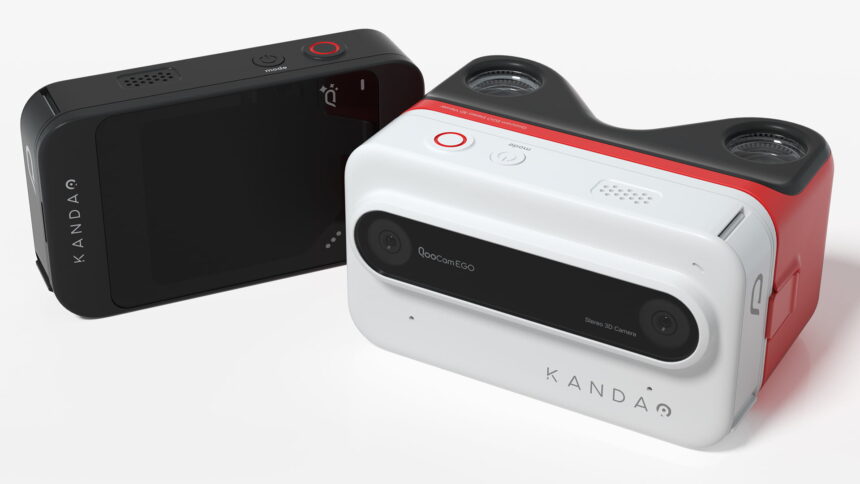 With YouTube VR, you can then watch the 3D videos with Meta Quest 2. The VR image viewer immerGallery (review) is recommended for viewing the 3D images. The app automatically recognizes the 3D photos. However, you have to transfer them to the VR headset first, which requires some effort.

First tests of the 3D camera can be found on the DIY Photography website and on the YouTube channel of VR vlogger Hugh Hou. You can watch his video on YouTube VR and get an impression of the image and video quality.

The QooCam EGO is available for about $400.