ImmerGallery is an image viewer for Meta Quest 1 and 2 that lets you view VR and 2D images in virtual reality more easily.

I tested immerGallery for the first time in April 2022. A lot has happened since then: Existing functions have been improved and expanded, and new features have been added. Time to take another look at the photo app.

immerGallery: Review in a nutshell

ImmerGallery fills a gap in the market. If you love photography and want to view 2D and VR images in virtual reality, you can’t get around this VR app. However, importing images is still a bit inconvenient and the platform aspect is expandable.

immerGallery is useful for me if…

immerGallery is less useful for me if… 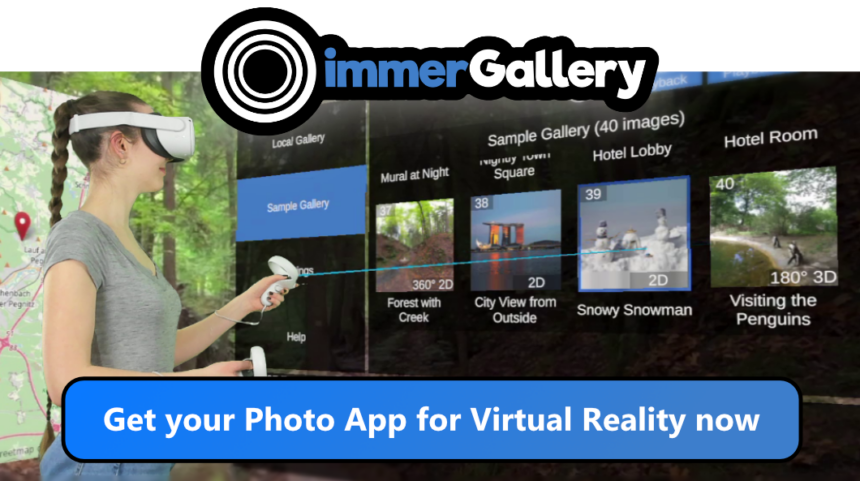 ImmerGallery is a VR app for Meta Quest 1 & 2 that specializes in recognizing and displaying images of any kind.

It is intended that immerGallery will become a platform where users can share and download self-hosted images. However, the VR app is still far from being Instagram for VR. To date, the platform features are pretty basic at this point.

The VR app is not intended for displaying videos. There are already special VR apps for this in the Meta Store.

There is a free demo of immerGallery if you want to try out the basic functions or experience great examples of 3D and VR photography before you buy.

Which features is immerGallery offering?

Below you will find the most important features including version 1.1, which was released on September 12, 2022.

Photography fascinates me. I’ve been collecting and archiving digital photos from a variety of sources, including VR cameras, for more than 20 years.

It’s not just immersive images that benefit from Virtual Reality; even 2D photos can have a new impact when viewed in the monumental large format that VR makes possible. As a result, you can sometimes see details that you wouldn’t have noticed before.

ImmerGallery fills a gap in the market as a VR-specific image viewer. And it now works excellently: While the VR app did not recognize all photo formats by far in my first test in April, these concerns have meanwhile been resolved. In the latest test, immerGallery no longer had any problems recognizing and correctly displaying my randomly selected images.

One exception are the 180-degree photos of my Insta360 EVO, which are presented suboptimally. I have to export the pictures from the proprietary INSP format to the JPG format with Insta360 Studio first. Thereafter, the presentation works fine.

If you are uncertain whether immerGallery recognizes all your photos and is worth buying, you can download the demo of the VR app. The free demo version recognizes and displays the first ten images in the Pictures folder.

The biggest issue I encountered with immerGallery in spring was the inconvenient transfer of pictures to Meta Quest 2. The import is still not solved optimally, but there are now several options, including streaming via UPnP.

These options are sufficient for hobby photographers and technically savvy casual users, but they are still too complicated for a broad audience.

It would be cool, for example, if you could stream photos from your smartphone directly into the VR headset and display them in large format in immerGallery. Meta’s discontinued VR app Oculus Gallery offered this feature a few years ago. The question is whether Meta, Google or Apple even offer the appropriate interface for such a function.

I see the greatest future potential in immerGallery as a platform. The gallery download is to evolve into a feed, developer and immerVR founder Daniel Pohl tells me. The idea is that you can subscribe to and download content from other users and share your own content, which would make immerGallery a platform for immersive images. Then the VR app would become interesting because of its user-generated content, too, and not just as a personal image viewer.

I also like the idea of immersive stories: Several connected VR images together with a soundtrack could become a new storytelling medium. However, this would require a more engaging app than the current web tool. How about a smartphone app?

I hope that as VR headset adoption increases, cheaper and better VR cameras will hit the market in the coming years. Currently, very little is happening, especially in the consumer segment, unfortunately.

If that changes, Virtual Reality will need VR apps like immerGallery to view and share immersive images.

You can get immerGallery here: