Survival games are popular. The tricks from Survivorman VR should even help you in the real wilderness.

The prequel of Survivorman VR: Into the Descent sounds like the initial situation of a typical survival game. After a plane crash, players find themselves in a remote, snowy mountain world where they struggle to survive and, ideally, are later rescued.

Instead of hard work, base building and rather useless crafting mechanics, the focus here is on techniques that should help in the real wilderness. Behind the Survivorman brand is the Canadian TV series of the same name with a similar theme.

Survival sim instead of VR game

“I’ve spent decades challenging myself and showing people what it is like to survive in the most extreme situations,” said Survivorman creator and star Les Stroud in an official release. “I’ve worked closely with Cream to ensure Survivorman VR is as authentic as possible, so that when you head into these challenges, you’ll go through everything I do any time I step into the great outdoors.”

The fundamental question of the series, he says, is always whether “stranded people” survive in the wilderness, even after they’ve lost everything.

Stroud’s survival experiences from a good 35 years have been incorporated into the virtual reality game in many ways, he says. As a setting, developer studio Cream Productions has chosen a scenario that doesn’t seem so far-fetched in sparsely populated Canada. After the crash, the game ends with just the wreckage and a lot of snow.

Enemies or weapons do not play a role, values such as body temperature, hunger, or exhaustion do. A compass from the machine helps with orientation.

A knife helps to cut or unscrew useful pieces of wreckage, which are stowed on the belt or in the backpack. The blade is also used for sparks at an improvised fireplace.

Survival for Quest 2 and PC-VR

This is how you escape death by frostbite and Les Stroud’s mocking comments. As far as his appearance is concerned, the studio allows itself a little creative freedom in the simulation: The survival expert appears to the players again and again in visions to give valuable tips.

To represent him in the game as authentically as possible, Cream uses the specially developed “Dynamic Digital Humans” (DDH) system. The avatar of the Canadian TV star is created together with the “SIRT” research center at Sheridan College. It is also researching avatar animation for other games and films. 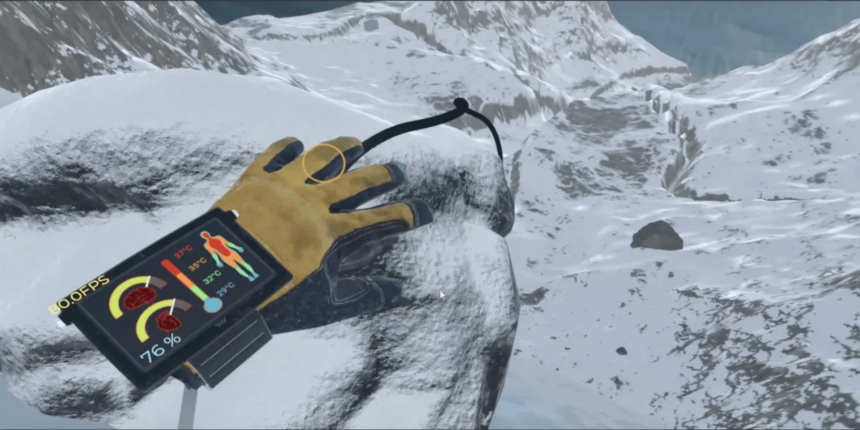 If the game is successful, further survival scenarios are possible. Whether these could be updates, paid DLC chapters or further series parts for VR headsets is open. However, it seems possible that VR survival games like Into the Radius VR, Green Hell, or Song in the Smoke will have more authentic competition in the future.

Survivorman VR receives financial support from the Canada Media Fund, the Canadian province of Ontario, and Meta. In addition to the original optimized for Quest 2, a version for PC VR is also in the works. Price and release date are not yet known.