The free Half-Life: Alyx mod “Levitation” continues the story of the best VR game. Is it worth your time? (Spoiler: Yes, it is)

“Levitation” is one of the most elaborate modifications for Half-Life: Alyx, alongside “Bioshock: Return to Rapture”. While the playtime is only three to four hours – the trip to Rapture takes over a dozen hours – it still offers an entirely new story campaign with Alyx in City-17.

Responsible for the mod are project manager and level designer Shawn Snelling aka “FMPONE” and Corey Laddo. Snelling is known in the community for his high-quality Counter-Strike maps. Laddo is a filmmaker and 3D animator responsible for the animations.

Levitation sends you back to City-17

The story picks up directly from the events of Half-Life: Alyx: The G-Man sends me on a journey, his intentions unclear as always.

Next, I meet Alyx’s friend Russel in a strange dream world: he is searching for two missing rebels. There’s a secret Combine research project that the two rebels were investigating before they disappeared. Over the next few hours, I shoot and puzzle my way to Sector X to maybe help these poor guys.

The Levitation mod is dubbed throughout and even uses its own voice actor for Russel instead of just playing sound snippets from Valve. The narration is rather slow but offers a surprise at the end. While it can’t match the narrative qualities of the original, it does provide an appropriate background for the real star of the mod: the environments.

Levitation’s strength lies in its environments, which is perfect for VR

The path to Sector X is varied and leads through a total of eight different levels. From the street, it goes over rooftops into the sewers and a subway or through Combine facilities – each level is extensive and has its own twist.

Many scenes are fantastic to look at, including the construction site with the gigantic bucket-wheel excavator known from the trailer. This yellow behemoth looks much more impressive in VR than on the 2D monitor, since you can admire it in its original size. 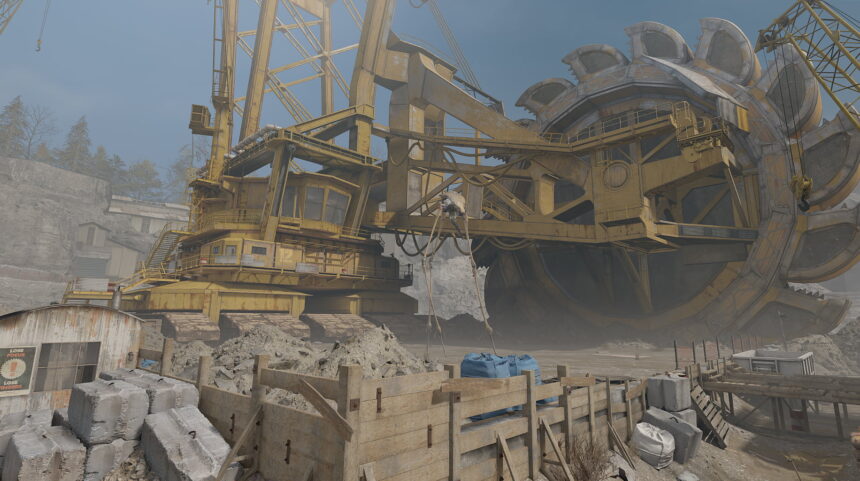 When you roam through abandoned apartments or dig through infested subway shafts, the typical Half-Life feeling comes up. The maps are full of details, and it’s worth discovering them: you’ll be rewarded with resin, the game currency that will let you improve your weapons.

Here, however, a difference between Valve’s original and the unofficial sequel becomes apparent: The environments are impressive, but the puzzles or combat passages in them feel forced. They are not as seamlessly integrated into the gameplay as we are used to from the original. There are also a few bugs, but the team is gradually fixing them.

All of this is criticism on a high level: I had a lot of fun returning to City-17, wandering through fantastic environments and enjoying the proven and VR-optimized gameplay. The team even managed to include some boss fights in their mod.

If you want to experience more Half-Life, you should definitely download Levitation. Half-Life: Alyx Levitation is available for free in the Steam Workshop. The mod is divided into five parts. When you’re done with Levitation, I recommend you return to Half-Life 2 in VR.