Apparently, Samsung is indeed planning to re-enter XR. The timing and device type are open – the company has several options.


At the end of February, the Korean IT portal ETNews reported, citing supplier circles, that Samsung is said to have a prototype of AR glasses ready and is discussing a market launch. The optical system in the glasses is said to originate from Samsung’s own research lab and has been in development for a long time. The display partner is Digilens, and Samsung relies on its own Exynos technology for the chip and uses Android as the operating system.

Looking forward to a Metaverse device

Samsung CEO Han Jong-hee now indirectly confirms the existence of a Metaverse device at the Mobile World Congress 2022, even though he does not use the term himself.

“Please look forward to the launch [of the metaverse device], since we are working hard,” Han says when asked. Officially, Samsung did not unveil any XR hardware at MWC 2022, and Han would not reveal any details. He said it was important to bring the product quality to the “highest standard” first.

The Metaverse device could be the AR glasses described at the beginning, the result of a cooperation with Microsoft on Hololens 3, or an entirely different device based on early prototypes (see below).

Samsung Glasses Lite: Will the vision of the future become reality?

About a year ago, concept videos of Samsung’s AR vision appeared under the project name “Next Wearable Computing”: slim data glasses that can be used for digital displays in particular and replace a notebook in combination with a keyboard that is also projected.

Regardless of the form factor and function of the glasses, Samsung’s re-entry would be good news for the XR industry. Samsung was one of the drivers of the technology at the beginning of the VR hype phase in partnership with Oculus (Gear VR, Gear 360) and Microsoft (Windows Mixed Reality), but then withdrew from the market due to poor sales and usage figures.

It is also known that Samsung worked on standalone XR glasses similar to Oculus Quest for a long time. The devices were demonstrated at backroom events around 2018, but have not been brought to market so far. 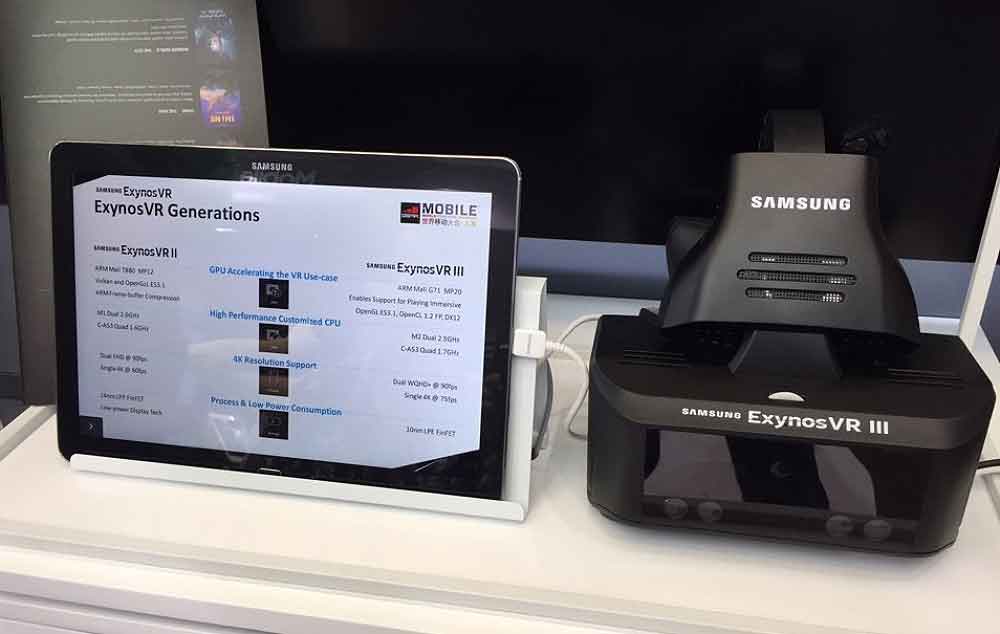 From a purely technical perspective, Samsung’s XR prototype Exynos VR III already promised similar features in 2018 as we expect this year with Meta’s Cambria and Apple’s XR glasses. The glasses offered AR mode and eye-tracking, among other features. | Image: Samsung

Samsung last promised new XR products in 2019 and also applied for various XR patents, but there have been no concrete announcements since the VR withdrawal with Gear VR.

With Meta entering the market with Project Cambria and Apple with AR VR glasses later this year, Samsung may have resumed plans from back then and further developed the device.