PSVR 2 eye tracking could be sheer horror in horror games

The PSVR 2’s eye tracking brings more emotion and body language to virtual reality – one example of this is the blink tracking.

A playful blink, a conspiratorial wink: such emotions could play an important role in VR games in the future. In a presentation at the Game Developer Conference 2022 (GDC), engine developer Unity revealed a number of technical details about Sony’s upcoming VR headset Playstation VR 2.

The PSVR 2 will support eye-tracking, that is common knowledge. One of the lesser-known capabilities of this technology is that it also tracks the eyelid. There are many applications here: for example, during a romance in an adventure game, it could record whether players wink at their counterpart.

According to Dave Rudell, Manager of XR Input & Interactions at Unity, the associated program code is not yet complete. However, creative experiments in virtual reality are already possible with the current version.

Blink tracking with the Playstation VR 2

In addition to eye direction and eyeball rotation, the Playstation VR 2’s eye-tracking also captures “blink state,” Rudell explains. Blinking could make interpersonal interactions in virtual reality more natural and provide feedback on mood. In addition to the frequency of eyelid closure, pupil diameter is also monitored. Both are indicators of the player’s tension.

VR horror games could take advantage of this feature, for example. If the software detects an increase in nervousness, it could have a particularly ghastly monster leap out of the darkness at the moment of the greatest tension.

Or the monster waits with the attack until the victim opens his eyes again. There are hardly any limits to the wealth of ideas here, as long as the developers don’t hold back themselves – for health reasons, for example.

Rudell enthuses that eye-tracking could set new standards for the entire VR industry with PSVR 2: Developers would no longer have to wrap their heads around whether it’s even worth investing time and energy in gameplay features for optional eye-tracking, since the feature is built-in by default.

Players, in turn, can look forward to new gameplay features that enhance their sense of presence and power in the virtual world.

Rudell urged PSVR 2 developers to take advantage of eye-tracking. The greatest potential is for users to take away lasting memories through a stronger physical presence, according to Unity’s VR interface expert.

Other opportunities for eye-tracking technology include operating novel in-game tools controlled by gaze direction. Tricky puzzles can be better analyzed by evaluating the objects viewed by test players, Rudell said. Sony was already on the lookout for new eye-tracking ideas that could benefit PSVR 2 as part of Global Game Jam 2022. 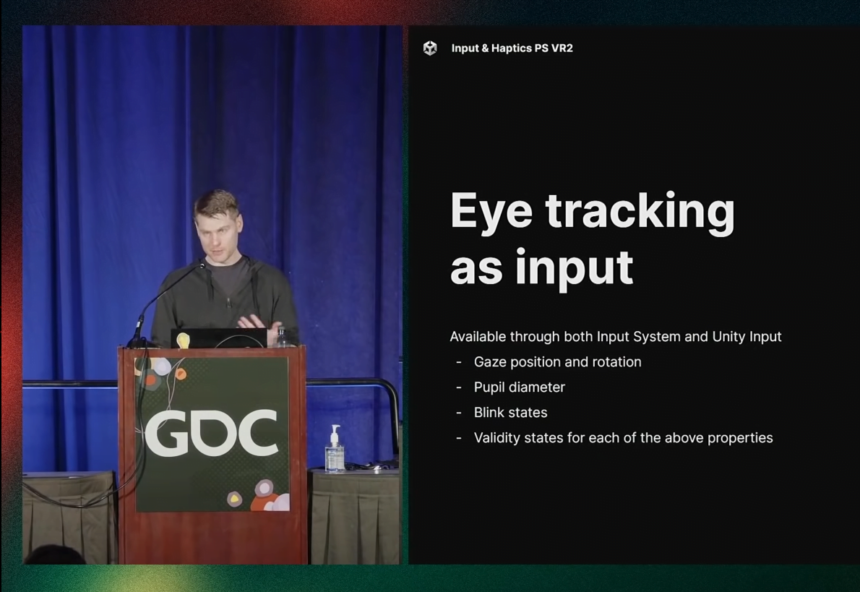 Eye-tracking can also have positive effects on performance: The so-called Dynamic Foveated Rendering renders only the image section in focus with all graphic details for each eye. This reduces the required graphics performance and frees up resources for the image in the focus area. Developers can thus render more beautiful graphics or significantly increase the frames per second.

However, the cooperation with the eye-tracking company Tobii only since February gave cause for concern that Sony might not have been satisfied with the results so far. This could be a reason for a possible delay in the market launch of the VR headset. The release date of the Playstation VR 2 is still open.