Nreal Air display glasses launch in the U.S. for $379

Nreal Air is now available in the US and also runs with iPhones via adapter, but with limitations.


The U.S. is the third country where Nreal Air is available after Japan and the UK. The wearable is available on Amazon for $379.

Nreal Air follows the more expensive Nreal Light (review), which has been available since May 2021. While the latter was mainly accepted by enthusiasts and developers, Nreal Air should inspire more consumers again.

Compared to Nreal Light, the new wearable is technically slimmed down. It offers a 46-degree Field-of-View, instead of 52. And, it detects head turns, but not spatial movements (3DoF instead of 6DoF). On the other hand, it is 25 grams lighter, consumes 50 percent less energy, and is considerably cheaper than the $600 Nreal Light.

Nreal Air is more of a display glasses for media and mobile gaming than an AR headset, not least because of its 3DoF tracking. It connects to a smartphone via cable and projects content into a field of view equivalent to a 130-inch screen nine feet away.

With the U.S. launch, Nreal is also announcing a redesign of its AR operating system, Nebula, with a new user interface, widget feature, and improved browser. There are also new games and applications. “Mirror Mode” lets users stream 2D games from their smartphone, Steam Deck, Nintendo Switch, Xbox, or Playstation to a virtual screen.

The most significant news is that Nreal Air is compatible with iPhones. However, this requires a separate HDMI Lightning dongle for $59, which is quite clunky to boot. 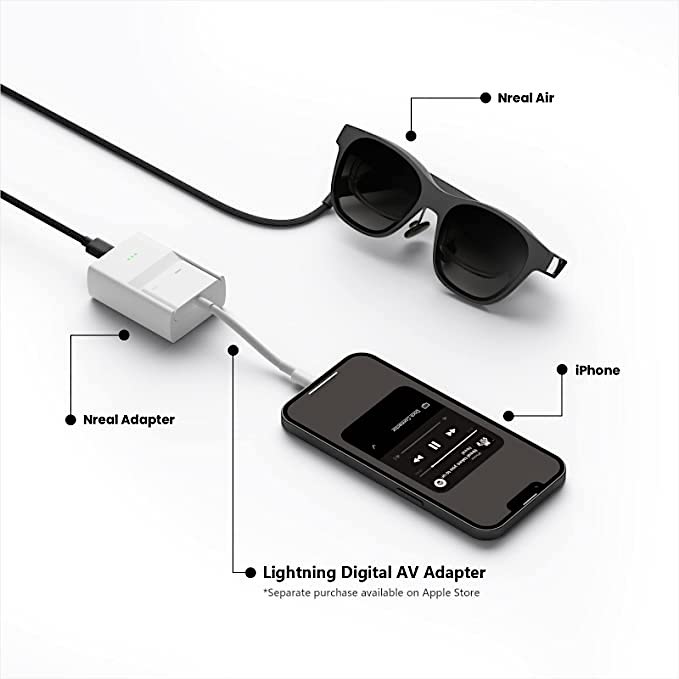 An Nreal Air, an iPhone and the adapter block needed for compatibility. | Image: Nreal

iPhone compatibility comes with feature sacrifices, as Nebula only runs on Android devices. Nreal Air only supports screen mirroring at the beginning. Netflix and the like can still be watched in large format, but only in HD resolution. Like Nreal Light, Nreal Air offers two displays with 1,920 x 1,080 pixels per eye.

Nreal is also introducing a Mac version of Nebula for Macbook Pro and Macbook Air, which use Apple’s own ARM chips. After connecting the display headset, a virtual user interface is said to appear and project multiple digital screens into the room.