Coinciding with the unveiling of its new Snapdragon AR2 augmented reality chip, Qualcomm also revealed an AR headset in development through collaboration with Niantic (Pokémon Go). At the presentation, the partners showed a reference model of the augmented reality headset tailored for outdoor use.

The “Outdoor AR headset” will serve as the basis for future AR headsets from other manufacturers. OEM partners include Lenovo, LG, Nreal, OPPO, Pico, Sharp, Tencent, Vuzix, and Xiaomi. The headband is elastic, folds up, and allows movement of the battery to the back of the head for good weight balance.

AR headset from Qualcomm and Niantic

Software also benefits from the collaboration. Starting in 2023, Niantic’s “Lightship VPS” (Visual Positioning System) will be compatible with the Snapdragon Spaces developer platform. Apps created with Qualcomm’s AR development platform can then be easily expanded with VPS functionality. 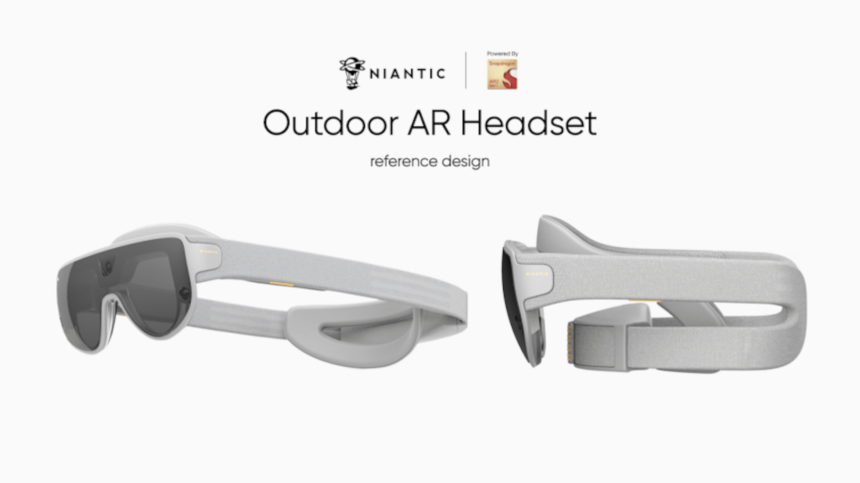 The VPS system, rolled out for AR studios at the end of May, precisely and persistently places gamers on a collaboratively shared 3D map. On this map, they see the same computer graphics in the real world, such as interactive artworks, monsters, or signposts, with centimeter precision.

With this cooperation, Niantic and Qualcomm want to accelerate the development of AR headsets that can be used outdoors. The model on display has transparent displays like the Microsoft Hololens 2 or the Nreal Light.

So far, this design has not proven to be suitable for everyday use, as the technology suffers from space problems and narrow fields of view. More advanced is the video passthrough AR with a VR headset.

With this technology, similar to the function in headsets like Metas Quest Pro (info) or the Lynx R1, computer graphics enhance a video image of the physical world streamed into the headset. However, if the lighting conditions are too bright or too dark, the inside-out tracking can fail – and you’re blind if the headset shuts off. Therefore, (and for fashion reasons), video AR headsets are not suitable for outdoor use so far.

AR games accurate to the centimeter in the real world

A trailer shows Niantics and Qualcomm’s AR headset in practice. In it, some test subjects walk together in a city center. The participants follow virtual path markings on real footpaths, open information boards at landmarks, and see game characters running across the real asphalt or up walls.

In an action game, they control meter-high combat robots that sprint across meadows or fire missiles at each other on rooftops. In the video, the players use a motion controller with a touchpad for the thumb. The Snapdragon AR chip also supports hand tracking not shown in the video.

An important basis for the AR experience in the real world is Niantic’s VPS mapping of real-world locations. Through the tool, the community of developers and gamers collaborates on Niantic’s digital globe. In addition to spatial scans, photographs contribute to 3D reconstruction. The project began in 2020 with the ability to scan the environment in Pokémon GO. There are now 30,000 locations with VPS support, mainly in major cities.

iOS and Android devices still play a significant role in the use of AR content, despite the future potential of AR glasses.

“We believe true AR will be best experienced on AR headsets made for the outdoors. For our part, we plan to make Lightship VPS available to power location-based AR experiences on as many hardware devices as possible,” explains Niantic’s AR business head Maryam Sabour.

The AR headset is an early reference design. Its construction is still subject to change, Sabour said.

There are already plenty of software ideas for headsets. Niantic recently presented a trailer with AR apps that can also be played on smartphones. These include sprouting flower meadows in Tower Superbloom AR and the monster-fighting MMO ARealm.

In September, Niantic announced Lightship VPS for Web, which makes content linked to real-world locations available in the mobile browser.