MicroLED: Why the promising display technology is so difficult to manufacture

MicroLED is being touted as the display of the future, including and especially for augmented reality. But there are still some hurdles to overcome.

MicroLEDs are considered to be the jack of all trades among display technologies: In terms of pixel density, brightness, contrast efficiency, response time, space requirements and service life, they outshine the competition. Classic LC displays and even the more advanced OLED microdisplays (also called micro-OLED) cannot keep up.

So it’s no surprise that they are so popular with tech companies:

There are also high investments in MicroLED companies: Vuereal secured $14.4 million in April and now Israeli startup InZiv is following suit with $10 million in Series A funding.

MicroLED: Not yet ready for the mass market

Brightness and energy efficiency: These qualities are crucial for AR glasses. The digital overlays and holograms must be easily visible outdoors and under the sun, and since there is not much room for large batteries in AR glasses, the displays must be particularly power-efficient. MicroLED meets these requirements better than other displays. 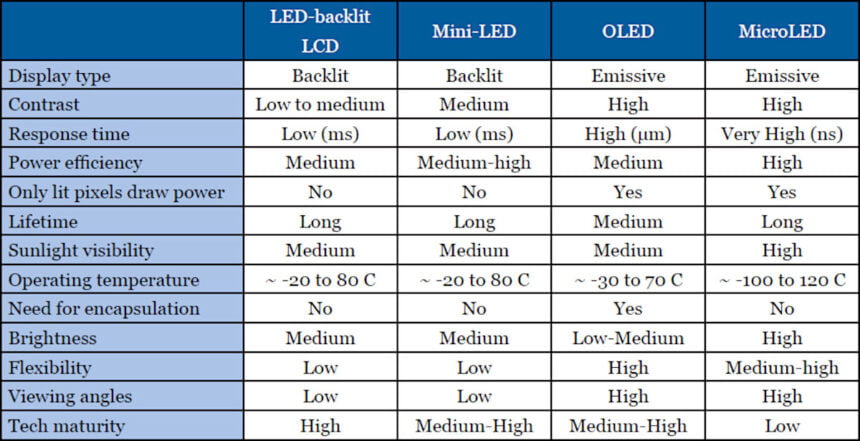 A tabular overview of the technical properties of various display types. | Image: MicroLED-Info.com

The problem is that they are complex and expensive to manufacture. The production of a MicroLED display costs several times that of an OLED microdisplay and even those are still relatively expensive. Experts expect that it will still be years before MicroLEDs are mass produced for consumers, while Micro-OLEDs are expected to find their way gradually into VR headsets from 2023.

Founded in 2018, startup InZiv specializes in inspecting and repairing high-resolution displays, including MicroLEDs. It makes nano-optical equipment to make it easier for manufacturers to find defects in displays. This allows them to improve the manufacturing process and yield, which in turn accelerates development toward market readiness.

MicroLEDs can achieve extremely high resolutions on an area the size of a fingernail. The size of individual pixels is sometimes one micrometer or less. By comparison, a human hair is about 50 micrometers thick. The tiny size of the pixels not only complicates manufacturing, it also makes it difficult to inspect MicroLED displays for defects.

According to InZiv CEO David Lewis, yields average less than 50 percent. This means that more than half of all displays produced have defects – which consequently drives up production costs.

“When you start getting below 10 microns, and you’re looking for optical defects, it gets very, very challenging to use standard optical microscopes,” Lewis said. “They’re not designed for detecting all of these color light elements, which is important for the measurements which are important for the actual design of these displays.”