Meta releases a major update for Quest 2 and Quest Pro

Meta is releasing a major update for Meta Quest 2 and Meta Quest Pro. An overview of the new features.

Firmware Update 47 has been rolling out to Meta Quest 2 and Meta Quest Pro owners since November 28, 2022. As usual, it may take up to a week or more for the update to reach all users. Even if you have already installed the update, it is possible that some features and improvements will not be enabled for your headset until a later date. So you may need some patience.

You can check the currently installed firmware version of your Meta Quest 2 under Settings > System > Software Update.

If an update is ready for installation, the option will appear in the same window. Manual installation is usually not necessary, as the system installs the updates automatically after they have been rolled out to the device.

Let’s move on to the new content, features, and improvements of Update 47.

The Meta Quest mobile app for Android and iOS has received a long-overdue facelift. Your friend list is now front and center, so you can see when your friends are online and what they are doing. It’s now easier to contact them in VR and start a game session together. 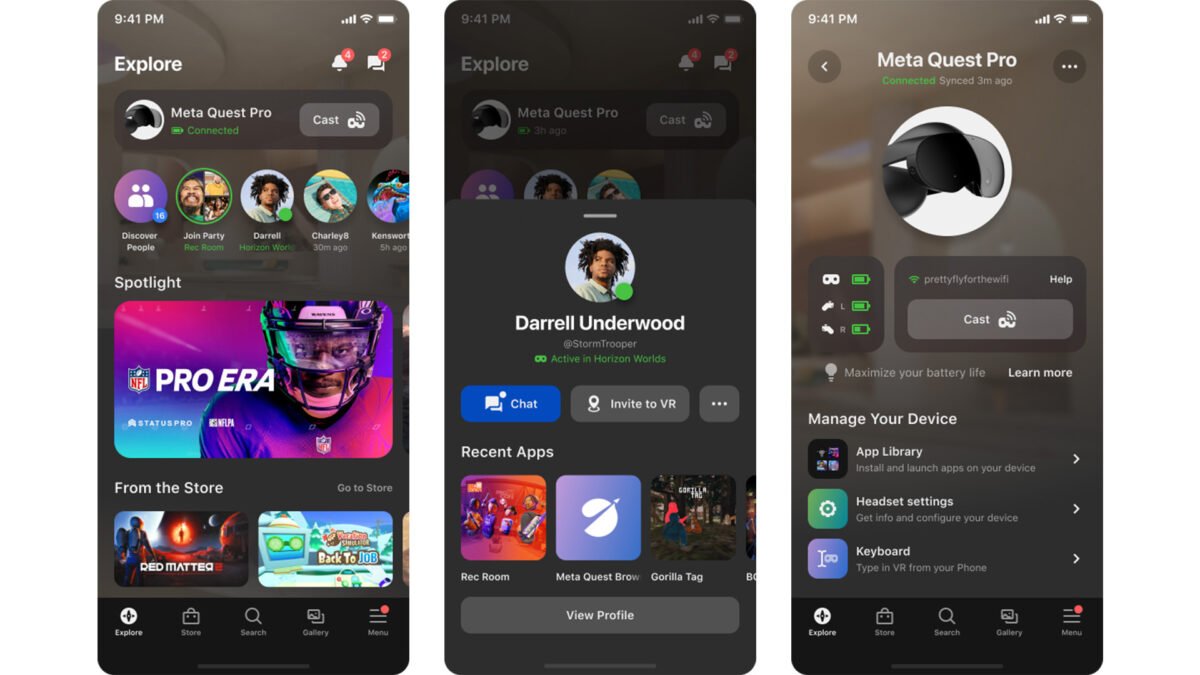 Device management has also been revamped to more easily show when you need to charge the headset and controllers. Casting to secondary screens, launching VR apps remotely, and device settings are also now more accessible.

You can now view and edit your avatar directly in your Quest Home: four environments (Desert Terrace, Space Station, Winter Lodge, and the Quest Pro-exclusive Cascadia) now feature a mirror that makes customizing your avatar more immersive. Your avatar’s arms and hands are now displayed in Horizon Home.

You can now move around your quest home even when the universal menu is open. Press the analog stick forward to see several potential hotspots. Aim at one of the hotspots and release the analog stick to teleport to that point.

Add your favorite apps to the universal menu

You can now drag and pin your favorite apps from the app library to the universal menu. This way you won’t have to search for your favorites, and you’ll be in the game faster.

To use this feature, select the three dots on the VR app of your choice. Thereafter, you should see the corresponding option (if already rolled out to your headset).

Shortcuts for photo and video recording

You can now take photos or record videos with a simple key combination.

Captured photos and videos are now automatically synced with the Meta-Quest mobile app, i.e., transferred to the smartphone app for easier viewing, editing, and sharing.

If you don’t want this, you can turn off the feature.

You can now make your app wish list public and send it to your friends or family members so they can give you app gifts. You can customize the wishlist in the Store tab or with the Meta Quest mobile app.

Update 47 also introduces compatibility of the new Touch Pro controllers with Meta Quest 2. The input devices are included with Meta Quest Pro, but will go on sale in December as separate accessories.

You can read more about what makes them special in our Quest Touch Pro controllers info article.

The following features and improvements only affect Meta Quest Pro.

This experimental feature allows you to listen to music or podcasts in the background while working or playing with Meta Quest Pro. The audio source must come from the Meta Quest browser or a 2D app.

With this feature, you can now capture pass-through view photos and videos by default. Previously, the physical environment was only recorded as a black background.

You can read the full release notes for Update 47 in the Meta Guide app or online in the Meta Quest Release Notes. Set the English language version at the bottom of the page to access the text.