Meta Quest 3 is supposed to get a brand-new SoC. The GPU alone is said to compute up to three times faster than the last chip generation.

The Snapdragon XR2 Gen 1 was announced at the end of 2019 and has not been refreshed since. Since it is a derivative of the Snapdragon 865 smartphone SoC that was optimized for XR applications, the chip is now obsolete. The Snapdragon was used in premium smartphones in 2020.

There have been rumors for quite some time that a new generation of the XR2 is waiting in the wings: the Snapdragon XR 2 Gen 2, which will be used in Meta Quest 3 according to VR analyst Brad Lynch.

Lynch gathered the first clues about the chip, which is being developed under the codename Project Halliday, in September. In a new Youtube video, Lynch gathers new rumors about the XR 2 Gen 2. His sources come from the XR industry.

Qualcomm’s new chip naming (Gen 1 / Gen 2) causes a lot of confusion. The listing above (including model names) should clarify that the XR2 Gen2 is a wholly new chip. | Picture: SadlyitsBradley

Lynch reports that the new chip will once again be the XR derivative of a smartphone SoC, namely the still unannounced Snapdragon 8 Gen 2, a high-end chip that is supposed to fire premium smartphones of 2023.

Qualcomm is expected to announce the new SoC as well as its XR derivative at the Snapdragon Summit, which will take place from November 15 to 17, 2022. The Snapdragon XR 2 Gen 1 was unveiled in the same way.

Lynch lists the specifications of the Snapdragon 8 Gen 2 in his video and refers to other leakers from Android circles, namely Twitter user UniverseIce. According to Lynch, the most important upgrades compared to the Snapdragon 865 from 2019 are the following: 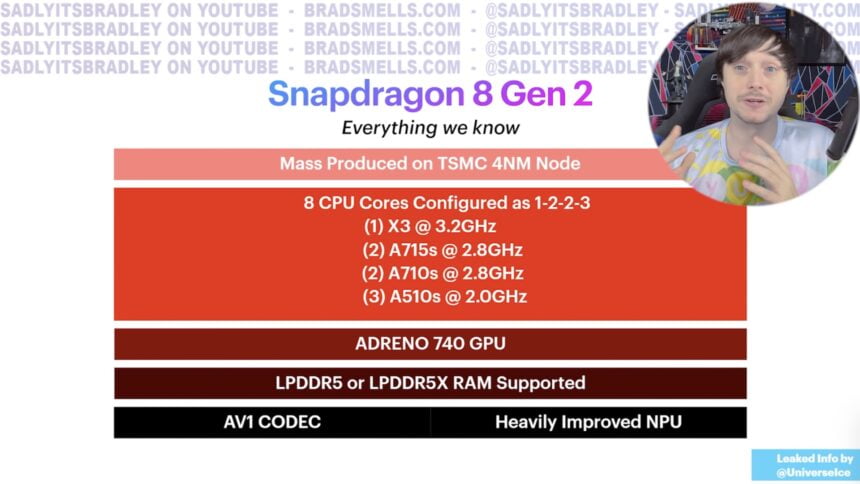 If the Snapdragon XR2 Gen 2 does indeed have these technical features, PC VR fans would also have reason to rejoice.

According to the Virtual Desktop developer Guy Godin, a faster SoC could allow for higher resolutions as well as rendering tricks like SSW for wireless PC VR streaming (Guide). Support for the AV1 codec could come with better image quality, according to Lynch.

The new SoC is also expected to support Wi-Fi-7, which doubles the bandwidth of Wi-Fi-6E. However, Lynch does not expect headsets with a corresponding Wi-Fi-7 chip before the end of 2024.