Meta ends chat feature for Oculus Rift, which could be a good sign for Quest

Meta is discontinuing chat support for Oculus Rift. This could mean something good for Meta Quest 2.

Those who use an Oculus Rift or Oculus Rift S will soon no longer be able to chat with Oculus friends. Not even via the PC app.

This is according to an email received by Reddit user Damontoo and posted on the Oculus Reddit. As of October 5, it will only be possible to chat with other VR users via Meta Quest 1 and 2 and the Meta Quest app. 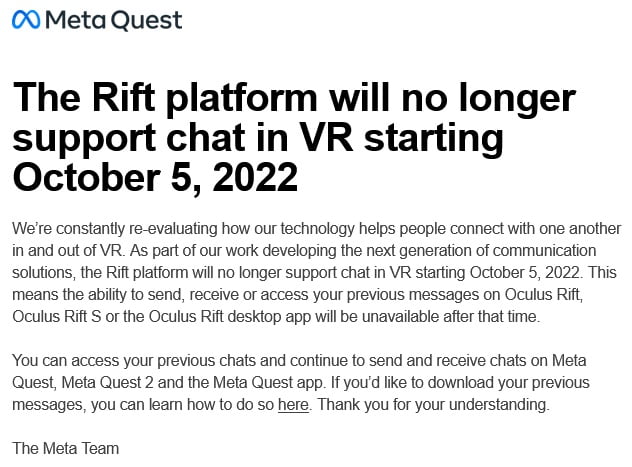 Meta getting rid of the old chat system comes as no surprise. Oculus Rift S was taken off the market in 2021, burying the Rift line of pure PC-VR devices. The future, at least for Meta, belongs to standalone headsets.

Meta and PC-VR: One step back, two steps forward

There might be more behind the removal of the Rift chat feature. Today, anyone connecting to a PC via Quest Link will be confronted with the outdated Rift interface – a pretty poor solution. Meta’s PC-VR app is outdated and will likely be reworked from the ground up eventually to better integrate with the Quest software.

In September 2020, Meta announced a native PC-VR interface. The Oculus blog described a unified system experience that would allow users to view Quest and Rift apps side-by-side and take advantage of exclusive Quest features like Messenger chat and hand tracking while using PC-VR. The integration was announced for 2021. Unfortunately, nothing more has been heard in this direction since then.

The fact that chat support on the Oculus Rift (S) is being disabled could be an indication that the native PC VR software will soon be scrapped. The PC VR app in its current form will hopefully be replaced by a more streamlined solution.

Meta has a good reason to return to PC VR soon. The premium Quest Pro headset (info), which is set to launch in October, will likely be more optimized for PC VR use than Meta Quest 2 due to its applications for work and productivity. According to reports, the new headset will offer near-lossless and latency-free data transfer when using cables. That would be a clear commitment to PC-VR.

Another positive sign is the rumors of an Air-Link dongle, which could make PC-VR streaming (tutorial) easier to set up and thus bring more people into Meta’s PC-VR ecosystem.

With this accessory and a native PC-VR interface, Meta would have overcome the biggest hurdles to PC-VR use of its Quest headsets.