Project Cambria will be a better PC VR headset than Meta Quest 2, according to several leaks and code findings.

Meta Quest 2 is primarily a gaming console. With Project Cambria, Meta is aiming for more: The high-end headset should be more versatile and one day be suitable as a work device.

In the context of productivity and work, it is obvious that Meta is also working on improved PC VR support. Both Oculus Link and Air Link could get an upgrade, leaks and firmware findings promise.

According to import logs, unlike Meta Quest 2, Cambria could support Wi-Fi 6E for higher throughput and lower latency with Air Link in an appropriate network setup.

However, Oculus Link could also get an upgrade. Leaked Cambria blueprints show that the headset could come with a bracket for routing an Oculus Link cable (see below in orange) – which could suggest a stronger focus on PC VR than previously thought. 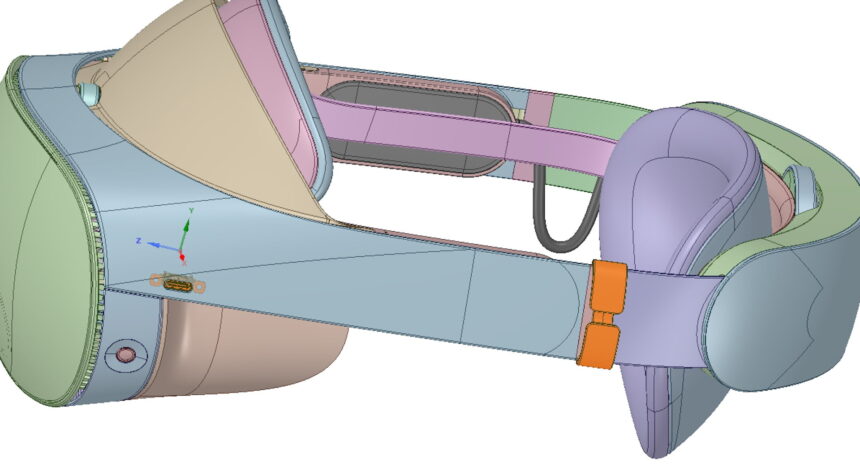 The blueprint shows the head mount with a USB-C port and clamp. | Image: Brad Lynch / Meta

The datamining network around Samulia and friends has also found lines of code in the latest Quest firmware that point to an upcoming DSC support.

This means that Cambria could get a wired connection to the PC without sacrificing latency and image quality, making it a full-fledged PC VR headset – as long as certain conditions are met.

DSC (Display Stream Compression) is a VESA standard that guarantees virtually loss- and latency-free compression of video data even at very high resolutions. The HTC Vive Pro 2 with its 2,448 pixels per eye supports DSC. A similar solution could also benefit Cambria.

Quest Firmware v41 is starting to pop out of the woodwork. One notable thing for PC VR users:

DisplayPort’s DSC compression is showing support in the code. Between this and the link cable clip from the CAD images, it’s safe to assume DP Alt mode for USB-C on Cambria pic.twitter.com/qrFHDJ41ga

Lynch assumes that the headset will support the “DP Alt Mode” based on this firmware finding. This refers to a special USB-C port that can transmit video data as if a Displayport port was present.

Both Oculus Link and Air Link compress and convert the video signal into a format that allows transmission via USB-C cable. With DP Alt Mode and DSC support, this is no longer necessary.

So, with the right cable, Cambria could keep up with PC-only VR headsets or hybrid devices like the Pico Neo 3 Link – and meet even the highest demands of PC VR purists.