The metaverse is on the rise. But what can we actually expect? Companies and experts explain how they envision the merging of the digital and real worlds.

At Facebook’s and then Meta’s XR conference Connect 2021, Mark Zuckerberg revealed his vision of the metaverse. It is, he said, the next evolution of social connectivity. His company wants to bring the metaverse to life and is going all-in – including a name change: Facebook is now called Meta and is to transform itself into a “social technology” company.

Immersive technologies such as augmented reality and virtual reality will play a major role. But what actually is the metaverse? Since no one really knows yet, we have collected a number of possible definitions and ideas for you.

The “Xverse” is becoming an amazing outgrowth of the internet

Rony Abovitz is the founder was CEO of one of Silicon Valley’s once most hyped XR companies, Magic Leap. He envisions the metaverse, or as he calls it, “Xverse,” as a “wild, organic, and amazing outgrowth of what we think of today as the internet.” 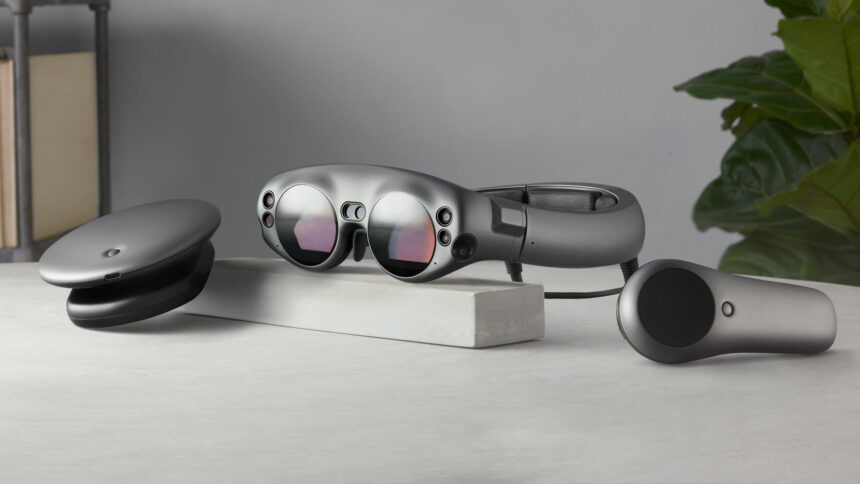 Abovitz believes no company will or should control the metaverse, but many will try. According to him, there will be old parts that would resemble today’s web. At the same time, however, the metaverse will have new nodes and capabilities that are very close to the Oasis from Ready Player One, for example.

There will also be gradations of sentience and autonomy in the Xverse: “We will have the emergence of synthetic life and a multitude of amazing worlds to explore. Building a world will become something everyone can do (like building a webpage or a blog) and people will be able to share richer parts of their external and inner lives at incredibly high-speed across the planet.”

Augmented reality will become a normal part of daily life

Yat Siu is co-founder and executive chairman of gaming and blockchain company Animoca Brands. He sees augmented reality as a kind of gateway between the virtual and real worlds in the future. Reality, he says, will move along a spectrum that ranges from physical to virtual reality.

“A significant chunk of our time will be spent somewhere between those extremes, in some form of augmented reality (AR). Augmented reality will be a normal part of daily life,” Siu believes. According to him, however, these facets of reality will not compete, but rather reinforce each other. 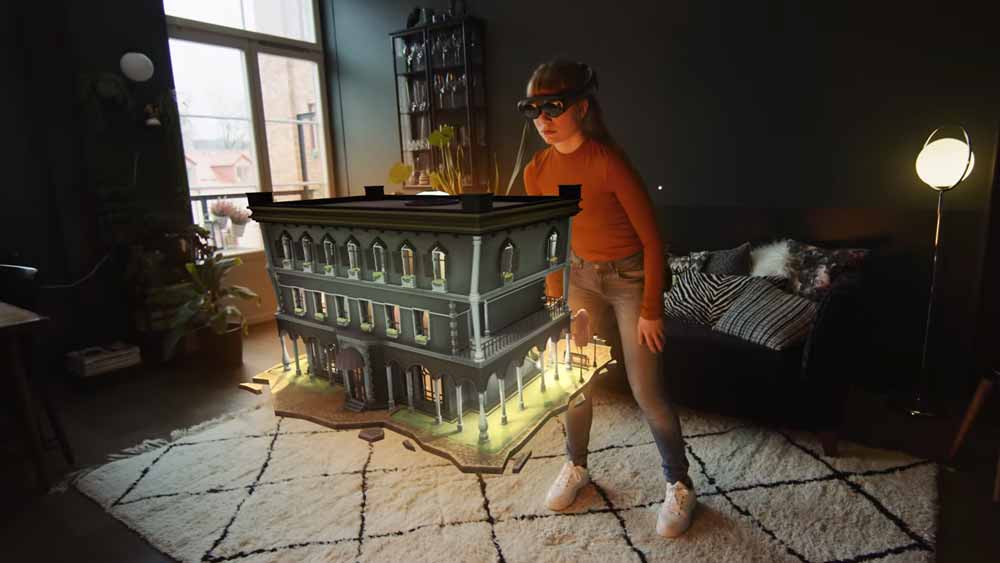 Augmented reality integrates the digital world into reality based on location and objects. | Image: Magic Leap

“These new technologies will require fundamental shifts in thinking. For example, today we see AR as a link to a virtual world, perhaps as a way to escape or enhance the physical world. But in the future, AR will serve as a pathway back to the real world, allowing users to take breaks from full virtual immersion–maybe to eat or exercise–without completely disconnecting,” Yat Siu said.

“We believe AR–or computing overlaid on the world around us–has a smoother path to mass adoption, but will also be better for the world than a fully virtual world,” Navas says.

Hanke, a Pokémon Go millionaire, describes his metaverse as an “reality made better, a world infused with magic, stories, and functionality at the intersection of the digital and physical worlds.” He says it can encourage people to interact more with the physical world and play sports, for example.

The metaverse is a new era of computing for ambient computing

Tyler Ishida of Sony Electronics believes in a merging of realities: “The metaverse may appear as real as ‘real life’ for those participating, thanks to the level of resolution and quality of today’s technology.” According to him, everything points to a more intense entertainment experience that appeals to all the senses.

He could imagine the entertainment aspects of the metaverse becoming the main driver. But he said there are also many other potential applications, such as education, research, industry, IT, and security.

Timoni West, department head of VR and AR at Unity, sees the metaverse more as a new era of computing. Computers are becoming more and more part of the real world.

“They can recognize faces, voices, hands, relative and absolute position, velocity, and they can react to this data in a useful way,” West explains. These context-aware computers, he says, are the path to ambient computing, where computers move from the foreground to the background. Google also talks about ambient computing in the context of the metaverse.

The metaverse: A feast for all the senses?

For XR researcher Dr. Helen Papagiannis, the main thing is to adjust our way of thinking. For her, the 3D visual element is just one aspect. It will be possible to experience the metaverse with all our senses and our whole being, she said.

Our senses could be used in alternative ways that are contrary to what we experience in physical reality. This would open a new door of chances and even create new senses for sensations that are not possible in the real world.

No metaverse without artificial intelligence

For eBay’s head of AI, Nitzan Mekel-Bobrov, it is clear that there will be no metaverse without AI: “As carbon is to the organic world, AI will be both the matrix that provides the necessary structural support and the material from which digital representation will be made,” Mekel-Bobrov said.

AI will shape the shape of the metaverse, he said, primarily at the physical-digital interface. This relates, for example, to the translation of human actions into digital inputs such as speech, eye movements, hand gestures, and locomotion. AI companies and researchers have already made enormous progress in this area.

The metaverse as the new Internet

Microsoft’s metaverse definition is focused on the business world: Microsoft CEO Satya Nadella describes the metaverse as a new platform for a time in which the digital and real worlds are moving ever closer together.

This platform makes it possible to embed the real world in the virtual environment or, vice versa, to integrate digital elements in the real world. The most important thing is that you bring your “humanity” and can choose in which way you would like to experience the metaverse and with whom, Nadella said. He points out that Microsoft wants to be the company that provides the software infrastructure.

Similar to Meta, Microsoft sees the metaverse as a new vision of the Internet that becomes a digital place that can be physically experienced, for example, through avatars that can be interacted with in much the same way as in the real world. “It’s not a vision anymore. You can meet other people in a video game and experience a concert,” Microsoft explains.

A digital twin of the world with gigantic economic potential

Nvidia CEO Jensen Huang sees the metaverse – his company calls it “omniverse” – as “an overlay of the physical world” that will merge many areas such as social, gaming, and industry.

He says it will be the connecting element between many tools and devices, with a focus on digital goods and projects. VR, AR, and AI are expected to play an essential role in accessing, constructing, and managing the digital world. The omniverse and the metaverse will form a new economy that is bigger than our economy today, Huang said.

People will spend a lot of their time in this virtual world of work and life in the future, he said. “We will do a lot of work there and have a lot of robots doing work for us there as well. And we’ll share the results with each other,” Huang predicts.

The metaverse as a spatial, ubiquitous Internet

Chipmaker Qualcomm is equipping metaverse access devices with its processors – smartphones, headsets, and more. Hugo Swart is XR division manager at Qualcomm. He sees the metaverse as an “ever-present spatial internet complete with personalized digital experiences that spans the physical and virtual worlds, where everything and everyone can communicate and interact seamlessly.”

Access to the metaverse is possible with any type of computer, he said: “In the metaverse, unlimited users and businesses can explore, create, socialize, and participate in a wide variety of communities, daily experiences, and economic activities in 2D and 3D.”

Tech founder and former Twitch manager Shaan Puri offers an interesting definition: He doesn’t see the metaverse as a virtual place. Instead, he says, the term describes a specific point, much like the Singularity stands for the moment when artificial intelligence leaves human intelligence behind.

“The metaverse is the moment in time where our digital life is worth more to us than our physical life,” Puri writes.

This gradual evolution is taking place over the next ten to twenty years, he adds. Attention is increasingly focused on the digital rather than the real world: “We will go from 50% attention on screens to ~90%+. That’s the moment in time when the metaverse starts. Because at that moment, our virtual life will become more important than our real life.”

“Everything goes digital. Your friends, your job, your identity,” Puri writes.

Meta CEO Mark Zuckerberg also talks about the metaverse as a moment in time. For him, it is that moment when we use more XR devices than conventional computers in everyday life.

Seven core features of the metaverse

In July 2022, Ball’s standard work “The Metaverse: And How it Will Revolutionize Everything,” in which he updated and expanded his theses.

Ball avoids a narrow definition of the metaverse and instead lists seven core features that can be found in his essay “The metaverse: What It Is, Where to Find it, and Who Will Build It” from early 2020:

Recently, Matthew Ball also described what the Metaverse is definitely not.