The Israel Museum is showing a virtual reconstruction of the Great Synagogue of Aleppo. The VR experience is based on 75-year-old photographs.

The Great Synagogue of Aleppo was built between the fifth and seventh centuries CE, destroyed and rebuilt twice. In 2016, it fell victim to the Syrian civil war and has lain in ruins ever since. The Israel Museum is now making it accessible again in VR.

In 1947 anti-Jewish riots broke out in Aleppo and the large synagogue was set on fire. Sarah Shammah fled on the last plane from Beirut to Israel, taking with her fifty photographs and negatives of the synagogue.

Shortly before, she and an Armenian photographer had created a memorial album about the old building. They photographed every corner of the synagogue as well as the Aleppo Codex, which is on the UNESCO World Heritage List. After the fire, the manuscript disappeared and reappeared incomplete only years later.

Today, these images provide the basis for the digital reconstruction of the Great Synagogue of Aleppo.

“In 1947, knowing that the borders might close, and that a war could break out, Sarah Shammah used the best technology of her time, which was photography, to do what no one else had done taking 360 degree photographs of the synagogue,” said Avi Dabach, a developer of the VR experience.

With virtual reality, he said, the team is now using the best technology of our time to showcase Shammah’s work.

The VR exhibit “Back to Aleppo” at the Israel Museum in Jerusalem features Sarah Shammah’s story and offers a virtual tour of the synagogue. It was created using photogrammetry, mapping, and the photographic archival data dating back to the early twentieth century. 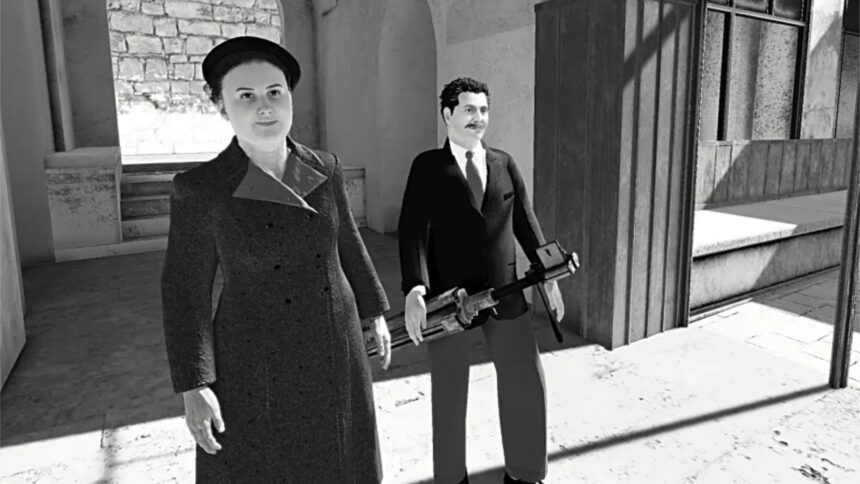 Sarah Shammah photographed every corner of Aleppo’s Great Synagogue 75 years ago and is honored today in a virtual reconstruction. | Image: Israel Museum Jerusalem

Dabach and his colleagues worked on the VR experience for five years. Based on Shammah’s work, the team wanted to represent the synagogue exactly as it looked when the photos were taken. “When we saw (the initial version) the first time it was so impressive and we felt the difference. This is not a film. This is being present in a place, being present at a special time,” Dabach says.

“We are trying to connect to a younger audience and we can do this through high tech. We don’t do this for every synagogue, only for one that does not exist. It is a mixture of the old world and the future world,” explains Revital Hovav, curator of the exhibition.

Reconstructed synagogues can also be experienced in Germany

Those who want to experience the “Back to Aleppo” journey can register for tickets on the Israel Museum website. The event runs from June 16, 2022 to December 31, 2023.

A similar project can also be seen in Germany. Marc Grellert of Darmstadt Technical University has already reconstructed 25 synagogues in virtual reality. His works have been on display in Frankfurt am Main since the end of 2021.