Around 1,400 synagogues were destroyed by the Nazis during the November pogroms in 1938. But they are being recreated virtually: A scientist at the German Technical University of Darmstadt has already reconstructed 25 synagogues for virtual reality.

“For many, the topic of synagogues is completely new,” says Marc Grellert, a doctor of engineering at Darmstadt Technical University. “Many are also unaware of how magnificent these buildings once looked.”

The architect has now digitally reconstructed 25 synagogues destroyed by the Nazis. For him, it’s clear: “As far as the feeling of really being present in a room, nothing beats virtual reality. By now, the technology is so good and so cheap that it’s relatively easy to do.”

Grellert is creating the digital models with students from the Digital Design department at TU Darmstadt. Three to four students work on a single synagogue for three semesters. In the process, they learn the technical know-how, but also a lot about Jewish culture in connection with the synagogues.

“It starts with finding sources,” Grellert says. “In many cases, fortunately, there are still building plans, sometimes photographs. Because they are black-and-white photos, the colors of the interior are unclear at first. Sometimes we are lucky and can track down contemporary witnesses who report from their own memories what a synagogue looked like inside.”

The team uses 3D Studio Max to create the models, add textures like wood or brick looks, and finally set the light. From where does the sun shine through the windows, how is the light reflected?

Those who then put on VR headsets take a short trip back in time. Inside the synagogue, viewers sit on a bench while rays of light fall through the windows from the side and choral music plays. By pressing a controller button, the viewer’s perspective changes to the gallery and opens up a view of the synagogue interior. 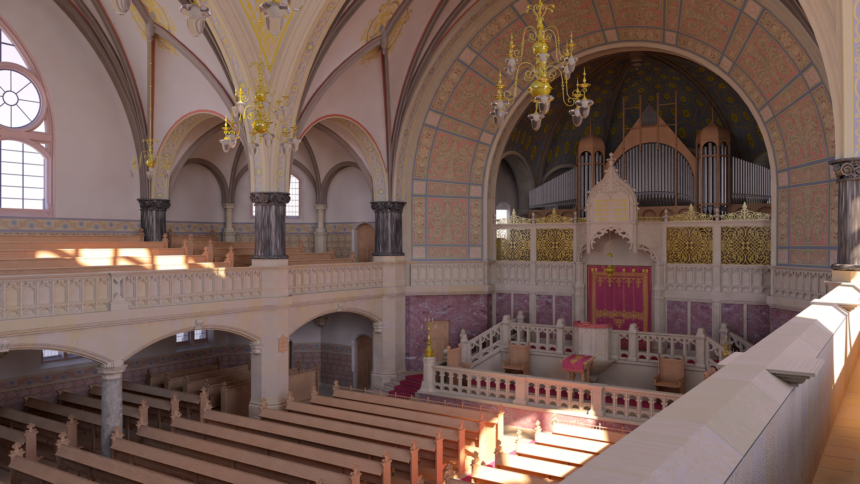 The interior of the Dortmund synagogue: Destroyed Jewish culture and history come back to life thanks to VR. | Image: Marc Gellert, TU Darmstadt

Grellert thus brings almost forgotten Jewish religion and culture back to virtual life. For example, the synagogue in Dortmund with its almost oriental-looking domes, the velvet-red walls of the former synagogue in Hanover, and a cross-shaped dome in Cologne with a blue night sky and stars that shines in brilliant colors.

The synagogue of Plauen looked surprisingly modern: in the Bauhaus style with green-blue whitewashed walls, it was only inaugurated in 1930 before Nazis destroyed it eight years later.

Since the end of 2021, it has been possible to view Grellert’s digital work in an exhibition. In the “Hochbunker” at Friedberger Anlage in Frankfurt am Main, the association “Initiative 9. November” has set up an exhibition.

Here, visitors can use the Meta Quest 2 VR headset to transport themselves to the Frankfurt Synagogue, which stood at this exact location. The experience is offered as a VR film, as the organizers would rather not overwhelm visitors with an interactive VR app. 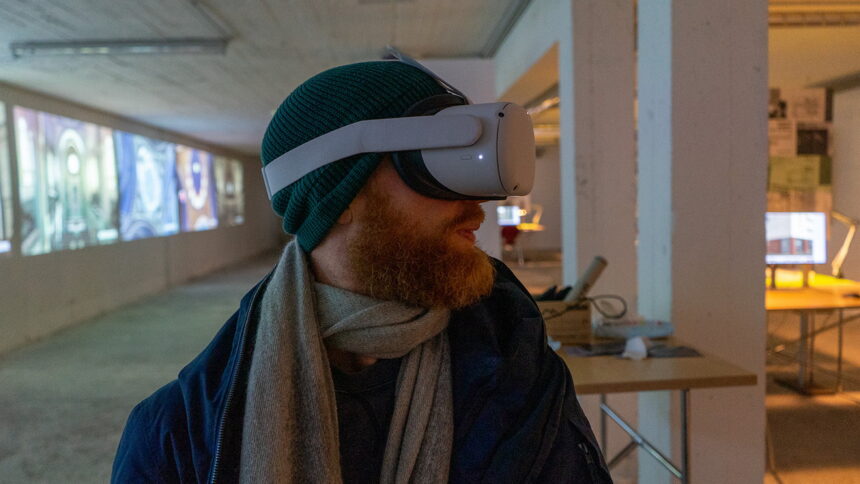 MIXED author Jörn Schumacher goes on a VR journey into synagogues of the 1930s in the Hochbunker Frankfurt. | Bild: Jörn Schuhmacher / MIXED

Visitors can use VR headsets to view the building, which was destroyed in 1938, at no less than three locations in Erfurt: at the “Neue Synagoge,” at the “360 Grad Thuringia Digital Discover” exhibition in downtown Erfurt, and at the “Topf & Söhne” memorial site.

On a website, you can view the 3D model of the Great Synagogue of Erfurt in a web interface – but of course, this cannot be compared with a visit in virtual reality. The Jewish Community in Nuremberg has also shown interest in Grellert’s work and would like to present the virtual synagogues on site.

Grellert takes advantage of another side effect of digital reconstruction: the 3D models can be printed from the computer into a physical model using the “rapid prototyping” method. In Kaiserslautern, one of Grellert’s models, made of plaster and open in cross-section, is already on display, allowing a look inside. The Jewish Museum in Berlin also already has four synagogue models on display. 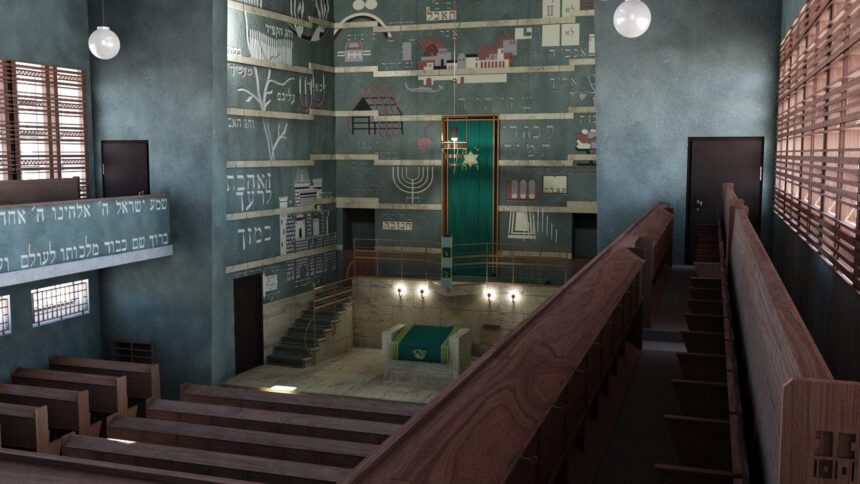 View from the gallery of the Plauen synagogue reconstructed in VR. | Image: Marc Gellert, TU Darmstadt

Meanwhile, Dr.-Ing. Grellert is working on a new project: the digital reconstruction of the Jewish quarter in Cologne. There, a huge archaeological zone extends over an area of 6,000 square meters near the Rathausplatz. A new museum is planned here and the virtual synagogues will be a highlight of the exhibition.