Experience base jumping in VR, built by a THE VOID co-founder

Have you always wanted to glide through the air in a wingsuit, but are afraid of the risk? Consider a VR base jumping simulator.

A comeback for The Void is already in the works. However, one of the Void founders will no longer be a part of the new life cycle. James Jenson developed a new location-based VR experience recently: a wingsuit simulator.

“The Jump” simulator enables base jumping in virtual reality

The extreme sport of base jumping with wingsuits is estimated to be practiced by less than a thousand people worldwide. For most people, flying along mountains is not an option simply because of the high risk.

With “The Jump,” you can now experience this feeling completely risk-free. The VR experience takes you into a mini-hangar where you slip into a real wingsuit and jump out of a flying plane – in virtual reality. 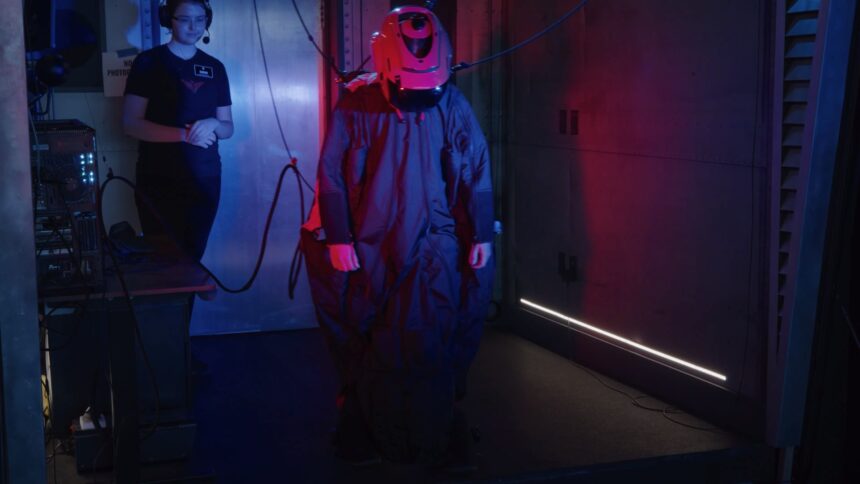 Before the flight comes the jump, which should require some effort given the realistic VR environment and real air currents. | Image: Limitless Flight

James Jenson and his team worked with real base jumpers to make the experience as realistic as possible. The developers modified a Valve Index (review) for the VR experience and fitted it into a full helmet. The wingsuit is equipped with motion trackers and fills with air during the experience to simulate the air currents of a free fall.

Of course, you hang from a device with your arms and legs outstretched but have the same freedom of movement as in a real base jump. First of all, however, you’ll have to jump out of the virtual airplane, which will take some effort.

You walk towards a ledge in physical reality. In the VR headset, you see the interior of the plane and how its cargo hatch opens. Wind currents provide the necessary realism while you slowly move your toes over the edge and, finally, jump.

In addition to the jump from the airplane, The Jump also includes a wingsuit flight in a mountain range, where you’ll fly right past rocks and ciffs. To make the VR experience as realistic as possible, the developers used photogrammetry scans of a real base jump station in Utah.

See what the whole experience looks like in the following video. Mike Cussel from the YouTube channel Virtual Reality Oasis tested The Jump.

So far, there is only one way to experience The Jump and that is in Salt Lake City, Utah. However, if successful, the founders would like to expand the VR experience to other locations. An offshoot in New Jersey is already in the planning stages. The price for a virtual base jump is $119.