Luke Ross brings Elden Ring to virtual reality. The modder plans a radical change of perspective for the VR port.

The maker of popular VR mods for games like Cyberpunk 2077 or Red Dead Redemption 2 strikes again: This time it’s off to the Interlands. Luke Ross wants to bring the impressive and at the same time deadly world of Elden Ring to virtual reality. However, he might run into some difficulties in the process.

The open-world adventure Elden Ring is a gigantic success. Critics and gamers alike are celebrating the new title from Japanese game developer From Software, and publisher Bandai Namco sold more than 12 million units worldwide in the first three weeks after release.

Despite the fans’ enthusiasm after the release, Luke Ross took up CDPR’s vision of the future and developed a VR mod for Cyberpunk 2077 – with success. The mod was well received by fans and drew players even deeper into the world of Night City.

Elden Ring: In VR, you play from a first-person perspective

Night City is virtually predestined for a virtual reality excursion. VR headsets are part of the story and the graphically opulent level design invites you to marvel at the gorgeous cyber city.

Besides, Cyberpunk 2077 is programmed from the ground up for the first-person perspective and the gameplay is designed for it. Elden Ring, on the other hand, is an entirely different game. 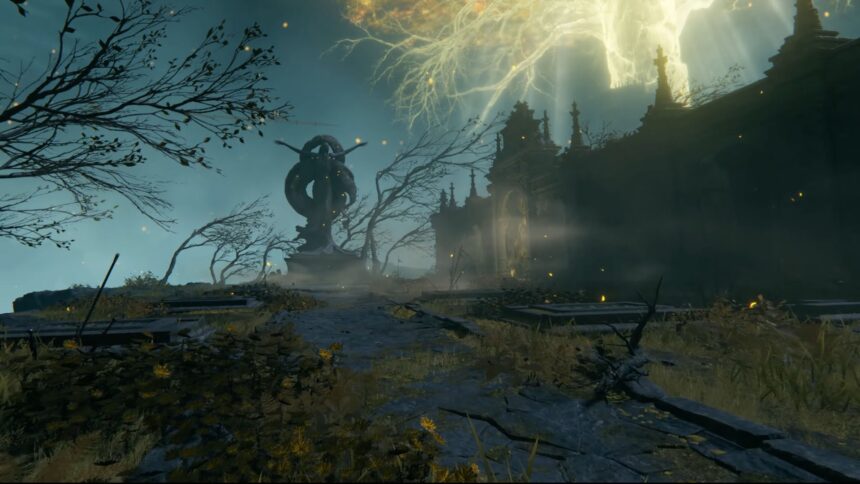 In Luke Ross’ virtual reality mod for Elden Ring, you explore the game world from the first-person perspective. | Image: From Software / Luke Ross

The first thing that stands out is that Ross changes the perspective from third to first person in his Elden Ring VR mod. In the original game, you look over your hero’s shoulder. In the VR mod, you become the protagonist yourself and wander through the open fantasy world from a first-person perspective.

According to Ross, it is possible to keep the original perspective, and he is even considering offering a third-person perspective adapted to VR, but he does not recommend it. In Elden Ring, you are about five meters away from the character, which doesn’t work well in VR, Ross explained in an interview.

Although this perspective invites exploration, it pulls the player out of the action. Hellblade: Senua’s Sacrifice VR proved the opposite years ago, one could argue.

Elden Ring VR: why the first-person perspective could be a problem

In the original game, there is a logical reason for the third-person perspective: players must always keep an eye on the environment. There are no quest markers or other signposts in the game, and you have to explore the world on your own. Moreover, enemies, traps or aggressive animals lurk everywhere. The core element of the game is the challenging battles at every turn.

The world of Elden Ring is dangerous: if you’re not careful, you’ll quickly lose your virtual life. The combat system is designed for perfect timing and never forgives mistakes. Precision is an absolute must. Only those who dodge, block and attack at the right moment have a chance in the challenging duels.

These actions are difficult to learn even for experienced gamers – and that is with a controller. Imitating the movements with similar precision with hands and arms in virtual reality could cause even more frustrating moments than the 2D version’s fights already do.

Motion sickness: Does the hectic gameplay lead to nausea?

Elden Ring’s gameplay could also become hectic and lead to motion sickness. After all, the most important defense element in Elden Ring is the dodge roll. Ross is aware of this issue: When we roll or do other scripted animations like combat moves, the camera follows the character’s head. 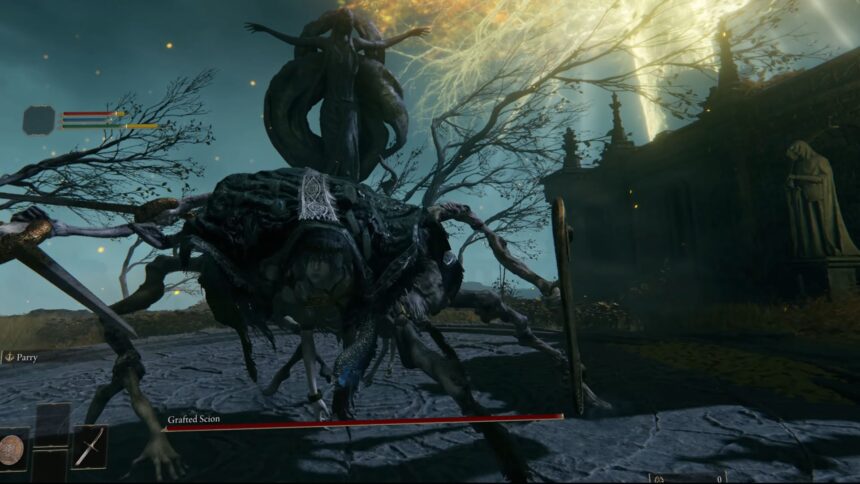 Boss fights from the first-person perspective should be especially challenging. | Image: From Software / Luke Ross

The position of the figure changes, but it remains correctly oriented – according to what the head does in real life. The horizon always remains horizontal and the world always looks stable, Ross says. So the gamer’s gaze in VR stays straight ahead even when rolling sideways.

Ross emphasizes that his mods are made for gamers who are already used to more experimental movement patterns. So they should already have some experience with the various locomotion options in VR games.

In a first teaser video, the modder shows gameplay from the first-person perspective. Ross explores a dilapidated church, collects items and reads a cryptic message – one of the rare quiet moments in Elden Ring. He then opens the door, bends down, and squints carefully around the corners – a helpful mechanic that doesn’t exist in the non-VR version.

He moves fluidly through the world, smashing crates and crossing a suspension bridge. Then one of the swift and many-armed spider creatures attacks him. Unfortunately, you don’t see much of the fight. The teaser also doesn’t show jumping or riding the spectral horse. Both mechanics are essential to reach certain areas in Elden Ring, so there must be a VR-specific solution.

Ross plans to release the first version of Elden Ring’s VR mod at the end of the month. He emphasizes that it is a work-in-progress and there is still a lot of work ahead.

You can read more about Luke Ross’ work on VR mods in our interview.