While open-world games are among the most successful video game genres on the PC and consoles, they eke out a niche existence in VR gaming.  The development and marketing of such games devours hundreds of millions of US dollars, which cannot be recouped in the VR niche market, let alone make a profit.

Even VR ports are a rarity, hardly tackled by the big studios as the revenue would be negligible, Skyrim VR being the big exception.

From VR modding to dream job

With demand from hardcore gamers high and publishers failing to meet it, a vibrant modding community has sprung up in recent years to adapt big 2D hits for PC VR.

On Patreon, Ross currently has more than 2,000 supporters who pay him $10 a month for access to the latest versions of his mods. The number of subscribers goes up and down throughout the year, and after Patreon fees and taxes, Ross tells me he still makes about $10,000 a month.

That equals or exceeds the salary of a senior game developer. There’s no question about it: Ross has discovered a market niche and turned his hobby into a lucrative dream job. It’s a feat that no one is likely to copy in the near future.

Cyberpunk 2077: This is how it looks in virtual reality

Before his modding career, Ross was a freelance software developer with a passion for video games.

“I’ve been a gamer all my life and I always loved new technologies, especially when they allowed the gaming experience to become more immersive, like with 3D glasses,” Ross tells me. He was on fire for the emerging virtual reality market: in 2012, Ross was among the first backers of the Oculus Kickstarter.

Ross started modding much earlier. A big fan of the first-person shooter No One Lives Forever 2, he developed a mod that made the game compatible with Nvidia 3D Vision and its 3D shutter glasses. When the first commercial VR devices hit the market, Ross didn’t hesitate and programmed a mod that made NOLF 2 playable with VR headsets. That was 2017.

“The reaction by VR users was very friendly and encouraging and that prompted me to later tackle a much bigger and complex game: GTA V,” Ross says.

As a result, his R.E.A.L. mod has been downloaded by more than 150,000 users so far. “After that, I just decided to take the plunge and see whether I could become a full-time modder.”

Ross on VR hype: “It all happened too suddenly”

Ross works as a solo developer, but could soon be looking for communication support. There is currently talk of creating a Chinese fan base, and his mods are said to be attracting a lot of interest in Germany as well.

If the demand is there, why aren’t the big studios porting their games themselves, I ask Ross. “It’s a sad combination of many factors,” says Ross.

In the first years of the VR hype, between 2012 and 2016, “all happened too suddenly,” he says. Excessive expectations on the part of investors and gamers blocked the healthy development of the VR market. The final nail in the coffin, according to Ross, was the unfortunate timing of the introduction of dedicated VR controllers.

“Game developers were suddenly expected to create games using a completely different paradigm than they had perfected for many years in the past: everything in their games was now supposed to be interactive and respond to the presence of your virtual hands,” Ross explains.

VR controllers: a curse instead of a blessing?

Studios and publishers reacted “in a very natural way”, Ross says: “When pressured to deliver a completely different product, tailor-made for a niche market that was still in its infancy and could guarantee no big returns, they simply clammed up and decided to ignore VR as a passing fad.”

It would have been better if VR companies had focused on gamepad VR, at least for starters, instead of scaring the rest of the industry with premature innovations, Ross argues.

“What defines VR is being ‘inside’ the game, not being forced to flail your arms about every time you need to interact with something. That is especially true of games that last for hundreds of hours, like the huge open-world titles that I focus upon. You want to be seated, with your hands relaxed in your lap, for that kind of prolonged gaming sessions,” says Ross, who deliberately doesn’t include motion control support in his mods.

Ross comes down hard on Valve

His criticism is also directed at Valve, which he says has exhibited “schizophrenic” behavior. On the one hand, the company had set an unattainably high bar with Half-Life: Alyx and the insistence that “everything must be done in new and awesome ways specifically for VR.”

On the other hand, Valve would have done an ” unbelievable about-face” by abandoning all VR projects and switching to Steam Deck. “What a weird way to set an example for VR adoption,” Ross says. 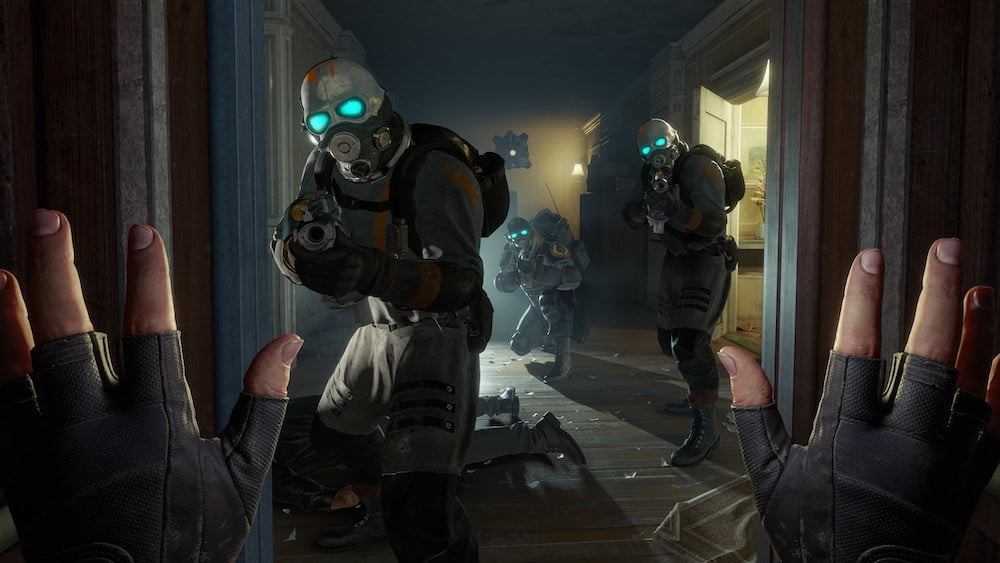 Half-Life: Alyx was a shining example for the VR industry. But since then, you don’t hear much from Valve. | Image: Valve

Ross’ agenda is simple: He wants to restore the belief of consumers and developers “that VR is possible, right here and now.” The VR market must first develop along with the familiar gaming paradigms, Ross believes. Only when it has matured can investors think about new forms of interaction.

“Trying to do the opposite, i.e., asking for huge investments before the market is ready, is a sure way to kill the golden goose and be left with nothing,” Ross says.

Luke Ross makes good money from other people’s games. Could that become a problem and major publishers put a stop to his projects? Ross has no worries about that.

“I think the situation is very different from what befell some other modders because I only provide an additional way to enjoy the original games, which in the end means more copies sold for the developers and publishers.”

Still, he can imagine a certain conflict scenario: when the owners of a gaming brand develop their own VR port that competes with his VR mods. In that case, he would be willing to scrap a project or negotiate a win-win situation.

Would it be conceivable for him to sign on with a major studio to develop an official VR port? For Ross, that’s currently out of the question.

“I had a few interesting offers, and I will certainly consider any proposals that should come my way with the attention they deserve, but I feel that I can have a much larger impact as an independent modder,” the VR modder says.

Luke Ross wants to keep going, “As long as people are interested in playing huge open-world games in VR, I will keep doing this.”

Want to try out Ross’s mods? Then check out his Patreon page. His VR mod for GTA 5 is available without a subscription at Github.

For a collection of the best 2D VR mods, check out our VR mod list for gaming hits. You can get in touch with the developers and fans via the Discord server of the “Flatscreen to VR Modding Community”.