You can now admire the works of H.R. Giger in VR

A U.S. artist and admirer of H.R. Giger (1940-2014) wants to complete one of the “Alien” creator’s most ambitious projects in virtual reality.

The Swiss artist became famous for his “biomechanical” style, which fuses the aesthetics of human bodies and machines into an unprecedented whole. Giger’s work includes drawings, paintings and sculptures. His most famous creation is the alien monster from the film series of the same name, also known as Xenomorph.

In 1997, Giger bought the Château Saint-Germain in Gruyères, Switzerland, and opened his own museum there. The artist loved trains and wanted to build a kind of ghost train in the masonry, like those found in amusement parks. His dream was for visitors to the museum to experience his art in this way. Giger died in 2014 and was unable to realize the project.

That’s where New York artist Robert Morris comes in, whose work is inspired by Giger’s, and who worked with the museum on several projects. His specialties include art drawings, special visual effects, 3D printing, photogrammetry – and virtual reality. 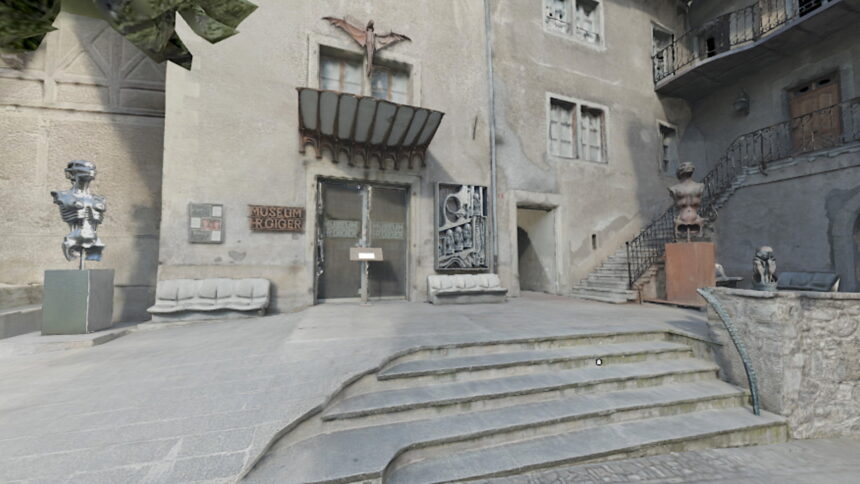 So far, only the entrance area of the VR museum is accessible. | Image: MIXED

Morris is currently working on numerous VR projects, including a photorealistic Victorian-style cabinet of curiosities. The VR app is in development for PC-VR and features hundreds of rare objects from Morris’ collection and various museums, digitized in great detail via photogrammetry.

His latest endeavor is to complete Giger’s vision of a museum train ride as accurately as possible in virtual reality, based on notes and drawings the Swiss artist made before his death.

I visited the Giger-Musem, but there is not much to see yet

The beginnings of this project can now be explored as a WebXR experience. Morris has ported some of his work to a Mozilla Hub world.

I entered the room via the browser using Meta Quest 2 and had a look around. Unfortunately, only the photogrammetrically reconstructed entrance area of the museum is currently accessible, as well as some sculptures. Nevertheless, the VR excursion is worthwhile for Giger fans.

Morris plans to release a Mozilla Hub preview of the project soon, but only for his Patreon supporters. The final version will be developed for PC VR and funded through Patreon. It is not known when it might be ready.

This is how you can enter the existing space: Open the Meta Quest browser and this article. Then click on this link, which should take you to the artist’s VR Hub portal. From here, you can change the museum room in question. By the way, this also works without a VR headset.

If you are keen to learn more about Morris, you can visit his website or Discord server.