An architectural study aims to shed light on the relationship between design and social status in ancient Roman buildings. How does virtual reality help?

Researchers reconstruct a house from the Roman city of Pompeii entirely in virtual reality. In virtual tours, the scientists measure which areas of the ancient rooms particularly attract the viewer’s attention. Eye-tracking provides entirely new insights.

In their study, the research team led by Danilo M. Campanaro and Giacomo Landeschi refers to ancient literary sources that point to the importance of the viewing angle in Roman residential architecture.

The two scientists are studying these sources in the remains of the city of Pompeii, which was destroyed by a volcanic eruption. According to Campanaro and Landeschi, the results so far indicate that optical axiality played a key role in the perception of the Roman buildings and their political importance.

However, they say many questions remain unanswered, such as which spaces were visible to visitors and how the design of interior spaces affected the social atmosphere. In clarifying these, virtual reality and eye-tracking provide crucial clues.

Over the past 15 years, scientists have combined various techniques such as geographic information systems (GIS), 3D modeling and virtual reality to digitally reconstruct ancient buildings and understand the motivation behind Roman interior design.

Now, for the first time, the researchers collected data on the visual attention of observers in a virtual reconstruction by sending volunteers on a tour of the famous “House of Greek Epigrams” in VR. What particularly attracts the attention of the observers? The researchers measured this using eye-tracking and drew conclusions about the design and the motivation of the Roman interior designers from the collected data.

The “House of the Greek Epigrams” stood in the northeast of Pompeii and was decorated with many frescoes. In 79 AD, the eruption of Mount Vesuvius destroyed the city and the house. Campanaro and Landeschi reconstructed the building completely, including the frescoes and paintings, in the 3D modeling software 3D Studio Max. 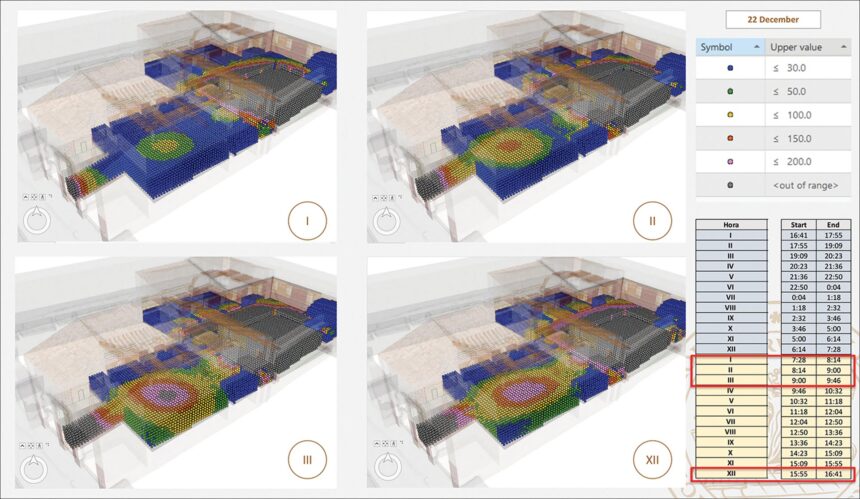 The researchers reconstructed an ancient Roman house from the city of Pompeii. | Image: Cambridge University

They then imported the digital model into the Unity game engine to prepare it for the VR headset and simulate the incidence of light into the building. Five study participants walked through the virtual house in two different scenarios: at dawn on the winter solstice and at midday on the summer solstice.

Romans tricked out the design of their houses

For the researchers, the data collected through eye-tracking provides interesting insights. The interaction between people and their environment can thus be analyzed in a completely new way. This enables, for example, insights into the connection between lighting and the social experience of art, graffiti or murals.

According to Danilo Marco Campanaro, the results of this study show how the owner of the house stimulated the senses of visitors to convey a message about his power and wealth. Sloped walls or raised floors, for example, were designed to make Roman interiors seem larger to visitors.

According to Dr. Landeschi, the next step in this study could be to overlay the results with multisensory studies involving the sense of smell and hearing.