A VR documentary takes you into virtual reality for 48 hours straight, sending you 100 years into the future.

350 square meters of explorable space, 50,000 plants and 40 hours of audio recordings are packed into the VR documentary “Gondwana.” It is the world’s first “virtual reality permanent installation.” Those who want to experience Gondwana in its full length need to bring a lot of time with them. The experience lasts a full 48 hours.

Filmmakers Ben Joseph Andrews and Emma Roberts spent five months in 2019 in the rainforest of the Daintree National Park in Australia. They collected as many impressions as possible and researched flora and fauna. Then, they used the collected data to simulate a complete ecosystem in virtual reality.

Upon their arrival in the 180-million-year-old rainforest, Andrews and Roberts were overwhelmed: “We scrambled our phones, our computers. We embraced the cycles of time that occur in the forrest,” Andrews describes their arrival during the rainy season in an interview. “That letting go and surrendering gave us time to listen and gain a deep appreciation of the multi-layered nature of that environment.”

The future of the rainforest in 48 hours

The VR documentary “Gondwana” is currently screening at the Melbourne International Film Festival and was part of this year’s Sundance Film Festival and SXSW editions. Gondwana transports viewers into a 350 square meter virtually reconstructed section of the Daintree Rainforest.

The VR experience takes viewers through the virtual forests, along rivers, and across mountains. Every 14 minutes, the simulated ecosystem jumps one year into the future. It reaches a speculative version of the year 2090.

During the journey through space and time, it is possible to observe how the plant world changes over the years. Each run of the film leads to a different simulated ending. Audience participation also influences the development of the virtual rainforest.

“We’re not curating the perfect experience,” Andrews explains. “Nature, chance, and rarity are important. The environment has these moments that are super precious and rare – and you are never going to witness the entire thing, you’re not central to it.”

The longer users stay in Gondwana, the more robust the rainforest becomes. The longest visit in the VR documentary at one stretch so far lasted 16 hours.

“We wanted to propose that no one person can save the whole forest, but collectively we can prevent it from degrading,” Roberts said. “We wanted it to be open to possibilities like protection and resilience. It was a paradigm shift for us. And I think that’s an important way to be thinking about one of the biggest issues of our time.”

Collaboration with science and indigenous people

The 48-hour VR documentary took a total of four years to develop. Along the way, Andrews and Roberts worked closely with scientists to realistically recreate the climate-induced changes in the ecosystem. The Kuku Yalanji elders also played an important role in the research for the VR documentary. The Kuku Yalanji people are one of the oldest living cultures. They have lived in the rainforest around Queensland for about 50,000 years. 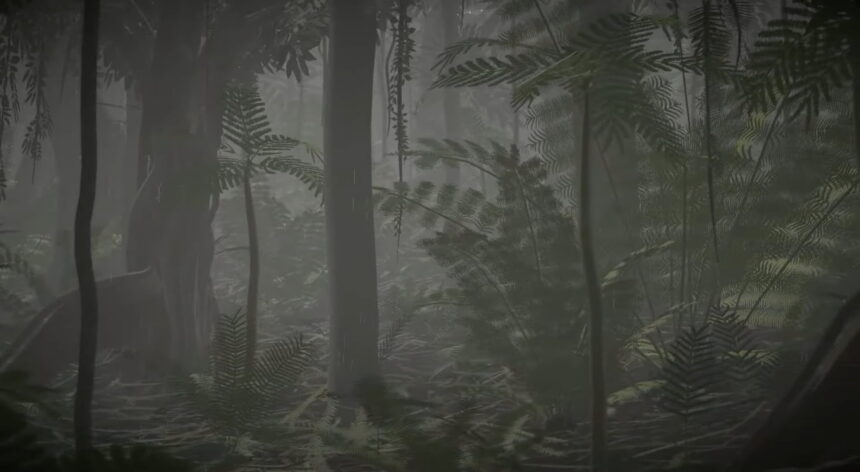 The makers of Gondwana VR worked closely with scientists to realistically recreate the evolution of the rainforest. | Image: Ben Joseph Andrews, Emma Roberts, The 2050 Group

“Their seasonal calendars were no longer matching up with their traditional understanding and knowledge – tens of thousands of years of knowledge,” Andrews describes. “This idea of falling out of sync was like an important artistic metaphor that we had to grapple with.”

The Daintree is essentially going through the “equivalent of the bleaching of the Great Barrier Reef, the much better-known next-door neighbor,” says Roberts. “But the destruction is much harder to spot if you don’t know the difference between your ancient Gondwanan species and your modern Sumatran Jungle species. You can’t see the change that’s happening. So, we took that metaphor of bleaching into the experience.”

Gondwana portrays the decline both sonically and visually. Gondwana VR wants to sensitize viewers to this decline of the rainforest. Throughout the film, individual plants and animals that are threatened with extinction bleach out. At first, they become single ghostly shadows in the twilight. Slowly, the bleaching spreads over the entire rainforest. Birdsong disappears completely at some point.

“We started looking at the data in detail – it was a shocking, shocking portrait, even of what we’ve lost already. We went through this very dark night of the soul,” said Roberts. “To take that experience of living there and then to learn what we stand to lose … it was like learning about the painful death of a close relative.”