Aggressive people could learn to control their anger with the help of virtual reality. How does anger management work in VR?

Researchers at Yonsei University in Seoul, Korea, have designed VR training for controlling one’s own aggression. In a study, they demonstrate that virtual reality can help reduce the level of anger.

The research team divided 62 unmarried men, aged 19 to 29, into two groups with high and low potential for aggression. They were selected by a special questionnaire that more than 240 participants completed.

In anger exposure training, participants experienced situations in VR that could happen to them in the same way in everyday life. They were asked to perform predefined tasks while following audio instructions and self-assessing their mental state in the situation.

The VR therapy was designed to first provoke the participants and then help them control their anger. In the first step, subjects got into an argument first with a friend, then with a stranger, in various virtual locations. 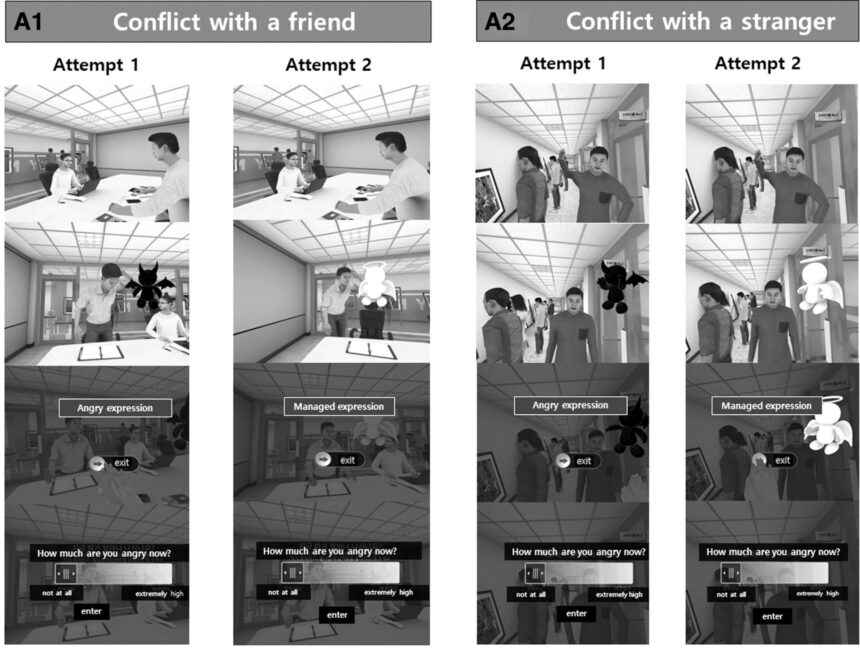 In each situation, there were two possible solutions. First, a virtual “devil” whispered provocations to the subjects and encouraged them to give free rein to their aggression. Second, a virtual “angel” guided them through the situation with suggestions for conflict resolution. After each trial, the men ranked their current level of aggression on a scale of 0 to 100 embedded in the VR experience.

The conflict situations were followed by mindfulness-based and guided breathing and relaxation meditations. The young men performed the calming activities in the virtual apartment or a park and then in the subway among virtual people. Again, they rated how they felt on an appropriate scale.

During anger exposure training, the amount of provoked anger during virtual conflict was reduced in both the high aggression group and the low aggression group through guidance. During the VR mindfulness training, meditation also increased well-being in both groups.

Based on these results, the researchers see further research potential. Future steps could include testing the VR program with people who express excessive anger, have difficulty separating their feelings and thoughts, or suffer from communication problems with loved ones.