The start-up Nofio wants to launch a wireless adapter for Valve Index. Pre-orders will start soon.

Nofio promises a low latency of less than 5 milliseconds, which should not be noticeable in VR (hence: almost latency-free). This is supposed to be made possible by a specially developed compression algorithm, which also ensures a lossless video signal, according to Nofio.

The transmitter connected to the PC supports Displayport 1.4 and compresses the images without putting any additional load on the PC. The relatively new WLAN standard Wi-Fi 6E is used for data transmission instead of WiGig. Visual contact is not supposed to be necessary, but the start-up recommends placing the transmitter and receiver in the same room.

The wireless adapter is supposed to last for more than two hours. According to Nofio, you can connect your own power banks (USB-C) to play longer.

Late and expensive: a costly investment for Index fans

That all sounds very promising. If only the accessory wasn’t so expensive: The finished product is supposed to cost between $399 and $499 and is thus only intended for enthusiasts who swear by Valve Index. 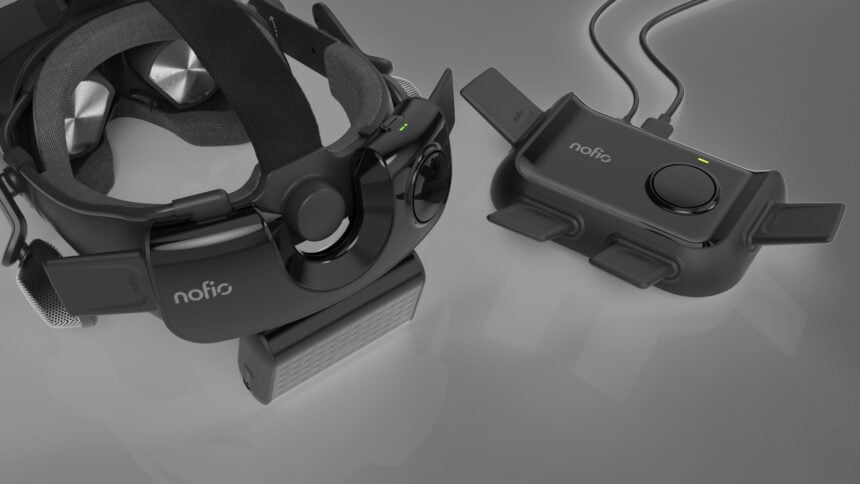 A rendered image of the adapter including the transmitter. | Image: Nofio

Another downer is availability: According to current plans, the wireless adapter will not be released before the first quarter of 2023. At that point, Valve Index will already be almost four years old. Currently, the wireless adapter only exists as a prototype, as you can see in the following video.

Nofio plans to fund its manufacturing through a Kickstarter campaign that launches in August. “The reality is we need all your help to make this happen. We’ve been working on the tech for a long time now, and it really is awesome. But we need the money to fund the purchase of tooling and components etc,” the team writes on Reddit.

The release is planned internationally in the U.S., Canada, Europe and Asia. According to the team, the accessory is designed to be retrofitted to the Index headband and removable if needed. The headset is said to remain undamaged in the process.

Four years is half an eternity for a VR headset. By the time the wireless adapter ships, Valve may have already announced Index’s successor. The device, codenamed Deckard, will likely be optimized for wireless PC VR from the get-go and may also have a standalone mode if we believe recent rumors.

What makes Nofio’s technology particularly interesting is its support for Wi-Fi 6E. Several upcoming devices like Meta’s Project Cambria and Apple’s headset are expected to support the new Wi-Fi standard, which could enable better streaming from external sources than we’ve seen from Air Link, for example. The wireless adapter could be seen as a test run for the technology.