The U.S. Patent and Trademark Office (USPTO) published a patent on a “head-mounted display” from Valve on June 16, 2022. It could show the design of Valve’s upcoming Deckard VR headset. 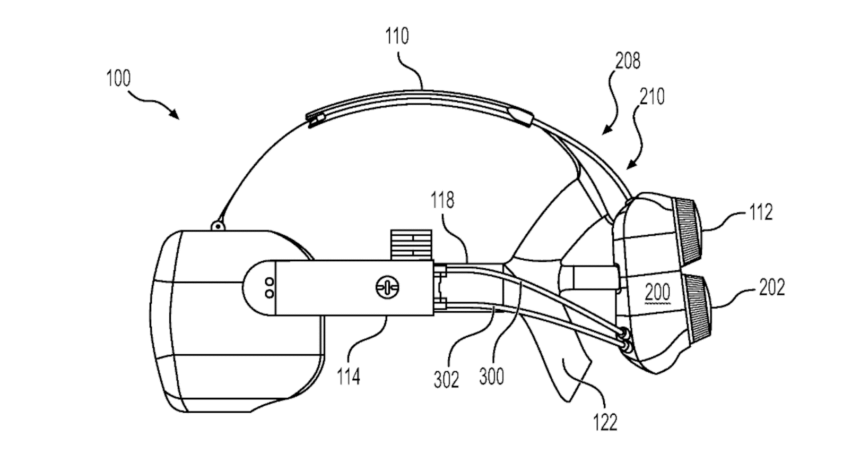 This is how Valve Deckard could look like. | Bild: Valve / USPTO

The descriptions are admittedly limited to the head mount and the routing of the cables from the front to the back of the glasses. However, there are also possible references to multiple computing units as well as operation as a stand-alone headset, e.g., [0052] mentions a wiring harness that could serve as a connection to a rear housing attached to the back of the HMD. The rear housing could house various computer components of the HMD, according to the patent.

The document also mentions wireless VR streaming from the computer to the VR headset as an option. However, it does not reveal any technical specifications. The simple drawings of the headset also do not allow drawing any conclusions about built-in cameras or the tracking system.

The text of the patent explains how the device could fit various head shapes as ergonomically as possible. For example, two adjustment buttons can be seen on the back. Other pictures show floating earphones, known from Valve Index.

The unveiling of Valve’s “Deckard” VR headset might not be too far away. This is indicated by a beta update in SteamVR.

Lynch speculates in a new YouTube video that the reveal will happen in one to two months. There were so many hints in the SteamVR 1.23.2 beta that a mere coincidence is pretty unlikely, Lynch said.

Valve Deckard: unveiling in one to two months?

With Valve’s Steam Deck, there was a similar timing with many leaks, according to Lynch. The official announcement of the portable gaming PC followed about one to two months later. Valve even planned a SteamVR festival with discount promotions to meet the assumed timeline. Another festival was postponed so that it could begin on July 18.

An important hint is the command “deckard_devtools” found in the code. This would allow developers to download their tools for the new hardware, just like Steam Deck.

After some code manipulation, Lynch also found two new systems in the SteamVR settings. They were very similar in structure to the Steam Deck menus. This indicates that a similar operating system is being prepared for the Deckard VR headset.

Deckard is probably primarily intended for wireless connection to a gaming PC. However, there are also hints for standalone operation in the current update, including hints regarding the operating system.

The update channels are already visible in the menu. With their help, the operating system can be installed on the VR headset, for example, in a standard or beta channel, he said. If the SteamVR installation is missing, there are already help options to change this, he said. Linux commands are also already available, for example, for installing SteamVR or restarting the system.

Earlier, Lynch found leaked references to an optional operation of the VR headset with two chip systems. A corresponding hardware extension with an x86 chip could be attached to the back of the head so that it shares the computing work with the ARM chip in the front (also called “split rendering”). Alternatively, the headset could connect wirelessly to a gaming PC so that it takes over a large part of the computations.

The word “Foxnet”, which already hinted at a division of tasks in an earlier firmware leak, also speaks for such theses. The term also appears in the current SteamVR update, namely in connection with WireGuard. This is a fast, security-focused VPN tunnel that could be used to connect two chips.

Speaking of connection possibilities: In the leaked SteamVR settings, there is, among other things, the item “Internet”. Some options should allow a wireless connection to the gaming PC. Users could simply set up a hotspot on their PC so that Deckard can connect to it.

Another new feature is the calibration of the “XRService”. This is probably related to the new camera tracking and additional augmented reality features. You could enrich the recorded environment with game graphics, similar to Meta’s AR demo The World Beyond for Meta Quest 2 and Meta Cambria.

The traditional SteamVR tracking with externally installed base stations is also mentioned in the code. So you shouldn’t throw it overboard anytime soon.

Lynch could already launch a new theater mode. In it, 2D games or movies are shown on an extra-wide virtual screen. Using augmented reality, this huge screen could perhaps even be projected into the real world to give the feeling of being in a movie theater.