In Unplugged: Air Guitar for Meta Quest 2, you can become virtually famous as a VR air guitarist. How convincing are hand tracking and immersion on the virtual stage?

In Unplugged: Air Guitar for Meta Quest 2, you rock virtual stages with an air guitar. The developer team Anotherway does without additional controllers and gives you a free hand, so to speak: The VR game is designed exclusively for hand tracking.

I tried out how well that works. Note: I am a guitarist.

Unplugged Air Guitar is a fun excursion into the world of rock. The hand tracking is rock solid and allows you to shred your virtual guitar. The game has small weaknesses in the campaign and the immersion on stage could be better.

Unplugged: Air Guitar is suitable for you if …

Unplugged: Air Guitar is less suitable for you if …

Getting into Unplugged: Air Guitar is a VR dream come true for all rock fans. The VR game is dripping with rock clichés. During the tutorial, I am standing in a small, dark backstage room of a club, whose walls are covered with posters and stickers. All of them are peppered with references to real rock stars.

Around me are empty beer bottles, a bass drum and a virtual replica of an amplifier from the cult manufacturer Orange. Vertigo Games (After the Fall) and Anotherway have bought several well-known licenses. Besides Orange amps, virtual amps from Marshall are also on stage. I can play with original amps like the Omen Extreme from Schecter.

A large poster of Steel Panther guitarist “Satchel” hangs directly in front of me. When I address it, he comes to life in the picture and provides a few laughs with his biting comments. Anyone who follows the comedy rock band Tenacious D around actor Jack Black will immediately feel at home. Satchel teaches me the fine art of being a rock star.

During the tutorial, Satchel shows me exactly how to handle the virtual guitar and gives me tips for the remainder of the game. The whole experience is explained in a humorous, but understandable way. Since Unplugged: Air Guitar is completely hand-controlled, there is no need for plastic guitars or controllers.

But then isn’t the haptics missing? No, because the game compensates for the lack of haptics with a clever mechanic.

The body of the virtual guitar, on which I strum the strings with my right hand, remains anchored at the level of my stomach. The guitar does not move with me as I walk across the room. With a grip that corresponds to the tremolo of a real electric guitar, I bring it to the right height. With my left hand, I grip the neck, and my hand locks into place. From now on, I slide up and down on the frets or move the entire neck up or down.

With this ingenious design, the developers were able to simulate the weight distribution of a real guitar. The heavy body provides stability, while the light neck remains flexible. On the virtual stage, it almost feels like I’m actually holding a guitar in my hand. And that’s just through an optical illusion.

In games like Guitar Hero or Rock Band, fret patterns buzz toward me, and I have to grab them at the right moment with my left hand on the keys of the dummy guitar and strum them with my right hand.

In Unplugged: Air Guitar, however, there is no tangible dummy guitar with buttons. Instead, the neck of the virtual guitar is divided into four segments, towards which the fret patterns fly. Depending on the pattern, I have to hold one to four fingers against the virtual guitar neck in different combinations. Colored markings help with orientation. 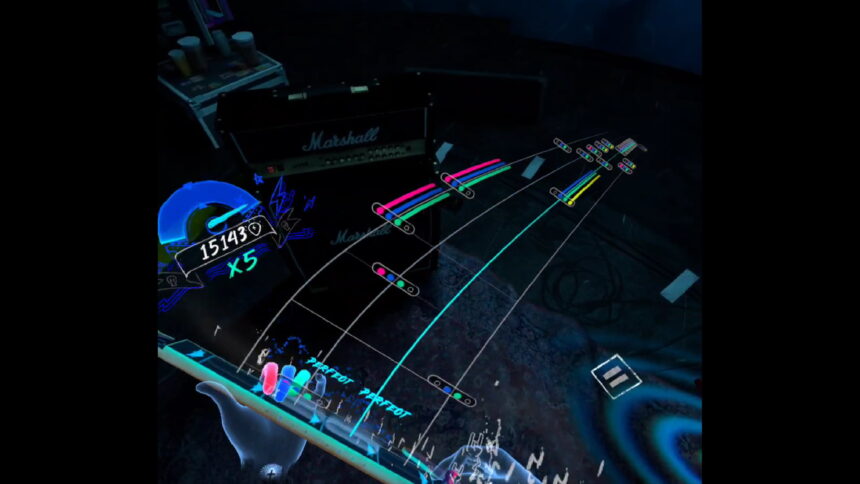 The finger sets are color-coordinated with your fingers. You have to press the finger combination at the indicated fret at the right moment. | Image: Vertigo Games / MIXED

However, this also has a downside. In order for Meta Quest 2 to recognize my hand movements with the tracking cameras, I have to constantly stare at the guitar neck while playing. That is quite strenuous for the neck during longer sessions. At the same time, it robs the VR game of immersion, because I can hardly absorb anything of the atmosphere of the actually great designed concert halls during the performances.

Otherwise, the hand control in Unplugged: Air Guitar works perfectly. It seems as if the air guitar is predestined for hand control. Finger twisting is perfectly recognized even at high speeds. I never felt like I messed up a song because of the controls. And I’ve never experienced more precise hand tracking in a VR game.

The soundtrack offers an interesting mix of many rock subgenres. You’ll find rock classics like Children of The Revolution by T-Rex, Should I Stay or Should I Go by The Clash or indie rock gems by Alt J and Weezer. Well-known rock anthems like Are You Gonna Be My Girl by Jet and hard rockers by Steel Panther are also on the playlist.

Overall, the playlist is a bit small with only 24 tracks. Especially since there are also some lesser-known tracks on the list. Big names like Ozzy Osbourne or The Offspring are represented, but not with their greatest hits.

Wasted potential in the campaign

During the campaign, I work my way through several records, each offering about a handful of songs. Only when I’ve played all the tracks on one record do I move on to the next. With each success, I also unlock a new location. To visit it, however, I must first select it from the main menu.

As I improve my score, I collect fans and unlock new virtual guitars. The virtual stages are lovingly designed and, as already mentioned, offer a great live atmosphere. When I hit the notes correctly, the audience celebrates me; when I miss, they mock me. 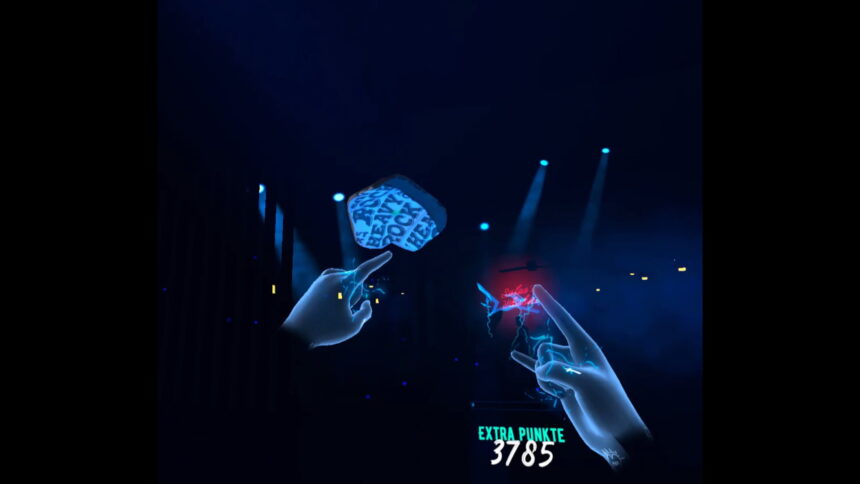 If the fans are satisfied, they throw you some intimate pieces of laundry. | Image: Vertigo Games / MIXED

The longer I play a song without any mistakes, the more bonus points I get. In between, I blow up the high score with cool moves and power items. When the fans cheer me on at the end, I can spur them on with Devil Horns, which can lead to an underwear shower. All of this is fun, but it doesn’t keep me entertained for long.

A good story could have taken me, a rank beginner, on an exciting journey from a rancid small-town club to the biggest arenas in the world and eventually to Rockstar Olympus. Instead, I just play song after song in the campaign without much feedback. Too little happens off-stage.

Satchel also takes a back seat after a strong start. He actually would have had the potential to be the Mr. Miyagi of air guitar art. As it is, the game experience feels like a string of loose parts. There could have been more to it.

However, hand tracking forces you into an awkward head position. You have to constantly stare down at the guitar neck. This posture in combination with the weight of the VR headset can become uncomfortable during longer sessions. It also makes you miss the concert atmosphere during virtual performances.

If you enjoy over-the-top rock star clichés, you’ll have a good laugh in Unplugged: Air Guitar. Steel Panther guitarist Satchel is your mentor and keeps giving you advice, with a humor reminiscent of Jack Black and Tenacious D.

The tutorial is one of the highlights of the game. Rarely have I been introduced to new gameplay as wittily and precisely as I was in Unplugged: Air Guitar. Even the more advanced gameplay mechanics, such as additional finger patterns, solos, bends, and more, are introduced at an ideal pace. The game never feels overwhelming.

However, the song list and the campaign waste potential. The song selection offers an interesting mix of many rock genres, but the really big hits are missing. The campaign lacks a central theme. Apart from the songs, there is not much to experience.