After many revisions and a delay, the ultra-slim and super-lightweight Meganex PC VR headset will soon go on sale.

Between March and April 2023, the time has finally come: Panasonic offshoot Shiftall is launching a device that has been shown in a new, improved version every year since CES 2020 and finally received a Lighthouse adapter for SteamVR last fall. This turned the headset into a SteamVR-compatible PC VR headset and added support for the Index controllers.

The combination of HDR-enabled OLED microdisplay and Panasonic pancake lenses keep the weight down to just 320 grams (without cables). The earcups can be folded, which makes transporting the device easier. Speakers are built in, alternatively, you can connect your headphones via a jack.

Compactness has its price

Shiftall sells two versions of the Meganex. The standard version is aimed at well-heeled consumers and costs $1,699. Base stations and Index controllers are not included and must be purchased separately.

The Business Edition adds diopter adjustment and a nose pad instead of a forehead pad for faster on and off. Both devices come with the Lighthouse adapter. The lens distance can be adjusted manually.

MeganeX provides a Displayport connection to the PC for native PC VR content. It is established via an included converter box. It does not offer a standalone mode.

All specifications are listed below. 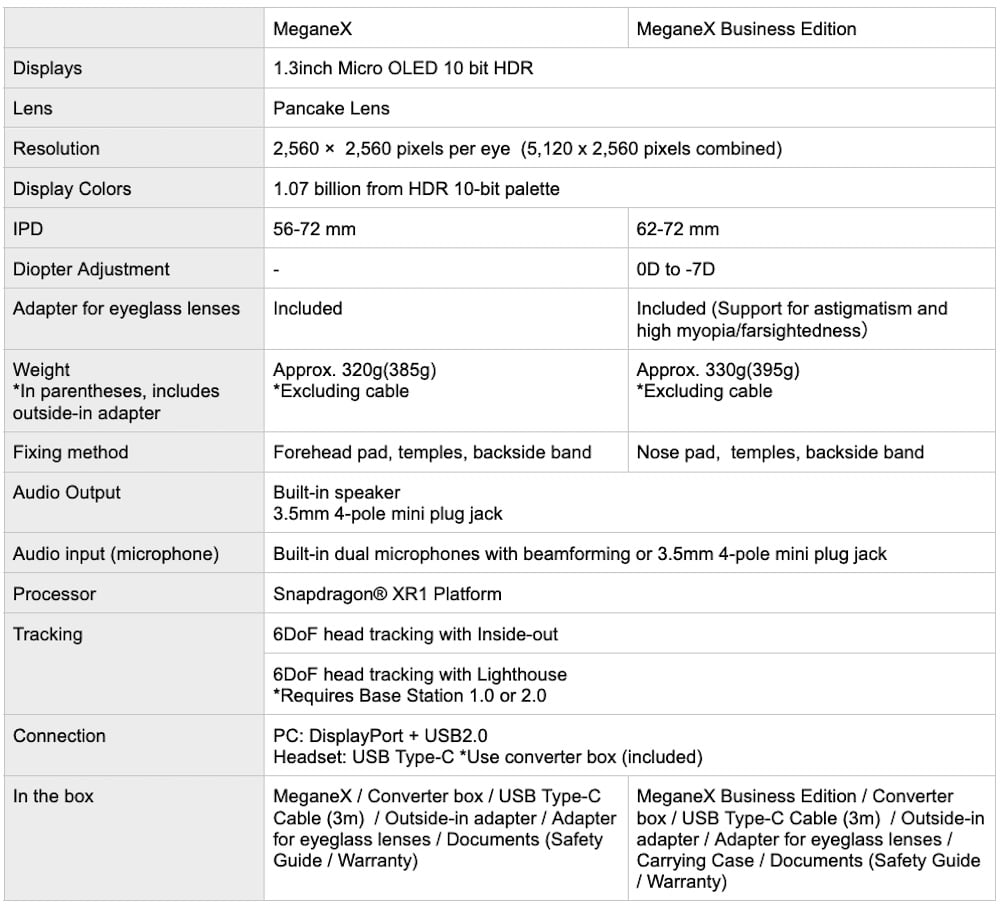 The technical features at a glance | Image: Shiftall

MeganeX was originally supposed to be released as early as Spring 2022 and cost less than $900. It now follows the price trend set by the Meta Quest Pro in October.

Shiftall is showcasing three other VR products at this year’s CES, some of which are curious: the Mutalk, a Bluetooth accessory worn over the mouth that suppresses noise; Haritora X, a full-body tracking solution; and FlipVR, a handheld controller for SteamVR that is worn on the back of the hand and allows you to reach for a glass or cup without having to put down the input device.