Along the Tour de France, spectators can digitally enhance their experience with AR headsets. What can cycling fans expect from augmented reality?

The 2022 Tour de France has been underway since July 1. The cycling mega-event sends 176 athletes through France on two wheels. For the first time, viewers can experience the 109th edition of the three-week stage race in a combination of augmented reality and volumetric holograms.

AR experience for cycling fans directly at the track

French telecommunications company Orange is a long-standing partner of the Tour de France and equips the entire route with the technology required for broadcasts. This year, Orange is offering an AR experience for cycling fans for the first time. The “Augmented Race 2022” delivers a digital accompanying program via AR headsets. 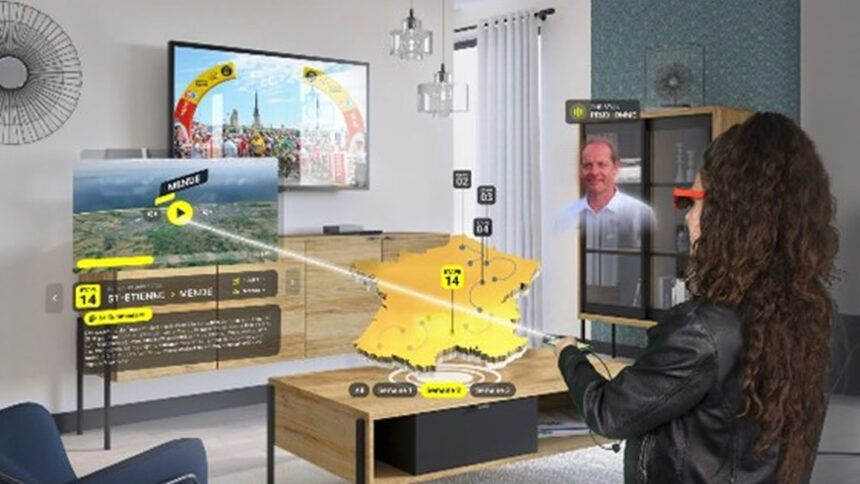 Along the Tour de France, spectators can digitally enhance their experience with AR headsets. The Augmented Tour 2022 is not available for home use. | Image: Orange

In the downhill villages and fan parks, interested spectators will be equipped with augmented reality headsets. An interactive 3D map of the race is superimposed on the real environment and displays all the important information about the individual stages. Via the AR headset, users will also be greeted by a volumetric hologram of Tour de France boss Christian Prudhomme.

Another innovation is the “Immersive Tour.” Orange offers viewers the option of a 360-degree live stream on all stages. Equipped with a 5G smartphone and a 360-degree camera, participants can share their on-site experiences with others.

The Tourchef hologram was developed in collaboration with Matsuko Interactive. The Slovakian start-up is developing, among other things, an AR communication platform that projects holograms into the room during video conferences. A corresponding app is already available for Android and iOS. It is compatible with Nreal Light.

Immersiv.io is responsible for the 3D map and the superimposed information. The French studio has already developed several AR experiences that enhance sports broadcasts with digital screens. These include games of the North American professional ice hockey and soccer leagues NHL and NFL as well as the broadcast of the German Football Super Cup of the DFL in cooperation with Telekom and Nreal.