The Last Clockwinder: A puzzle game gem that’s only possible in VR

Do you love puzzles, fairy tale worlds and game mechanics that only VR can deliver? Then The Last Clockwinder is just the thing for you.

In this VR game you clone yourself. Again and again. And build wondrous machines from your clones.

The Last Clockwinder offers tried-and-true gameplay that is implemented here almost flawlessly. The game is enhanced by its fabulous story and game world, which will enchant you and stay in your memory for a long time.

The Last Clockwinder follows in the tradition of virtual reality games like Moss, A Fisherman’s Tale and Maskmaker, which combine unique VR gameplay mechanics with magical fairytale worlds.

At the beginning you will find yourself in the cave of an ancient tree that houses a living room, machines and a clockwork. The eponymous last owl has long disappeared and the operation is at a standstill. The goal is to bring this mysterious place back to life and save the sinking tree – and everything related to it.

But how? Many, many hands are needed to get the clockwork going again. Don’t worry: right at the beginning you’ll find a pair of magic gloves that will give you a superpower: You can record movements and create clones of yourself.

Flip a switch, pass an object or turn a crank, and you’ll be replaced by a mechanical journeyman who will repeat your actions until you relieve him of his duties. By stringing such clones together, you create veritable factories whose hustle and bustle is a feast for the eyes.

Effortless cloning: Me, myself and I work like clockwork

Using a terminal, you can switch between different levels and tasks. First and foremost, you need to do one thing: find and plant seeds, collect the resulting fruits and vegetables and throw them into the designated container. As the game progresses, new varieties are added that require special handling and processing, and the tasks become more and more complex. 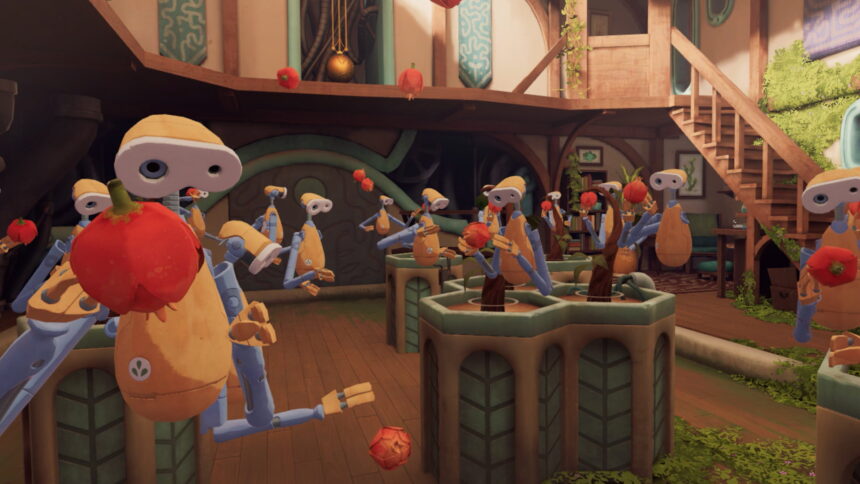 You can easily set up such a manufactory within a short time. | Image: Pontoco

It’s remarkable how flawlessly cloning works and how much freedom it gives you. Since you are free to move around, there is a lot of room for improvisation, different approaches and nuances in execution. The goal is clear, but it is up to you how you achieve it. It’s great fun to explore these possibilities.

The automation and its abysses

The game is embedded in an interesting story that provides context to the puzzles, progresses after completing the tasks and gradually reveals the secrets of the tree and its clockwork.

You’ll take on the role of a young woman who spent a few years in the tree as a child and knew the last owl maker well. During your mission, you’ll talk over the radio with a colleague and find old audio recordings in which your character talks to the janitor. Thus, you’ll gradually learn more about the tree and the automation mania of its last mistress.

I haven’t finished The Last Clockwinder yet, but according to the responsible studio Pontoco, the main story offers a playtime of four to six hours. Those who want to optimize their factories will probably need longer.

The Last Clockwinder is best played standing up and with a lot of space: the more freedom of movement you have, the better. In my test version, I could only move around via teleportation, which was particularly annoying when playing while sitting. However, fluid locomotion is in the works and will be added after release.

I tested the game with a Meta Quest 2 native and via Air Link. The latter is only slightly different graphically from the mobile version: It offers a higher resolution as well as nicer lighting and particle effects.

The Last Clockwinder will be available for purchase here on June 2, 2022: