The Atlas mystery review: Escape from the movies

The Atlas Mystery combines escape room puzzles with a unique setting: an enchanted movie palace. Is it worth the entry price?

The year is 1951 and the fabled Atlas Theater is about to reopen. You’re the fresh-faced manager tasked with sprucing up the aging house.

It’s been many years since movies were shown at the Atlas Theater. Its owner, Hollywood legend Oliver Westin, was mysteriously shot to death in his own movie theater in the 1940s. After the movie palace began to be haunted, the Atlas Theater closed its doors.

Atlas Mystery Review in a nutshell

Atlas Mystery offers familiar escape room fare in an interesting scenario. Those who like “The Room VR”, “I Expect You To Die 1 & 2” and “A Fisherman’s Tale” will enjoy “Atlas Mystery” – but only for about two to three hours.

Atlas Mystery will appeal to you if you …

Atlas Mystery will not appeal to you if you …

The Atlas Mystery is a typical escape room game. You move from room to room and solve puzzles that are quite different in terms of difficulty and originality and are sometimes more, sometimes less believably embedded in the game world.

The further you advance, from the lobby to the projection room to the cinema hall, the more you’ll learn about the history of the Atlas Theater and its dazzling owner. Notes, letters and newspaper clippings give clues about what happened in Westin’s life and became his undoing.

As the game progresses, you feel like you’re being guided by an invisible hand that’s driving you to solve the murder. Pretty cool.

The VR game has a pleasantly creepy atmosphere and does without clumsy shock moments or disturbing scenes, which is why it can be recommended even to scaredy-cats. There is no real horror here.

Inspired by the history of cinema

Much more exciting are the puzzles inspired by the beginnings and history of cinema: For example, you have to operate a so-called zoopraxiscope or cut together a film track and project it on the wall. It’s a pity that these elements are only superficially implemented. I would have liked to see much more and deeper puzzle mechanics of this kind.

The VR game doesn’t always exploit the potential of its great scenario in other respects, either: The story is somewhat awkwardly told and comes to an abrupt, unsatisfying end.

The game’s biggest shortcoming is the lack of polish, which is noticeable in many places: for example, the clumsy hand interactions or the fact that you are often positioned too high or too low when sitting to interact with game elements.

The graphical presentation largely does without coherent lighting effects and looks a bit sterile here and there, but it captures the architecture and interior design of the time authentically. There are nice details to marvel at here and there, such as historical slot machines. Outstanding is the soundtrack, which reproduces perfectly the mood of the 50s and makes up a large part of the (creepy) atmosphere. 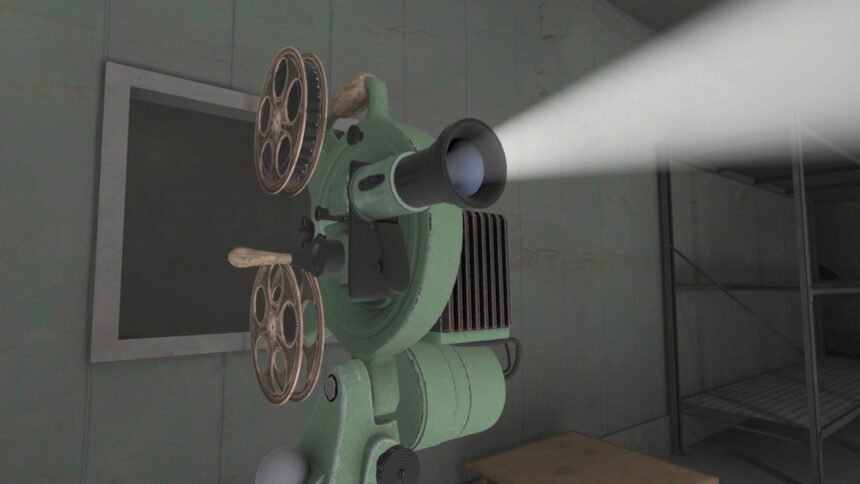 Those who want to try an escape room game in virtual reality for the first time are better off with The Room VR, I Expect You To Die 1 & 2 and A Fisherman’s Tale. Old Escape Room hares or cinema fans should give the game a chance, as long as they consider a playing time of two to three hours maximum to be sufficient. I felt well entertained during this time.

I played both the PC VR version and the native Quest version. Except for the higher resolution, I couldn’t notice any differences.

You can buy Atlas Mystery here: