Sharp produces over one million VR displays per month – report


Foxconn subsidiary Sharp’s VR involvement appears to be turning into a lucrative business. According to a report by Nikkei Asia, the Japanese company set a new record from October to December 2021. During this period, more than one million “high-end VR displays” were shipped to VR glasses manufacturers every month, according to anonymous sources with insight into the company’s strategy.

According to the report, Sharp has become the largest display supplier for the Meta Quest 2. The Japanese newspaper estimates sales of corresponding LC screens at more than $200 million, at an estimated cost of $50 per display, based on its analysis and interviews.

More than one million displays a month for virtual reality

The easing of supply problems for components, for example, in required chips, would have favored the success. In addition, success has been fueled by the hype surrounding the “Metaverse concept”, which enables shared virtual activities among spatially distant people. The increased demand for VR games and remote work also contributed to the good result.

Sharp’s focus on developing VR hardware started in 2016 with its acquisition by Foxconn. The Taiwanese parent company had put more resources into niche areas with higher margins, including virtual reality or the automotive industry. It was not until last year that “meaningful revenues” finally emerged in the VR segment.

“Visuals are crucial to the experience in the metaverse. Sharp’s yearslong efforts in the VR arena would give the company an edge in securing a leading position in the booming metaverse industry,” one of the sources told Nikkei Asia.

An official statement from Sharp confirms the basic direction, saying the company has focused on the growing virtual reality and augmented reality businesses, among others, in recent years.

In the future, the number of LC panels shipped will be greatly increased, a spokesperson told the newspaper. “Ultra-high definition technologies” from the company and related fields are “indispensable” for VR and AR, he said.

The company’s largest shareholder Foxconn has also already voiced its support for a VR-friendly strategy. The company will definitely secure its place in “Metaverse-relevant” supply chains, Chairman Young Liu said. 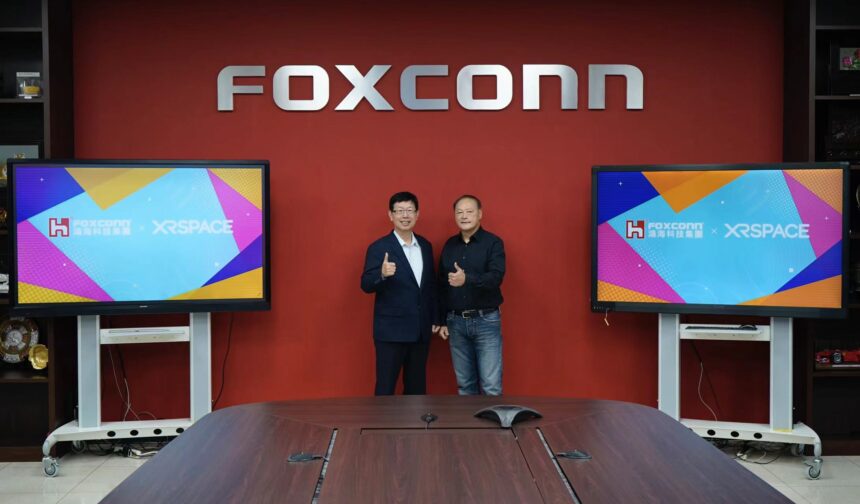 Taiwan-based Foxconn and XRSpace agreed to a strategic partnership in February. | Image: XRSpace

The company, known for iPhone manufacturing, had also entered into a strategic partnership with XRSpace in February. The company, which is also Taiwanese, offers spatial digital models for exhibitions and events, among other things. Foxconn announced plans to invest $100 million in the partner over the long term, with a $15 million investment in the startup phase.