Not only Real VR Fishing (review) is an incredibly relaxing time with the VR headset. Publisher Ultimate Games has also recognized the enormous relaxation potential of their Ultimate Fishing Simulator. Part 1 received a paid SteamVR update in 2019, which sold around 60,000 copies according to the manufacturer. Ultimate Games sold 350,000 copies of the main game.

The sequel entered Early Access on August 22, and a VR version is in the works this time as well. It is scheduled for release in about six months for Meta Quest (2), Valve Index, HTC Vive, Windows Mixed Reality, and VR headsets from Pimax.

In the past, fishing games still primarily caused a stir with their exotic status or obscure controllers. In virtual reality, however, the feeling of presence in front of idyllic natural scenery increases immensely. A study in cognitive science, for example, showed that during a VR walk, even a simple planting of greenery made the test subjects significantly more relaxed.

There are fishing spots in the USA (Jackson Park), Poland (Zalasie Summer Resort), Germany (Kiel Canal), Slovakia (Mountain River), and Russia (Kurile Lake), as well as Thailand (Blue Bay). Here, anglers are probably not even disturbed by whirlwinds – unlike in the real world.

In addition to 60 species of fish (in Kiel, for example, pikeperch and trout), more than 200 equipment items await experts. These include rods, reels, lures, and fishing poses as bite indicators. A new underwater camera captures in detail how various fishing techniques work, according to the studio. Other improvements include new dynamic water and smarter fish. Boats, aquariums, and various abilities are also included.

New developer studio Mastercode (Part 1: Bit Golem) is primarily focusing on authenticity. Those who are more in the mood for uncomplicated arcade fishing might get their money’s worth with Bait from Resolution Games or Monster of the Deep: Final Fantasy 15.

Ultimate Fishing Simulator is available for $16.99 as Early Access on Steam. The VR version will follow in six months. Then the conventional full version will also be released for the PC and various consoles. 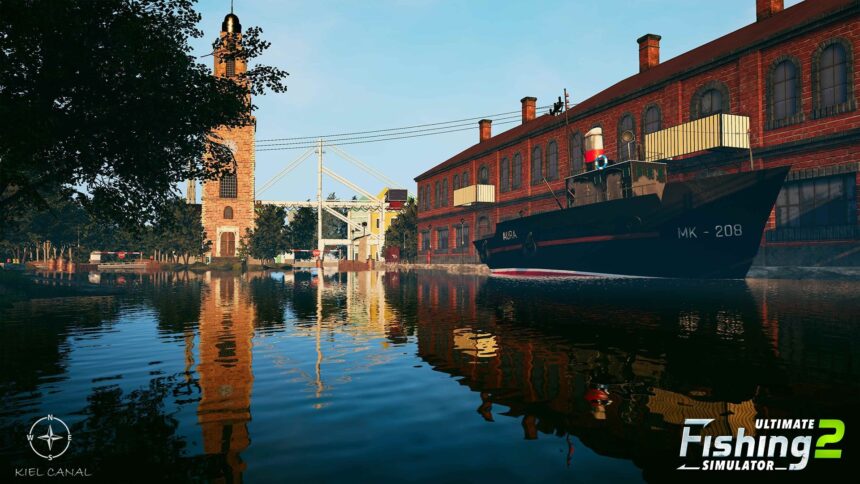 The Kiel Estuary of the Kiel Canal is also represented. | Image: Ultimate Games

Make sure you buy the correct version in the Steam store. One of the bundles includes the predecessor with its VR DLC, but no VR support for part 2.