Showdown was first introduced in 2014 and caused open mouths back then. Epic Games used the short tech demo to show what a graphically high-quality VR game could look like. It was created on the basis of Unreal Engine 4.

When you start the VR experience, you move in slow motion through an impressive action scene. On the left and right, armored special forces fire at an attacking robot, while bullets whistle through the air and missiles hit the ground.

Even back then, you could switch between different rendering techniques and pixel densities at the touch of a button to test the performance of the computer system.

Six years after the release of Showdown for Oculus Rift, Meta has ported the demo to Meta Quest 1 and 2, aiming to preserve the graphics of the PC VR original as much as possible.

The new demo runs at 90 frames per second on Quest 2, thanks to a new rendering technique that squeezes up to 70 percent more performance out of the standalone VR headset by rendering VR apps at half frame rate instead of full. Every missing second frame is artificially generated, which saves a lot of performance. The rendering technology is called Application Spacewarp or AppSW for short. 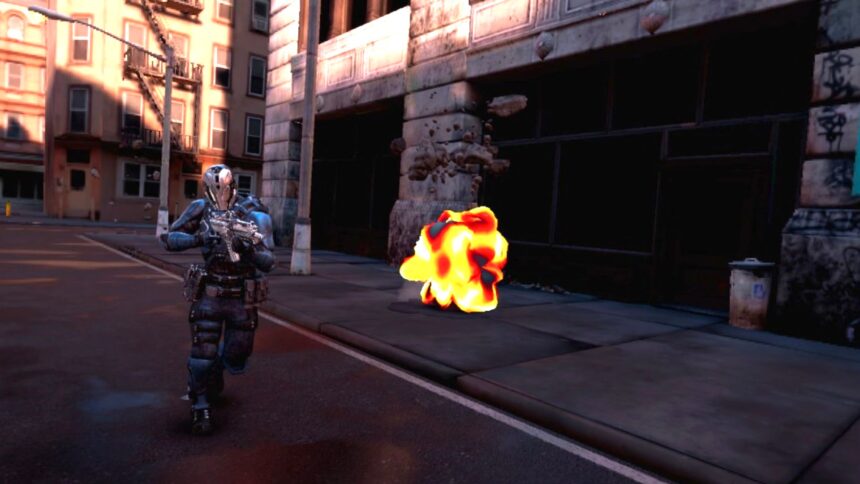 According to the screenshots, the graphics don’t quite come close to the PC VR original (see cover image). | Image: Epic Games / Meta

“To reach that mark, we had to significantly optimize CPU and GPU performance for the mobile renderer,” Meta writes in its own developer blog.

On Friday, an article appeared that introduces the new Showdown demo, examines performance gains enabled by AppSW, and shows developers how to test the effect of AppSW in their VR apps.

The rendering technology has to be implemented and optimized by the developers, so it’s not a no-brainer. The effort can be worth it: AppSW can help developers go from 72 to 90 or from 60 to 72 frames per second, Meta says.

Showdown: Try AppSW for yourself

In Showdown, AppSW enables more effects from the PC VR version while maintaining a high FPS number. Meta cites a tone-mapping effect as an example, as well as significantly more particles for bullet collisions and explosions.

You can test and compare the two demos for free. You can find the PC VR demo in the Rift Store, and the Quest version in the App Lab. In the latter version, you can activate a render menu by pressing the B button and then try out different render settings by pressing the A button:

Meta promises a second article in the near future, which will explain further Showdown optimizations and give developers concrete advice.

To my knowledge, there is only one VR game in the Oculus Store that uses AppSW: the survival title Green Hell VR. Thanks to AppSW, Quest 2 can render a dense jungle, but the port doesn’t come close to the graphical quality of the PC VR version. But it will probably take a while until studios know how to exploit the rendering technology.