Sony’s first VR headset suffered from technical weaknesses and a chronic lack of games. Sony could fix both problems with Playstation VR 2.


The Playstation VR 2 hardware speaks for itself: high resolution, more comfort, integrated room tracking, only one cable to the PS5, and hand controllers with innovative haptics. The new eye-tracking system could literally be a game-changer, since it can offer better graphics and new forms of interaction at the same time.

Sony has to improve the games

But what good is the best hardware without interesting software? Exactly. Playstation VR started strong with Resident Evil 7 VR, but hardly followed suit in the following years. Among other things, this was shown by the monthly download charts from the Playstation Store, where the same four or five titles were in the top group for years. Only rarely could newly released games break into this phalanx.

During an investor presentation, Sony’s Playstation boss Jim Ryan now revealed that PSVR 2 will launch with more than 20 “major” games – both first- and third-party titles. Sony is investing “a significant amount” in partnerships with indie and third-party studios to offer attractive VR content on an ongoing basis from launch, according to Ryan. 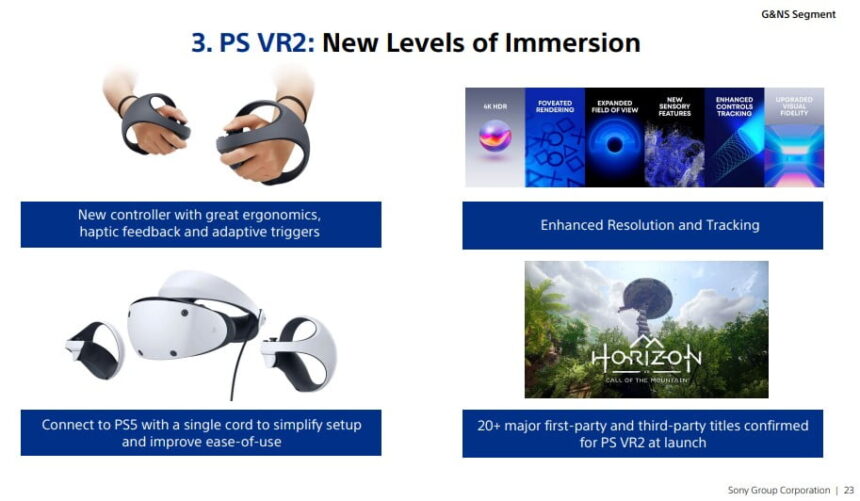 “That energy, that effort and that money will continue to grow as the installed base of PlayStation VR 2 headsets grows also,” Ryan said.

So far, Sony only announced Horizon: Call of The Mountain, without elaborating on the scope of the title. A common criticism of Sony’s first VR headsets has been that there are more short VR experiences than full-fledged VR games.

Sony is reportedly focusing more on AAA games for PSVR 2 as a result, and is also planning remasters of PSVR games that could look much nicer and be much more playable thanks to the hardware upgrade.

That PSVR is as good as dead was recently shown by the very well-rated VR game Moss 2, which started with extraordinarily poor sales figures according to PSN statistics.

With Playstation VR 2, Sony needs to rekindle the enthusiasm for VR gaming among Playstation gamers – in 2016, this was almost a no-brainer with PSVR 1 due to the huge VR hype – and also reactivate existing VR players and attract new ones.