The standalone VR headset Pico 4 captures first market share on SteamVR. Quest Pro, on the other hand, is hardly noticeable.

Pico 4 is considered the first serious competitor for Meta Quest 2 (review) and launched on October 18, 2022 in 13 European countries as well as Japan and South Korea. It is unclear if and when Pico 4 hits the largest VR market, the US.

The device is primarily intended for standalone use like Meta Quest 2. However, it supports wired or wireless connection to a PC including for use as SteamVR glasses. Both work very well, as MIXED contributor Ben found in his Pico 4 test.

Valve’s monthly hardware and software survey covers all VR headsets that connect to Steam at least once in that month and whose users participate in the data collection. The statistics include the percentage of SteamVR users out of the total Steam user base.

The highest recorded value to date is 2.31 percent (May 2021). In November 2022, it was 2.03 percent. Assuming that Steam had an average of 132 million monthly active users last year, SteamVR should have around 2.7 million users.

Percentage of users by headset

The following statistics show the market shares of VR headsets covered by Steam in November 2022. Devices that have less than half-of-a-percent market share are not listed.

VR users exclusively on Meta platforms and Viveport who have not installed Steam or participated in the Steam data collection are not captured by the statistics, nor are PSVR players and users of Meta Quest 1 & 2 who only use their VR headset standalone. Accordingly, the SteamVR statistics only reflect a small part of the entire virtual reality market.

Where Pico and Meta stand

Pico 4 started securing market share as early as October 2022, but the device did not see a larger impact until November. The market share increased by 0.48 percentage points from 0.19 percent to 0.67 percent.

This means Pico 4 grew faster than any other VR headset (at least, its SteamVR use did). The Meta Quest Pro (review), which also launched in October and is four times as expensive, is likely reflected in the “Other” category not shown above, which grew by 0.13 percentage points.

More important is how the device performs after the holiday shopping season. If the Pico 4 continues to gain, it could overtake HTC Vive Pro 2, HTC Vive Cosmos, and HTC Vive Pro next month, and maybe even make up more ground.

The SteamVR statistics only provide relative and indirect information about the actual sales success, especially regarding Meta Quest 2, since both devices are primarily used in their standalone functionality.

For Pico, however, the race to catch up has just begun, as the following chart of the SteamVR market shares shows. This chart adds up all VR headsets of one manufacturer or platform (Windows Mixed Reality). 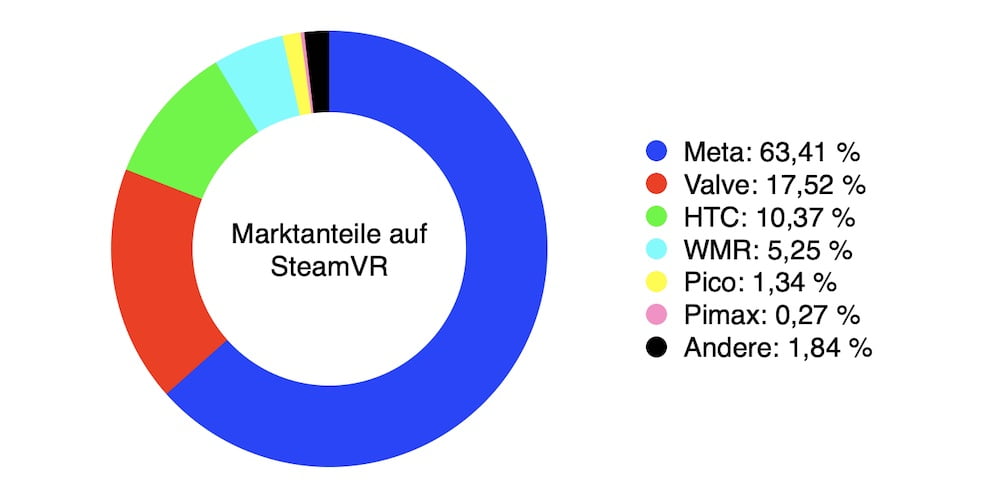 How often and intensively SteamVR headsets are used cannot be gathered from the monthly Steam survey. The following statistic, which shows the monthly average of maximum simultaneous SteamVR users, gives a rough idea.

This number reached a new high of 24,000 in January 2022, which decreased in the following months and amounted to about 15,000 in November. For the end of the year, an increase is expected due to seasonal factors.

The PC VR market has hardly grown in recent years. The most obvious reasons are the lack of big PC VR games and high graphics card prices.

Valve was only able to give PC VR a temporary boost with Valve Index (review) and Half-Life: Alyx, and has since left the platform to its fate. If and when the company launches new hardware and software and breathes new life into SteamVR is currently unclear – despite rumors of a new device called Deckard.

It’s possible that some high-quality PSVR 2 games leak onto SteamVR in the upcoming years. That way, more PC VR fans would have reason to fire up their devices again.