Nothing to hide: Among Us VR generates millions in sales

The multiplayer phenomenon Among Us has also been well received in virtual reality, helping the studios involved generate millions in revenue.

Among Us has been playable in VR since November 10, 2022. The Christmas launch obviously paid off. In less than ten weeks, more than one million users bought the VR version of the devious multiplayer game, according to series creator Innersloth and its partner studios.

Responsible for the VR version are the VR studio Schell Games (I Expect You to Die, Until You Fall) and the developer Robot Teddy, which specializes in VR implementations. The relatively low price of only about $8 (Steam) and $10 (Quest, Rift) might have helped the sales figures.

Among Us VR surpasses one million units sold

The game is similar to the PC version: Traitors are hidden among the crew of a spaceship, trying to sabotage machines or murder fellow players unnoticed. During crisis meetings, the saboteur, disguised as a human, must act as inconspicuously as possible.

The other players will often suspect the wrong person and, in the worst case, decide to throw him out of the airlock. In keeping with the game’s social focus, Schell Games focused on motion control for secret and telltale gestures in the VR version.

The participating studios provide insight into further statistics of the VR experience. Four million games have been played to date, with an average of 44,000 games played per day. Players from 122 countries have spent a total of more than 89,100,000 minutes questing, sabotaging, and betraying.

Despite its success, the VR version still has room for improvement, as it lacks some features of the original. A patch on December 13th made it easier to play with friends. Future updates should include new maps, custom lobby settings, and moderation features for the in-game chat. 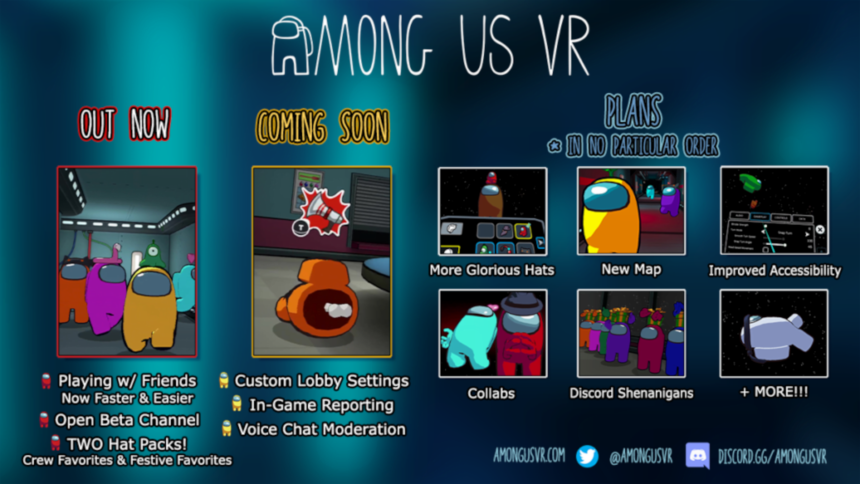 A comparison to the original

The original game was released in 2018 and took off on Twitch in late 2020, before the highs subsided a bit. According to market research firm Superdata Research (via Screenrant), Among Us reached more than 500 million players by November 2020.

The majority of them were using the free-to-play versions for iOS and Android (97%). The PC version, which was only played by 3% of participants, still accounted for 64% of revenue. The Switch conversion was also successful, with more than three million sales by December 2021. The numbers for the VR version are in a lower range, but a success for the niche market of VR games.

Virtual reality has its own hype phenomenon with the unusual catching game Gorilla Tag, which has already earned the studio $26 million in in-game sales. A Playstation VR 2 conversion is also in the works.