GameVRoom lets you play PC games from Steam directly in the VR headset, controlling them with VR controllers and motion.

Publisher Fast Travel Games announced a VR app today at a VR game showcase that lets you stream regular PC games to a virtual screen in your VR headset. All you need is a SteamVR-enabled headset.

GameVRoom lets you play Steam games in your VR headset

According to Fast Travel Games, you can use all the games from your Steam library with GameVRoom. They are streamed to a virtual screen within the VR environment that can be placed and resized to your preferences.

You can use the VR controllers on your VR headset for gaming. Mouse, keyboard or gamepad are emulated and adapted to the VR controls. GameVRoom offers extensive options for configuring key assignments and actions that you trigger through movements.

This should allow you, for example, to swing a sword in a conventional PC game like in Broken Edge VR or Until You Fall. It should also be possible to reach over the shoulder to draw a sword or reload firearms with a hand gesture. 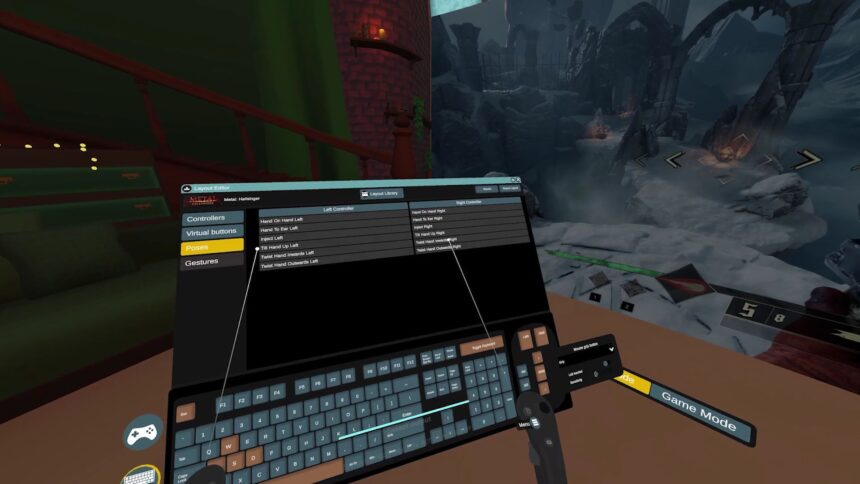 In GameVRoom, you can customize the controls of PC games to the VR controllers. | Image: Fast Travel Games

You can also assign in-game actions to virtual buttons and spread them all over the room. Trigger an in-game dodge roll or jump with a single touch. Once you’ve created a custom control setup for your favorite game, you can share it with other players.

Virtual couch co-op for up to four players

GameVRoom’s virtual environment is also customizable. You’ll be able to choose between an apartment or the interior of a spaceship, or create private or public spaces to meet with other players.

According to the publisher, you can play multiplayer titles together in the virtual environment or watch others play. Up to four people should be able to participate in co-op games within GameVRooms via split screen. Another interesting feature: the control of single-player games can be divided among several players.

GameVRoom will launch in Early Access on SteamVR on December 15, 2022. At launch, Fast Travel Games is offering a 10 percent discount, which will make the VR app available for $9.99.