The lens is one of the core components of see-through AR headsets. Called “combiners” in technical jargon, they combine natural and digital light for believable augmented reality.

Ideally, AR lenses must meet a whole range of requirements:

The most commonly used combiners are waveguides, which are used in Hololens 1 and 2 and Magic Leap 1 and 2, among others.

“A HOE is basically a thin film —comparable to a human hair— that lets almost all the visible light pass through it with no effects while reflecting one or more selected colors in the desired way. HOEs forAR glasses are therefore totally transparent to almost all the real-world light but reflect almost all the light projected by a display (which must use only those few selected colors that interact with the HOE, of course). The physical concept of HOEs is quite simple, they are extremely power-efficient and low-cost and can be directly embedded in a conventional prescription lens.

” Creal writes In a September whitepaper.

HOE combiners are not an innovation. Sony, Intel, and North already developed and used them for AR devices. A subgenus of the holographic lens could also play an important role for VR headsets in the future (see Meta’s Mirror Lake prototype).

What makes Creal’s new HOE combiner special is that it supports the company’s proprietary light field technology and addresses the biggest drawback of previous HOEs: the minuscule eyebox, or the area where the holograms are projected into the eye. 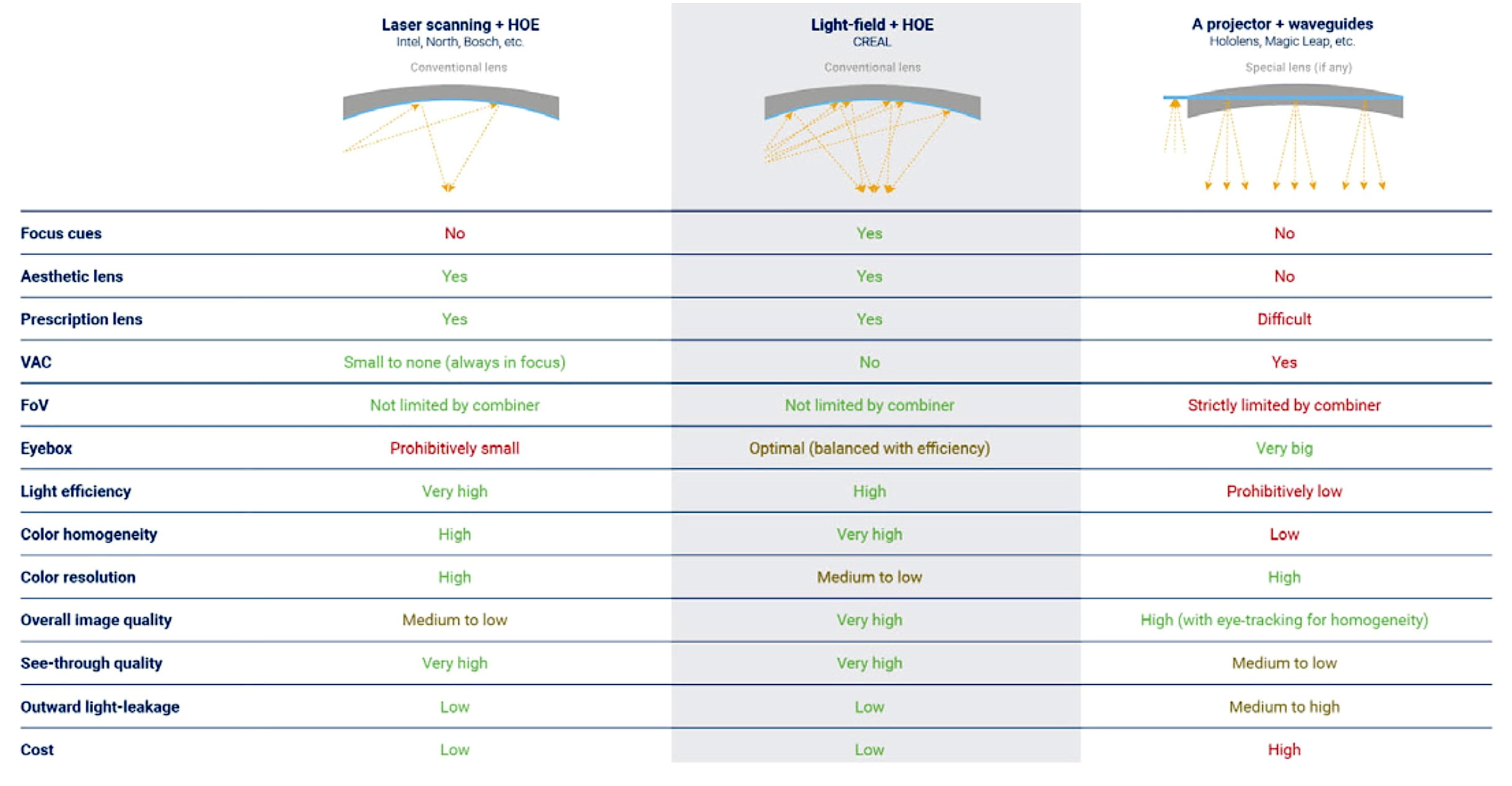 In the white paper, Creal compares the advantages and disadvantages of various optical AR systems. Creal’s light-field HOE is shown in the center, with waveguides on the right. | Image: Creal

While the holographic AR lens is new, Creal has been working on its own light field technology for many years and has already presented several VR and AR prototypes.

Creal’s light field representation mimics the behavior of natural light. The focal planes are therefore already included in the image information and do not have to be simulated separately (see this explainer). This allows the eye to focus naturally, which solves the conflict between vergence and accommodation.

The September 2022 video above illustrates how the technology works using the latest AR prototype as an example. Note the focal change between foreground and background depending on what the camera is focusing on: once the hologram and hands, once the background.

Creal’s new HOE lens is not yet seen in action here: According to Creal, it will be integrated into a new headset prototype with light field display in early 2023.