Microsoft Flight Simulator pushes even the latest VR computers to their limits. A third-party provider wants to enable more performance.

If you want to get a smoother and sharper VR experience out of the resource-hungry Microsoft Flight Simulator, the “OpenXR Toolkit” could be an important tool for you. The free, open-source software for Microsoft’s flight simulator is expected to support eye-tracking starting in early April.

This enables “dynamic foveated rendering” in virtual reality, where only the areas at the focus of the pupil are rendered with the highest detail. The surrounding areas are rendered at a lower resolution, which reduces the load on the graphics card.

The prerequisite is a VR headset that supports eye tracking using the OpenXR standard. This includes the Varjo Aero, according to a team member in the subreddit r/virtualreality. Whether the Vive Pro Eye is also compatible is still unclear, he said.

Microsoft Flight Simulator is planned to be the first supported app. Later, other “AAA titles” are to follow. Technically, the “OpenXR Toolkit” is a layer of an Application Programming Interface (API). This creates an intermediate step between the game and the OpenXR runtime environment, which in turn communicates with the operating system, drivers and the VR compositor.

In this way, the software can currently “cheat” in features that are not offered in the actual VR app itself. So far, the OpenXR Toolkit supports the upscaling of low-resolution images. First, the software “lies” to the game and requests an image with too low a resolution, which is upscaled again by the toolkit with AI support after delivery. 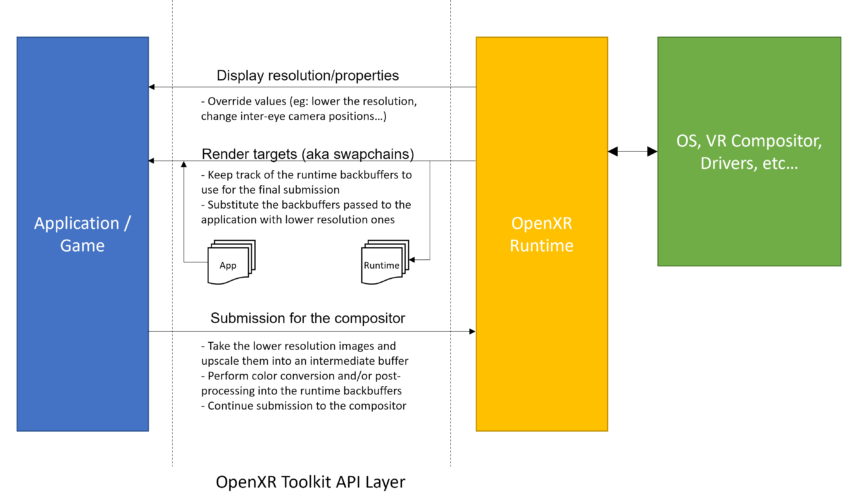 In addition, the developers of the OpenXR Toolkit have already implemented hand tracking and static foveated rendering. With the latter, the image gets coarser and coarser towards the outside. After all, the lenses of many VR headsets display a blurrier image in peripheral areas anyway, so the full detail is not necessary there.

Matthieu Bucchianeri, a Microsoft developer, is among those behind the project. However, it is made clear in the FAQ that the OpenXR Toolkit, which is available for free on GitHub, has no connections to Microsoft and is only developed on the side. The team is looking for support, for example, via feedback in the official Discord channel.