Meta’s Activity Set makes VR sports with the Quest 2 more enjoyable. Straps attach the Quest controllers to the back of the hand, just like you know it from the Valve Index controllers.

After a variety of third-party sports accessories for the Quest 2, Meta will soon bring an official Activity Set. The three-pack includes a wipeable headset insert, two hand straps, and two adjustable back-of-hand straps.

The latter are interesting for VR enthusiasts and VR athletes alike: Three years after the Valve Index controllers, Meta finally officially creates a way to attach VR controllers to the hands so that they stay in place even when the hand is open. Especially during active games, throwing movements or fast boxing blows, the Quest 2 controllers can no longer slip out of the hand so easily.

To attach the size-adjustable hand straps to the controller, Meta replaces the battery cover: The original cover is removed and replaced with a new one, to which the new straps are attached. The fabric wristband is similar in width to the Index at 35 millimeters. 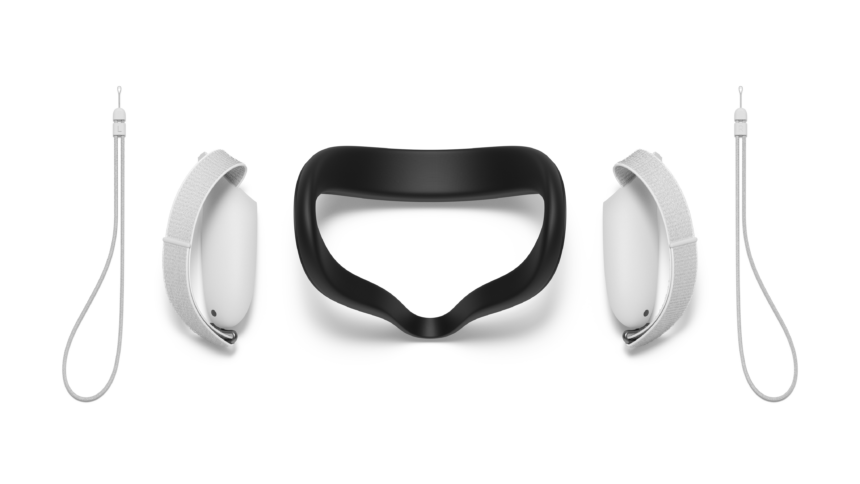 Also included is a wipeable replacement face pad with a polyurethane (PU) plastic surface, comparable to the ones from VR Cover. A price has not been set yet.

After the Activity Set, there will be more accessories. However, these will be licensed partner products from other manufacturers that run under the “Made for Meta” label.

Meta also announced that fitness tracking for Meta Quest’s companion app on smartphones will be released later this year. Tracking will also be available for the Health app on iOS. Meta is also planning a new feature for sharing progress with friends.

The fitness API, which will launch in the fall, will allow users to share data with select apps to unlock accurate stats or new levels.

In addition, the fitness app Supernatural will get new “notes” that are smashed with knee bumps. This way, the subscription-based fitness program is supposed to work the lower body more.

The studio did not yet provide details about VR leg tracking without a hardware tracker. In addition to the recording in the camera periphery, a prediction of the movement and body positions would also be possible – using sensor data that typically occurs during a knee kick. Recently, a video from Meta researchers showed how the Quest 2 enables full-body tracking thanks to artificial intelligence.

The integration of the knees in Supernatural probably works a bit differently than the avatar legs planned by Meta: In the social app, Meta only shows the assumed position of other people’s legs, which can deviate from the real movement. You won’t see your own VR legs there yet. After a test phase and technical optimizations, Meta’s new avatars will also appear in other apps.

Finally, towards the end of the year, the VR fitness app Gym Class – Basketball will end its Early Access and move to the regular Quest Store. In keeping with its name, the app is all about basketball techniques, including online duels.