The new Meta accounts will be rolled out gradually worldwide starting immediately, according to the Oculus Blog. Users who can not yet create a Meta account and Meta Horizon profile should see the update reach them soon. The following video shows how to set up the Meta account.

In August, Meta will introduce a new account system for Quest 2, which will probably also apply to future XR devices like Cambria. Meta emphasizes that the new Meta accounts are not social profiles. These will continue to exist, albeit in a new form.

The alternative account system was first announced by Meta CEO Mark Zuckerberg himself in the fall of 2021, but until now, there was no launch date. That is now certain: Meta’s new account system is scheduled to launch in August 2022. Users will then be able to log into Quest 2 with their Meta account instead of their Facebook account.

The Facebook requirement for VR use has been a contentious issue since its introduction with Quest 2, where Meta links the use of one service (VR) to another (social) and also merges data streams. According to Meta, the new Meta accounts are explicitly not social profiles.

The new Meta account is mandatory for all VR users and must be switched in August. Meta wants data on name, e-mail address, telephone number, payment information and date of birth. This data is not publicly viewable. The minimum age for a Meta account is 13.

“Your Meta account is how you log in and your Meta Horizon profile is how you show up,” Meta explains the difference between the two systems. 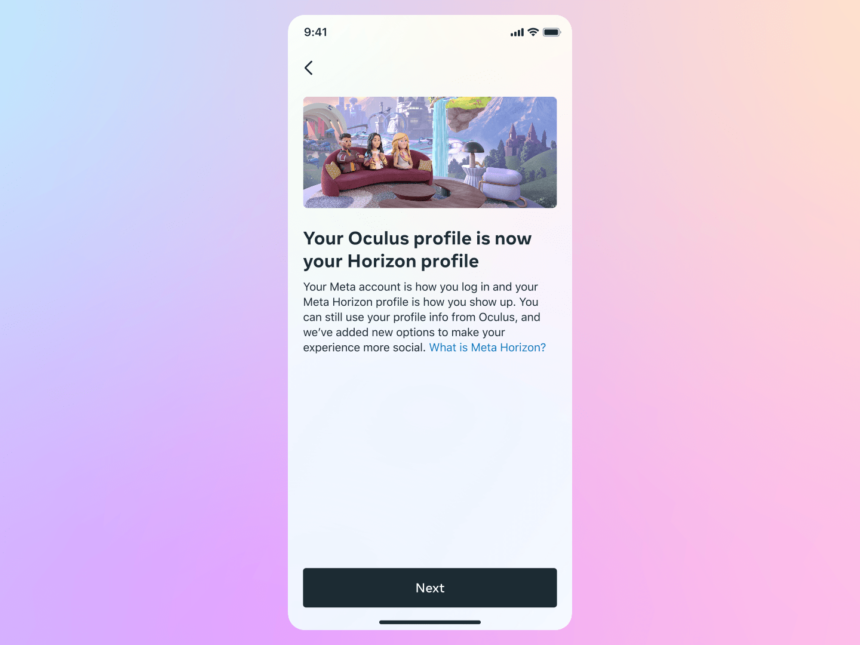 The Horizon Profile is the same as the old Oculus account in terms of privacy. In its data guidelines, Meta describes data collected via the Horizon Profile. This includes information about VR usage in general, but also about body, room, and voice data, and fitness information, depending on which app you use.

When hand tracking is enabled, Meta also receives information about hand size. This information is partly necessary for the operation of the VR glasses and, according to Meta, is also used for measurement, analysis and other advertising services.

Horizon profiles otherwise have the usual privacy options. For example, you can specify whether the profile is visible to everyone, to selected people, or to no one but yourself. You can set up one Horizon profile per meta account.

Quest 2: Market launch in Germany thanks to Meta accounts?

The original merging of Facebook and Oculus accounts is probably one of the reasons for the voluntary sales stop of Meta’s VR headsets in Germany. The German Federal Cartel Office sees the mandatory linkage of different use cases and the merging of data streams as a possible violation of competition law.

You can read the entire course of the still ongoing legal dispute between Meta and the Federal Cartel Office in our chronicle Meta vs. Germany.

The Meta account could resolve both conflicts, potentially setting the stage for a Quest 2 and Cambria launch in Germany. Meta’s German PR department, which hasn’t paid much attention to VR lately, recently organized another press event – another hint that things could start soon.